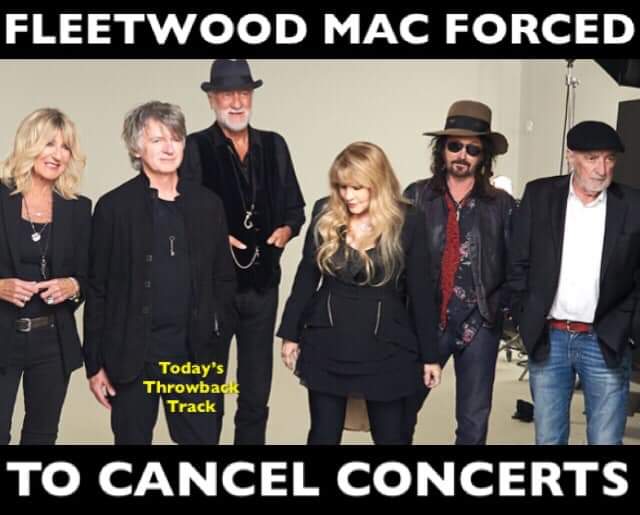 For The Second Time In Six-Months…

Fleetwood Mac has been forced to pull the plug on performances,.due to an ill Stevie Nicks.

Fleetwood Mac recently postponed concerts in Boston and Philadelphia,and among the concerts the Rock & Roll Hall of Famers canceled was their Jazz Fest appearance,in New Orleans…scheduled for May 2.

Ironically,.The Rolling Stones were slated to headline Jazz Fest,but due to frontman,Mick Jagger’s recent heart surgery…the band had to back out.
Fleetwood Mac were set to take their spot,…up until today’s announcement that the recently inducted two-time Rock & Roll Hall of Famer, Nicks was unable to perform because she had been suffering from the flu.
Though feeling better,.the rocker has been advised to take time to recover.

In November,.hours before they were set to take the stage at Rogers Place, in Edmonton, Alberta - Fleetwood Mac broke the bad news: Chanteuse,.Stevie Nicks fell ill and was unable to perform.
The legendary rock band has maintained a busy touring schedule with new members, Neil Finn (Crowded House) & Mike Campbell (Tom Petty & the Heartbreakers).

Lindsay Buckingham who has been a key player in the band for the majority of more than 40-years,.was booted from the band last year.

According to Rolling Stone,.the band plans on resuming their North American tour, in October.

In the meantime we wish Stevie a speedy recovery.