@Alley_Cat mentioned breadmaking in the Coronavirus thread.
I knew about making a sponge as a yeast starter, but then decided to read a bit more.
I remembered grapes as a source of yeast and found this
https://www.food.com/recipe/nancy-silverton-s-grape-sourdough-starter-316306
Then beer
https://www.bbc.co.uk/blogs/food/2011/07/the-ale-barm-method-worthy-of.shtml
Any other thoughts on creating food with limited resources when supermarket shelves are empty?

Breadmaking is not difficult. Lots of recipes out there, but, I’ve been making our own bread on occasion for years :

Basically all you need is the appropriate flour (usually marked as such in supermarkets etc)
Some form of fat : butter, etc. Ciabatta bread is basically just ordinary bread using Olive Oil as the fat
Yeast : Dried works perfectly well, so don’t fret if you can’t find fresh yeast
Water - usually warm at about 50 degrees Celsius. With cold water it will rise, but more slowly.

Mix the salt, flour, yeast, fat together, and if you don’t own a food processor with the “hook” tool, rub the fat in with your fingers. Add water - don’t exceed the recipe quantity, and mix in. If necessary remove from processor bowl and knead until uniform and elastic (poke with a finger and see if the dent fills in)

It’s ready when you can rap it with your knuckles and it sounds hollow.

For those of you who don’t know : Pizza base is just Ciabatta bread.

Oh - one addition. The bit about making premixing a bit of yeast is not essential. I think you may be thinking about sourdough bread - where you retain a bit of the uncooked bread dough, and use that the next day. SWMBO is Maltese, and that lovely Maltese bread is sourdough.

Perhaps I should have carried over the first part, alleycat said that he had flour, but then wasn’t sure if his yeast at home would be viable, so the sponge suggestion was to test the viability of his yeast and then the grapes or beer as an alternative.

I have realised that my tight-fisted nature is coming in handy. I cook my own meals, I tend to do big pans of staple bolognese/chili/curry dishes and freeze off multiple portions. So I have about 30 portions of food in the freezer. A few weeks ago dried pasta was on special offer if you bought 2 bags, so I have a kilo of penne and of fusilli. Tinned tomatoes were on offer and I use a lot, so I have 8 tins in. Add that to some frozen mince, a couple of frozen chicken breasts, some onions and tins of pulses and I can keep going for quite a while. The bread should be OK for a while, I have a bag of bread flour. I feel like an accidental hoarder.
(A few weeks ago Tesco were doing an offer on loo roll with money off if you bought 2 packs of 9. I have 17 rolls left, so have offered the neighbours with kids the unopened 9-pack on the grounds they’ll go through it fast. They’ve said they won’t take it yet as they think they’re OK, but know where it is.

I looked up a few sourdough recipes some time ago, and my understabding was it was a process of natural fermentaion rather than adding extrinsic yeasts.

I love bread, unfortunately carbs are currently my enemy, but the rest of the family enjoy their bread…

Need to dust off the Panasonic bread maker I think. Used to use it very frequently.

Perhaps I should have carried over the first part, alleycat said that he had flour, but then wasn’t sure if his yeast at home would be viable, so the sponge suggestion was to test the viability of his yeast and then the grapes or beer as an alternative.

I put a load of stuff in storage 3-4 years ago when moving between properties, some of that will include tinned food, herbs, oils/sauces etc I was honestly planning to throw. Not so sure now.

Thinking about it the 3-4 bags of flour I have sourced are not ‘strong’ flour so may not be ideal for bread anyway.

Thinking about it the 3-4 bags of flour I have sourced are not ‘strong’ flour so may not be ideal for bread anyway.

Don’t worry about using ordinary flour - it makes perfectly good bread, just with the character of artisan bread be it made with yeast or sourdough.

I use a preferment with organic yeast; it helps to add flavour to bread too.

If we dispense with bread, I’m less concerned with the availability of foodstuffs than the ability for some of us to obtain if we end up being isolated by virtue of age/predisposing illness.

I have two chest freezeers and tend to forage from the ‘top layers’. I suspect 60-70% of the frozen food beneath may be inedible normally, but in a crisis who knows?

My parents died after several years of ill-health last year. There is a chest freezer at their home full of ‘ready meals’ I used to buy that I’ve neither had the time or inclination to sort out which may be handy.

It’s interesting to see in supermarkets that relative wartime luxuries (staples?) such as sugar/jam are quite abundant, not that I’d want them anyway.

Dried/fresh pasta for the kids is non-existent currently, ok you may get a few tins of Heinz spaghetti/beans/soup or similar.

What are others buying?

Home made Granola as discussed on “what are you cooking tonight and why would anybody be interested?”

No rice risotto
Grate or food process cauliflower
A little oil, crisp some bacon lardons
Add the cauli, about 100ml water and a veg stock cube, simmer
If you have peas or broad beans, add those
Serve

All fermentation is natural. After all - where did the yeast you buy come from initially?

For my sins when I was a mere slip of a boy I used to work in a bakery in Devon (UK) during my summer holidays (from age 15-17, when I eventually went off to Edinburgh University), which was where I learnt the principles of breadmaking. The usual method of repetitive sourdough breadmaking was as I describe - i.e. save a bit of the risen dough to add to the next batch. It’s why I never make sourdough myself - I’m fat enough without eating all the extra bread that would cause!

My parents died after several years of ill-health last year. There is a chest freezer at their home full of ‘ready meals’ I used to buy that I’ve neither had the time or inclination to sort out which may be handy.

I would be wary of eating very old frozen food. Not that it’s unsafe, rather that it tends to lose its flavour. 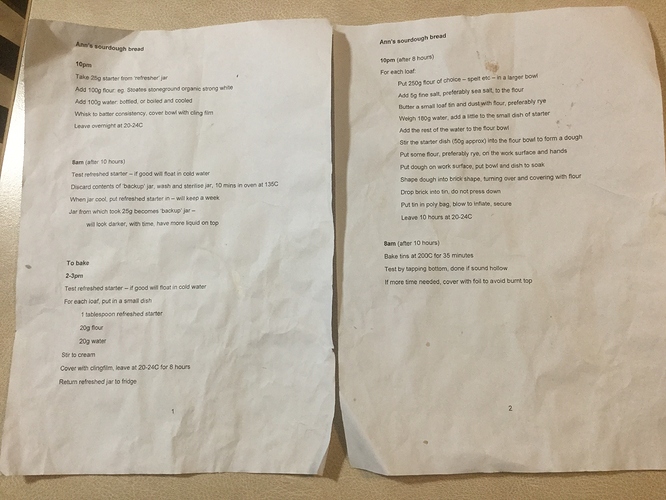 image3264×2448 1.72 MB
@Camphuw has sampled our sourdough bread. I have been making it for 2 years using a starter from friend Ann. I do now add a large teaspoon of rape seed oil as well after Camphuw’s visit. We use a hostess trolley warming compartment to incubate the starter. Ann provided the first batch. The bread is delicious.

Don’t seal the starter jar as it continues to ferment and may explode. We use 100gm coffee jars to store the starter. I use 175gm strong white and 75gm Spelt. I roll the dough into shape on a bed of Rye.

Trying to create a starter from flour and water might be problematic. The starter is special to the flour.

Full endorsement from me …
Must start my sourdough again.
Off to Shipton Mill tomorrow to see what flour they have left!

I’m not sure that is the normal method with Sourdough- I’ve been making it for a few years and I’ve spoken to several that have gone on courses and their method seems similar to the one I use.

It employs a ‘starter’ rather than keeping some dough. The starter is sort of self-perpetuating if you feed it regularly (every 1-2 days if not kept in the fridge):
Equal quantities (in my case 150g) of starter, flour and water are mixed together, it’s allowed to ferment for 12-24 hours then 150g of starter is the base for the sourdough mix; the starter certainly isn’t a dough, you can pour it.

Here’s the recipe I use:

Take it out of the mixing bowl, stretch a bit then form into a ball.

lightly oil the mixing bowl, return the dough into it, cover, then leave to rise until it’s at least doubled (generally overnight).

Then shape into a tight ball (by applying a little pressure on top while pulling it towards one to get it to turn in on itself from underneath, turn through 90 degrees, repeat probably 6-10 times.

Place into a proving basket, cover and depending on how lively the mix was place either in a warm place or the fridge.

Heat oven to about 230 degrees, with a cast iron casserole in it (maybe with 50% more height than the dough has risen to). Let everything get hot.

Put some siliconised baking paper over the dough, turn it out of the basket.
Cut a slightly curved slice using a razor in the top of the dough, running the length about 1-1.5cm deep.

Put the dough in the dutch oven, put ice at either end (under the baking paper). Put the top on fast.

Place in the oven for 25 minutes.

Take the top off after 25 minutes and leave for a further 15 minutes.

Anyway… that’s the method I use. White bread easier than brown.

Oh and once I’ve made a dough, I feed the starter again (equal quantities of starter, flour and water). Can be wasteful but the spare starter with a little bicarb can cook into crumpets (but this is always messy so I don’t often do it).

I use one of these. 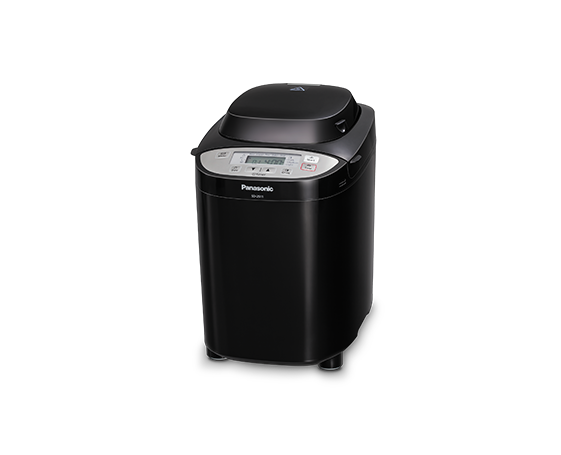 Another necessity is a good knife. This Tojiro knife is excellent, extremely sharp, as I’ve discovered to my cost a couple of times. 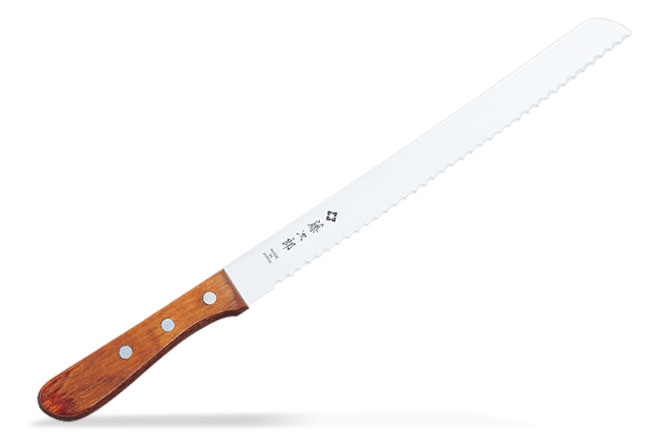 I’m not sure that is the normal method with Sourdough- I’ve been making it for a few years and I’ve spoken to several that have gone on courses and their method seems similar to the one I use.

I’m describing the way I was taught to do it. I’ve done it your way, and it doesn’t actually taste any different.

Nice to see that I’m not the only bloke here who cooks and bakes. In fact I do all our home baking, and more than half of the other cooking - although I will admit that SWMBO is a better cook than me when it comes to having all the parts of a main meal ready at the same time!

Our breadmaker (a present from daughter #1) died a year ago. I never really liked the bread actually baked in it although the taste was OK. The biggest problem being the mixer blade stuck in the bottom of the loaf, which I always finished up extracting with a pair of thin-nose pliers. The other problem was that the crust was never very crusty. I always finished up taking it out of the tin and putting it in a very hot oven for 5 minutes, and eventually finished up just using the breadmaker as a convenient mixer.

Now I use our 40 years old Kenwood mixer (recently serviced), and don’t miss the breadmaker at all.

I’m describing the way I was taught to do it. I’ve done it your way, and it doesn’t actually taste any different.

Well I gave our recipe above and I can say real sourdough has lots of taste - that’s why it’s called sourdough! Unlikely I can help with starter, although @Camphuw might be lucky.

@StephenPacker provided his. It just goes to show there is no one method. I have to say though that complete regeneration of the starter every 1-2 weeks guarantees consistency. It doesn’t take much starter to regenerate.