For the cello lovers

He’s one of the channels I follow on YouTube . Absolutely fascinating stuff. Show you why cello is mysteriously special! Enjoy

Hmm… I love the cello, and even dabble at playing myself, but this is nothing to do with cello, other that they chase some cello playing as a source of vibration: they could have chosen almost any source of different sounds.

Incorrect you must of skipped/missed it, only the cello creates that anomaly .He did say they tried many different types of sounds/ music.
Go to about 8.26 minutes

Ok, my mistake - I admit I had rather lost interest long before then and wasn’t paying much attention, just focusing a bit more when they started playing the cello. It will be a matter of the harmonic content, so I am sure other sounds would have similar effect, just not ones they tried. Dancing water droplets doesn’t explain why the cello is a beautiful sounding instrument, as the physical effect on water under the demo conditions has nothing to do with what happens in the ear and human brain.

Well umm ok thanks for your thoughts. I’m just going by what the nasa scientist/ astronaut said, which was only the cello made this anomaly. Can’t seem to find anything where human Ear and Brain came into it. Interesting you were bored of it but you still had to have a little post?

I think there is quite a lot of physics going on. It might be a bit like the photoelectric effect where light of a wavelength equal to or exceeding the binding energy of the electron causes it to be released.

In the case of water we are talking about whole molecules. Surface tension is nothing more than the imbalance of molecular forces at the surface. No idea of the magnitude of forces.

What the water drops landing on the water showed was that the droplet bounced and transferred some energy each time to the water on which waves were created. Eventually enough energy was transferred to stop the droplet separating again. The vibrating speaker was just another source of energy sometimes hastening the coalescence sometimes not. Air provides another medium to absorb energy and in theory a sensitive microphone would hear the impact.

I was drawn in by the title of the thread, as I am a cello lover (and play a little myself), but found it nothing to do with cello directly, instead being about behaviour of water droplets. It did not seem unreasonable to make that observation.

I didn’t mean to entrap you IB, it’s simply Interesting for me. Being an audio forum, I found it relative as they did say only the cello replicates this which fascinated me to the point of searching for new cello music as I have none at the moment. In hindsight I should of titled it “walking water to cello” but I still feel I would of ended up not meeting your expectations. If you didn’t learn something from that video then your none the wiser so sorry to disappoint you. Other than that I did, so I thought I would share for like minded people. That’s all I was doing. I was unaware I’ll be challenged by a scientist when we all need to learn more from science.

Water is a fascinating thing. You would think we know everything about it, but it still offers up new glimpses of its total bizarreness.

Similar to your OP of frequency behaviour. 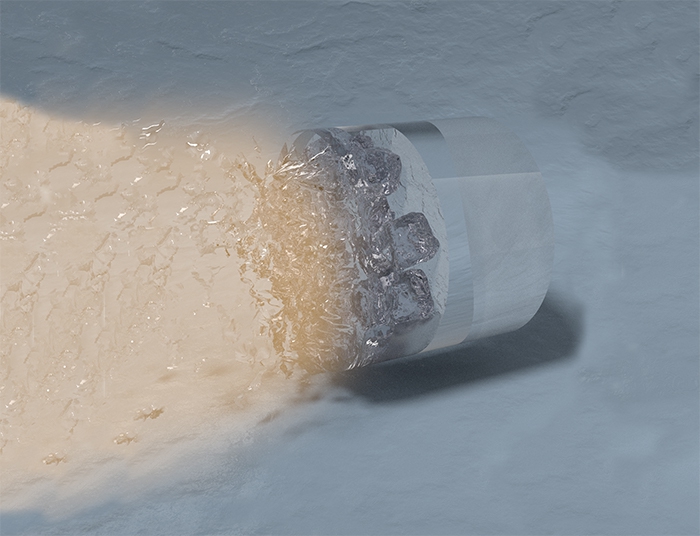 Scientists discover a new form of ice, and it's like nothing they've ever seen

Superionic ice, a newly discovered form of ice, is black and extremely hot, and it could explain a lot about the existence of planets like Uranus and Neptune.

Now that is what I call absolutely fascinating. I can recall years ago I was told if 25 Hz was concentrated/ pointed at your stomach it would make you sick, I can see why now

It was thought that only our eyes could be tricked.

I initially thought that mirrors are involved and then I thought it’s got to be done with cotton or some sort of fine thread, but obviously with the cat paw in the middle of it nope. Hmm some kind of vacuum maybe, the secret may be the tear drop shape of the water…or is it water at all and magnets are involved !!
Oh no don’t drink it pussy cat😱
But no it’s that frequency thing that you showed us

What about strobe lighting?

Pussycat put a paw right into it in the water splashed