For those who really want to spoil the pleasure

Not much in dead wax, just ABCL 5225 A 2 . Checking Discgs it’s a U.K. 1977 pressing, but there seem to be a few different ones of similar vintage. I’ve just cleaned it and will try to give it a listen tonight. 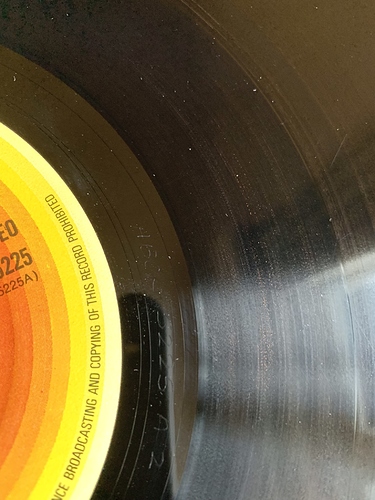 Steely Dan - Aja (MCA MCLD 19145), UK Nimbus Pressing, Hoffman Mastering is the one I have.

If anyone is interested I’ve found all the early MCLD Dan ‘Classic’ albums on CD excellent compared to later issues & ‘remasters’. Listening to the Hoffman ‘aja’ now and it’s superb.

Anyway, as I say, I’m no expert on Aja

I’d be interested to read a manifesto by someone who DID profess to be an expert then!

The best one I heard is the one issued by CISCO on the 30th anniversary of Aja in 2007.

Intrigued by last night’s Aja comparisons, this evening I just had a listen to the US issue I have of my favourite Steely Dan LP, Pretzel Logic, and I have to admit, I was a bit underwhelmed. So I dug out one of a number of UK copies - an early Probe - and… wow! That’s more like it! IIRC, the early UK Probe issues of Countdown to Ecstasy and Can’t Buy a Thrill are also excellent. the UK ABC of Katy Lied is similarly excellent, but possibly pipped by the US “Kendun”, even if the latter has a few obvious issues. I think I need to dig out my Katy Lied LPs another time…

It should have a thick cardboard inner sleeve with the lyrics printed on it. If the album in Brighton doesn’t have the original sleeve, that may be a reason it’s in mint condition. My copy is absolutely covered with scratches caused by the sleeve.

However, the dead wax reads.

Presumably the record was originally designated AB, but changed to AA. I’m wondering if the T designation could indicate it’s a test pressing.

It sounds very good, but I haven’t compared it to other AJA copies, but it’s a lot better than some other Dan albums I own.

Well, I never even imagined that so many – Richard on top – had such an inside knowledge of Aja. Personally, I have a slightly larger soft spot for Gaucho. Anyway, I checked my (CD) copy of Aja and it’s the 1999 Nichols’s last remaster.

Once I wrote on the dead forum that I though Steely Dan was the perfect music for Naim, and now I think I perhaps was right.

Best to all
M

My copy of Pretzel Logic is a bit dull, as is side one of Gaucho, which is a bit strange as side two sounds very good.

The Mofi Aja is considered in some circles as one of the most grievous examples of the early Mofi U shaped EQ - i.e. goosed top and bottom. Sometimes it works out, sometimes not. I don’t have the Mofi Aja so can’t make a judgement.

FC, according to information elsewhere, the scratched out AB1006 were probably later AA1006 reissues but pressed from original AB1006 cut stampers.

It can certainly be fun, I guess. I run a bit shy of early Mofis. I do quite like some of them, but others can be not so nice. I’m tempted to try the early Mofi Aja as it’s quite easily found these days and not so expensive. But then I ask myself, do i really need another issue of Aja…? (yes, you know the answer to this)

I find the information on the deadwax fascinating. I quite often check to see if I have an early pressing, but, the info isn’t always very logical. Who’d have thought AB was the original pressing and AA was the re-issue.

My copy of Pretzel Logic is a bit dull, as is side one of Gaucho, which is a bit strange as side two sounds very good.

Worn stamper used for one side and a relatively fresh one for the other, perhaps?

It’s possible. I notice that one of my early Probe label copies of Pretzel Logic shows signs of wear, some groove damage and noise on Rikki Don’t Lose That Number and then gets progressively better thereon. Side two is clean and clear as anything - in fact plays like new. Which leads me to believe that the first owner probably bought it only to listen to the first side, and likely lifted off the arm fairly soon after hearing RDLTN, but maybe not always…

I’ve never really spent much time on dead wax but I had to have a look at my copy of Aja.
It has AB1006 (RE-3) B in the dead wax. No idea what this could mean. Release 3 perhaps?

Is anybody ever distressed by the existence of continuous remasters and reissues and multiple editions with different sounds each? Am I the only one who wishes a disc was done like Meet the Beatles, 13 hours in a row, live in the studio no overdubbing? Or, at worst, all the postproduction one wants then all sources destroyed and only ONE available for further supplies?

I even hate like hell when I buy old CDs with extra tracks… They were left out of the final disc for a reason, I suppose.

After all, the greatest pop musician ever used to say ’ I don’t care about stereo; stereo to me is just a larger mono’.

It seems that the one whose pleasure (about Aja, at least) was spoiled is me…

Cleaned and listened to, my copy of ABCL 5225 sounds excellent. Nothing else (yet) to benchmark it to here, but it sure sounds good. I’ve also delved into Discogs for the first time and bought a copy of ABC1006 . It will be interesting to compare when it arrives.

More importantly, this thread has caused me to listen to this music properly for perhaps the first time TBH. It’s been very worthwhile to say the least. thanks for starting all this Max!