A visitor came round, put a CD in the CD5XS but not surprisingly did not realise about the puck, did a search on previous but cannot find consequences, are there any?

If the puck is not lost and CDs still play once it’s attached, all is well.

A few year’s ago now a friend’s CDX2 swallowed the puck when her grandson tried to take off the CD before it had stopped spinning.
Gently tilting the unit from side to side showed that it was indeed in there. I looked at what was involved in getting the top off, but it appeared to involve dismantling the hinge for the CD mechanism and I decided I didn’t want to do that. So I very gently tilted the box with the CD tray open and the puck fell out.

I mentioned this to my Naim dealer and he told me they once found three pucks inside a CDX2 that had been brought in by someone “because it rattles if you move it”.

Many years ago I bought a secondhand CD3 and there were a whole load of clamps that had been lost inside. Typically, if you didn’t have the clamp properly centered then as you closed the lid the edge of the clamp top would catch on the opening and it would then topple off and be pushed inside the player with the closing of the door. It must have cost the first owner a small fortune in replacements!

At least you gained some spares

No worries, puck not lost, tunes fine, the visitor relatives do not have to check what they have been left in the will

I forgot one tim to put the puck on my CD555, not the first time, but the CD took off and put grooves in it rendering it unplayable. Just replaced the CD and more careful next time. The earlier CD players with little rubber loops used to either fall of or became “soft” making the discs difficult to play. Do not leave these pucks on overnight. Perhaps they have been improved?
I lost the puck briefly on my 555. and enquiring the replacement cost, some years ago, I was given a figure of about £260. Soon found it!
Douglas.

I left the puck off a CDX2 once. Just the once. The commotion from inside the player was enough to train me never to do it again. But no visible or audible damage was done. I always used to keep a spare. As well as the very faint possibility that the CDP might swallow it, my CDX2 was of the bouncy puck variety, and they tended to wear out to the point when they couldn’t be plumped back into shape sufficiently. I think having a spare is a good practice. As well as fuses. The spare fuse in the back of the XPS2 was insufficient for normal use. If ever it had to be powered down it was even money on the fuse popping on start up.

I lost the puck briefly on my 555. and enquiring the replacement cost, some years ago, I was given a figure of about £260. Soon found it!

I’ve wanted to illustrate the insanity of the unseen parts of the 555 puck for a long time.

Richard - do remove if you or anyone sees fit. A fascinating aside on an unconsidered element. 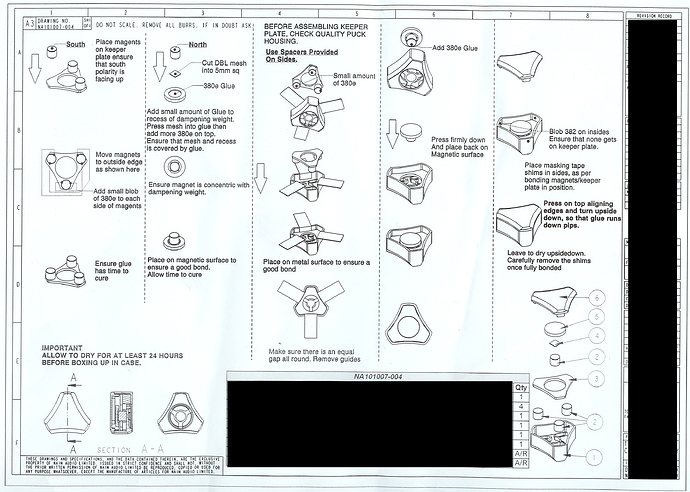 What a joy! The care in building the 555 puck implies much about the craft in all of it.

Now I know why a replacement puck costs what some would pay for a complete “hi-fi” system!
Douglas.

When I got my CD555 I asked my dealer to obtain for me a spare puck as I have always regarded the puck as a critical point of failure, and something that could easily be lost thus rendering the whole system redundant. I had one for my CDX2.2 which cost just a few quid.
So I was pretty stunned when my dealer, having made enquiries of Naim, came back and told me the price. He also told me that there would be a bit of a wait because they are hand-made and only made to order. I swallowed and ordered one, telling myself that I was buying ‘peace-of-mind’. @Adam.Meredith’s description of what is involved in assembly (apart from machining) helps explain the price, which is reassuring.

I have the original puck supplied with my 555. Never let me down in 10 years plus. Quality is never cheap.
Douglas.

Years ago, the hospital at which I worked was finally getting rid of the narrow gauge rubber catheters used in ENT surgery, and i acquired a few of them for use in replacing the bits on the bottom of my Naim CDS puck. Worked very well. Still have the CDS boxed up on top of a wardrobe.

Took me a while to persuade my daughters to use the correct way to remove the puck when taking a CD out.(tilt it, in case anyone doesn’t know don’t know).