May be an unfair subject title as I was never a big fan & therefore haven’t paid much attention to any posts concerning them.

Until earlier this year my Tull collection consisted of an old vinyl copy of Minstrel in the Gallery ( OK) & a double CD of their greatest hits (liked). I recently purchased HD downloads of Aqualung & Thick as a Brick & immediately thought that I had probably wasted about £30, before even listening to either.

I couldn’t have been more wrong. I have immensely enjoyed both & am now wonder what else I have been missing for all these years. I am sure I must have heard these albums when the were first released on cheap systems owned by Tull loving friends & just remember a bland sound with no real distinguishing features.

However, my slightly better system of today has revealed them to be highly musical, detailed & well constructed recordings that have been a delight to listen to & will be receive further listens very shortly, along with more from their catalog. A delightful surprise.

I am sure there will be plenty of JT fans to come on here & tell me exactly what I have been missing all this time!

PS - As an aside, Ian Anderson is the only human I can ever recall seeing who genuinely looks younger at 70 than he did at 20.

Let me be the first to say you’ve been missing out.

They are mostly fun, a little intense at times, but they have something for most moods. I’ve been a keen listener of their music since I was a teenager. Happy for you that you have discovered them. Enjoy the journey.

Saw Ian Anderson live at ‘SwarbAid’, benefit for Dave Swarbrick at Birmingham Symphony Hall with Fairport 1999. He was highly entertaining. Heavy Horses, Songs from the Wood and Stormwatch are recommended if you are not averse to Folk Rock.

When my wife and I amalgamated our record collections nearly 40 years ago I brought Prog Rock to the table, and she brought folk rock and Jethro Tull.

She still hates Prog, but I quite like Tull!

Got most of their albums. We’ve seen them half a dozen times over the years.

I have every album until the last couple , some more than once with remasters etc. Saw them live twice too. The first band I was really a ‘fan’ of rather than just liked.

I listen rarely now and for me only some of the first few albums Stand Up (pun intended) that well and I think after Stormwatch it can get a bit embarrassing at times, not least because IA’s voice was shot. Some of his lyrical preoccupations got a bit creepy too. How Crest of a Knave won a Grammy is one of life’s great mysteries…

There’s fun to be had though, and their catalogue remains pretty unique. Check the Steve Wilson Remasters if you can, they are mostly good, or very good (Benefit is a revelation).

Fair summary. I’ve moaned on this forum before about how Ian ditched the classic seventies lineup in favour of a synthy sound and disposable PPE. 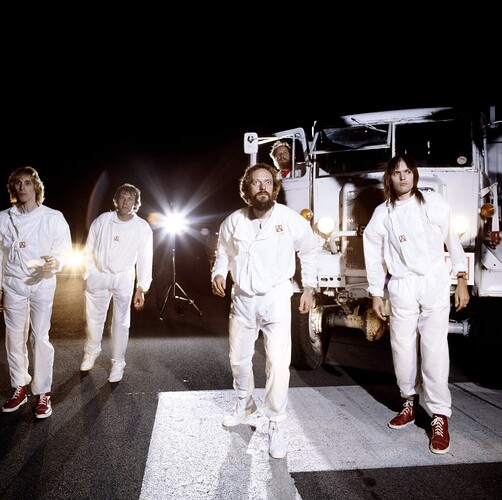 Downhill all the way from there IMHO

To be fair he has gone through more band members than most people have socks. Not an easy man to work with I suspect.

I always thought Ian Anderson looked comical - unintentionally so - standing one-legged while singing and playing a flute or whatever, a bit like a hippy version of Long John Silver.

But take away these mental images, and the sound was unmistakable, and rather splendid. I must look into buying ‘Aqualung’ and ‘Thick As A Brick’, neither of which I’ve listened to for forty odd years now.

Not to forget TAAB2,it’s on a par with TAAB1, so if you’ve enjoyed the first…

That is a new one on me entirely, Lorro. Is it a much more recent offering?

Please don’t spring anything too radical onto me.

I like JT historically but like a lot of classic rock I grew bored with it. I recently picked up Aqualong and Stand Up in Hi Res from Qobuz and get a lot of enjoyment out of them. The SQ is very good compared to the old remasters I have.

Hi,it was released 2012,I bought the cd then,and have since bought the box set on vinyl which includes a fantastic hardback book. 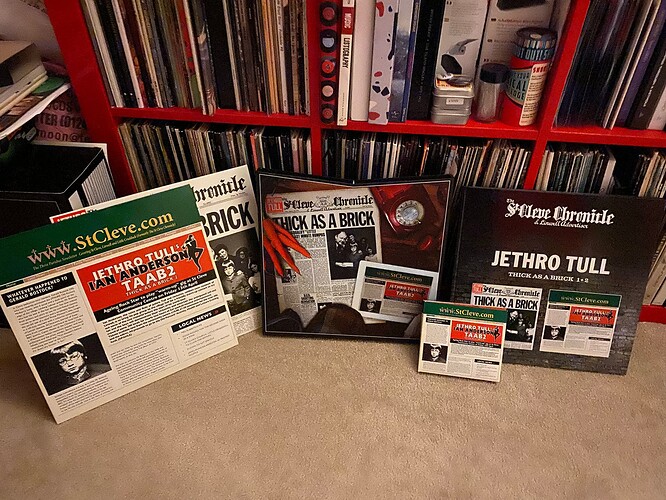 As you can see the box also included TAAB ,which I already had,but it was too nice a package to pass on.

Thanks again. I had a look just now on Amazon (UK) for the 2LP set - the old and the new one - and, almost inevitably, it’s out of stock. I’ve registered to be notified if and when it becomes available to buy again.

There appears to be two copies on the bay,one sealed,one used,but have been reading some articles that say Tull box sets may get re-issued ?

Thick as a brick is one of my all time favourite albums, and another that I guess never goes more than a year between plays!

I wasn’t an avid JT fan, buying everything, but my collection actually contains more than I realised, the other albums being Aqualung, Living in the past, Passion play, Heavy horses and Too old to rock ‘n’ roll, ‘War child*, A, Broadsword and the beast, Catfish rising, Benefit. Other than TaaB I can’t remember when I last played these, and some I played very few times, so this thread is a reminder to do so, though it’ll take several sessions as I have more of their albums than I at first recalled!

I saw JT about 5 years ago, on their Thick as a brick 2 tour, the first half playing the original and the second half the new work. Ian Anderson’s voice was shot, and someone else sang the main vocals - but his voice was spot on. IA hadn’t lost his uncanny ability to stand on one leg while playing the flute!

I have a feeling you’re going to work through my record collection, artist by artist!

Thick as a brick is my favorite, but I’ve always loved the much (unfairly) reviled Passion play

Personally I think Crest of a Knave is a fantastic album. Whether it was worthy of a Grammy is another matter, but then I’ve rarely enjoyed any film that won the big Oscar

JT is a fine band, even today’s lineup of Ian Anderson and friends is pretty good - check out this year’s Zealot Gene.
The Steven Wilson remixes are really worth getting hold of - though I know Aqualung, TAAB and Minstrel go for daft money on that well known/reviled online auction site.
Steven Wilson remix of Broadsword has been delayed until next year but is hotly anticipated by many.
Avoiding the obvious, try and get hold of the SW remix of Heavy Horses - Moths might just be Ian Anderson’s finest moment.

The first album I ever bought was Tull’s Benefit (in my school lunch break for ten shillings).

I’ve been listening to them ever since and have seen them live about six times IIRC. A distinctly patchy output, some brilliant, some awful and a lot between, particularly from the mid 80s onwards but an awful lot of good stuff up to then, and some since. As to what is good and what is not, that’s a purely personal thing.

There’s a quirkiness and humour that was all too absent from many Prog outfits, who had a tendency to take themselves a bit seriously - not that I don’t love much of the material they seriously produced. Tull’s music is often more complex than it superficially appears and IMO Martin Barre is woefully underrated.

The Steve Wilson remixes are particularly good. I recommend them highly.