I swapped my phono stage last weekend for the next model up without any consideration for things like physical size! Long and the short of it is that I have had to buy two sets of medium legs to replace the standard height ones.

As this will involve quite a bit of weight lifting and general cable faff, I thought (for once), it might be a good idea to check if the use of each level stands up to scrutiny from forum members with better electronic knowledge than mine (non-existent)!

Hopefully I have managed to insert below a diagram of the two stacks showing how it is currently arranged. The simplest option is merely to swap out the legs on the levels containing phono stage and its power supply unit. The top of the two stacks would retain their current relative relationship ie one standard level higher on the left.

An alternative might be to move the tall legs currently spanning over the power amp on the left and move to the bottom of the right stack to locate the phono power supply (it’s a Tom Evans unit and may give out electrical ‘stuff’); medium legs to replace the tall ones over the 500 amp. This would retain the height of the left stack and maintain a gap between top of cd player and underside of a shelf edge. The other rationale for considering this would be to have a 555PS directly below the radikal power supply for the record player rather than the Tom Evans power supply. I have no idea if either is preferable/ if the radikal is sensitive to different power supplies.

There is an aesthetic aspect to the question as the phono power supply currently sits on the level adjacent to the pre-amp and introducing medium legs to the current arrangement would create non-aligned shelves from the phono stage up! 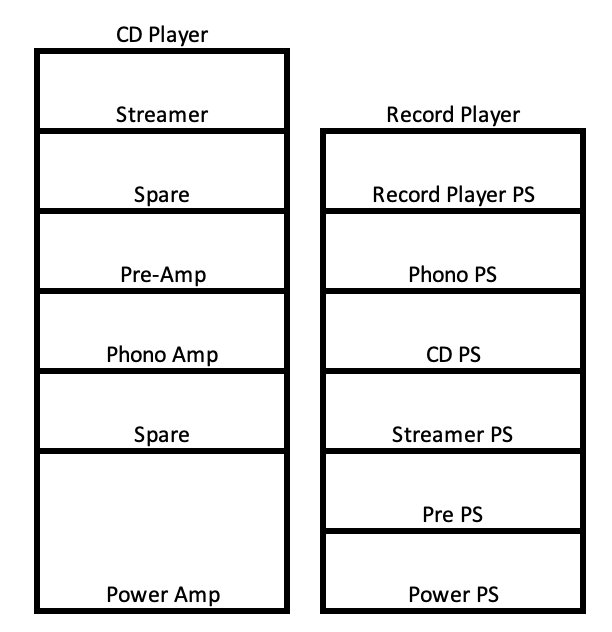 All reasonable suggestions considered (other than creating a third stack which is not an option!).

I’d move the pre amp up and the power ps in the adjacent stack too, as long as it’s lower than the pre. This should get the Burndys off the floor.

I abandoned CD when I got the ND555 as I found the ND was compromised by not being system earth. I didn’t have a CD555 to compare though, just a CDX2. Maybe you’re happy to have the streamer playing second fiddle. If I want to spin a disc I use a DVD5 connected by SPDif to the streamer but I hardly ever do.

Naim give a lower maximum shelf limit when there’s a set of tall legs involved but I’ve never put this to the test.