Hi ,
I am seeking to upgrade my system with a Fraim set, my concern is the top shelve as it is require to take a phono turntable size 44x39 cm). in consequence the factory glass sub-shelves are short in size
Did anyone facing the same problem experiment a solution like a extended sub-shelve ?
Will it jeopardize the balance of the entire fraim?
Best Pat

Have you checked that the feet won’t fit, as presumably they are not right on the corners? If they won’t fit, you could get a larger piece of glass cut for the top shelf. You would not be able to use the little bar that stops the glass sliding off the back so you’d need to be careful. Alternatively, a wall shelf might be a solution. A lot might depend on what the turntable is, as some are better on shelves than others.

Unfortunately, the mentioned dimensions are measured at the feet’s level.
Do you suggest that an extended glass shelve would create instability?

A wall shelve is not possible.

I have my P10 on the top shelf of my Fraim and use the locator rings to keep it in place and even though the P10 is very light its solid as a rock. You may find actually yours it fits OK as presumably the feet arnt right on the edge of the TT base. The glass shelf is 45x34cm so OK in one dimension, if the TT feet are at least 25mm in from the edge of the TT in the other dimension it should fit OK without new glass…

I really don’t know. The only issue is that if you align the glass with the front of the shelf it will not be centred on the steel balls from front to back. On the other hand, if you centre the glass on the balls it will then hang over the front and look horrible.

nfortunately, the mentioned dimensions are measured at the feet’s level.
Do you suggest that an extended glass shelve would create instability?

Ah so. You wouldn’t be able to use the locator bar at the rear as HH says above but you could use three locator rings instead of the normal two for the support bearings…

I used a Fraim Lite shelf for the turntable and as the TT’s feet are hard cones I put some Fraim chips between them and the shelf. They would actually fit on Fraim glass but I wouldn’t be able to use the dust cover. I’ve now swapped the lite out for a spare full Fraim shelf but inverted and still without the glass. 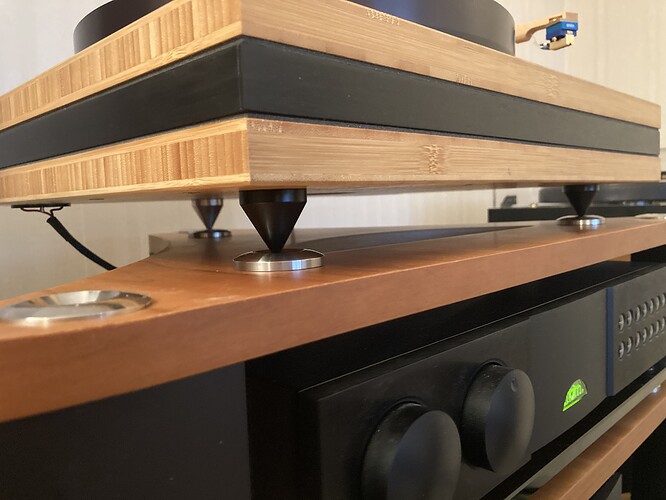 Nice picture! This option will not match with my TT.
In your configuration, how does the fraim compare with other shelves? Where did you get the most of improvement from?

Does any weight limit apply for the top shelve? My TT is close to 20kg.

I have 26 kg’s of dcs rossini on my top shelf, and its fine, so you should be fine

I used Fraim Lite under my Townshend before getting the Artemis, prior to Fraim I had an Origin live Basic. The Fraim, lite at the time, made such an improvement to the whole system that I can’t say what its effect on the turntable was alone. I’ve never tried a wall shelf as neither deck has had a problem with Fraim. I had a Well Tempered Versalex on loan before buying the Artemis and that just about fitted on the Fraim lite shelf but the deck overhung at the front a bit. If I’d bought it I’d have tried replacing the Naim wood with something a little larger, possibly from plywood of similar thickness but deeper at the back. A Fraim shelf will give the locations of the holes for the legs.
My dealer at the time (Simon Walker, then of Audio T Reading) Used a wall shelf under his Versalex but I don’t know which, he was a Linn man for decades so it would have been something bought for that.
A linn on Fraim in my place would have been problematic because of footfall making it skip, a Manticore was, but the solid decks had no problem with that nor feedback when a foot and a half to the side of an NBL.