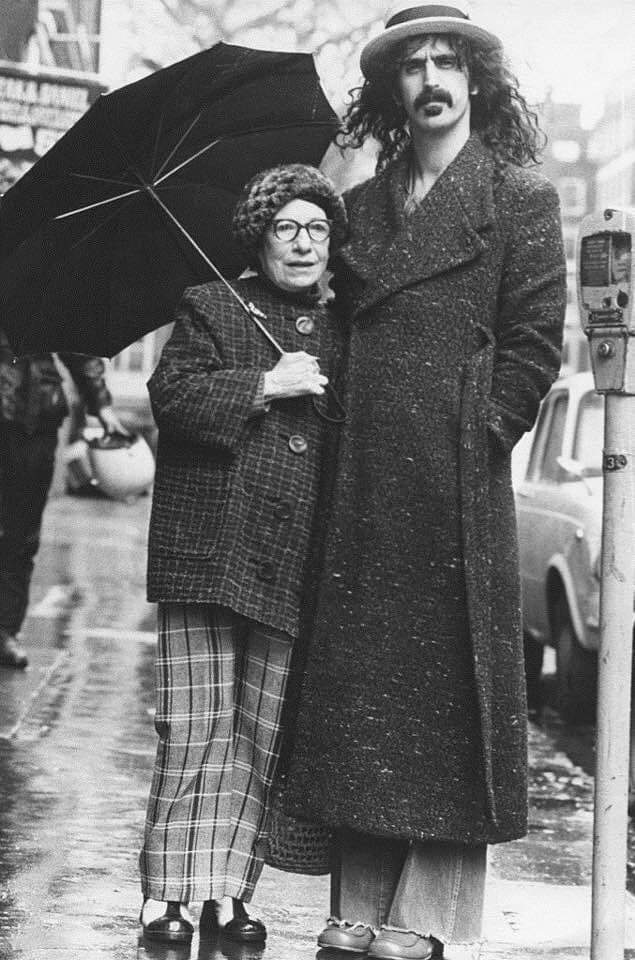 Frank Zappa with his mother.

A lovely picture of one of our RIP Music-geniuses.
I have many lovely music-memories with this genius.
But unfortunately,.I have not listened to him for the last 20 years…At least.

Why not? I listen to Frank or to one of the many tributes/interpretations at least once a week

His music is as relevant as ever.

You can start with this …

Clip taken from “You Can’t Do That on Stage Anymore, Vol. 2”

Over the decades I’ve admired his independence of mind, and wanted to like his music (if not his choice of names for his children!), but when I have tried sampling I have not liked. Overall too jazzy for me (I don’t like jazz).

There are a few things I have liked, one being Willie the Pimp (in fact I have a copy of Hot Rats, originally bought back around 1970/71, since ripped).

If anyone can suggest something from his extensive discography that is least jazzy I’d quite like to hear hear.

Great pic, I hadn’t listened to Frank for a while, not twenty years more like a few months. So after your post played a few from my youth, Hot Rats, Apostrophe, Zoot Allures and Joes Garage, made me smile and as always admire his guitar craft and arrangements, gifted musician.

I found it hard to place FZ musical style, so when you said Jazz I started thinking about FZ music again. Same things I struggle with Jazz are evident in FZ arrangements and production. I think you nailed it, thanks!

However, at times little FZ is required, if nothing to make you smile and reset. I keep it simple, hour with his compilation album ‘Strictly Commercial’ will be enough for me for next 6 months.

Don’t Eat the Yellow Snow continues to make me smile every time I hear it.

I have Hot Rats on CD and i like it…

Difficult, as just about all of Frank’s extensive body of work is shot through with his influences- Jazz, Modernist European classical, doo wop. You’ve already got Hot Rats, probably his most mainstream ‘rock’ offering. Depends what aspect of Frank most floats your boat. You could try something like Joe’s Garage Vols 1,2 & 3. All pretty much straight ahead and where you will find one of his most exquisite compositions, Watermelon In Easter Hay, or Sheik Yerbouti, featuring a young and pre- King Crimson Adrian Belew. But beware, you will also find there much of Frank’s scatalogical humour which, in my opinion, hasn’t so much as dated badly as being off-puttingly puerile in the first place (but then that was the whole point). His prodigious output is a bit of a rabbit hole that’s rather delightful to fall down- one of my own favourites is Chunga’s Revenge- but be aware of his dizzying turn of pace from mainstream rock to left-field jazz to avant garde classical, often over the course of one song.