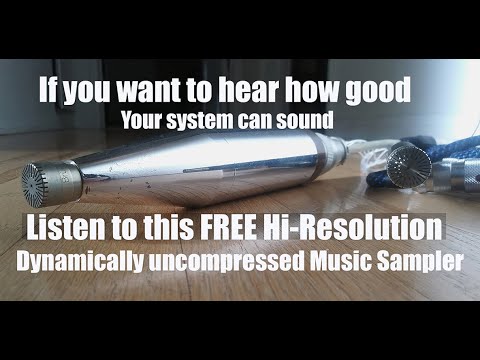 Anyone listened to these? Still downloading to listen later. Only near my Muso2 at the mo, but should be interesting

I found a few free HiRes downloads, and I must admit, that for my ears anyway I couldn’t hear a great difference. I haven’t done a side my side test with identical tracks of different qualities. I realise I could sign up to Qobuz for a free month trial, but the danger is that if I do a comparison, and I really like the improvement, then not only have I tied myself into a lifetime of subscriptions, but I may start to be disappointed with my older CD’s which would be a real shame.

I’ve downloaded the file, its a pity its only 16/44.1, but its all about the recording technique. The included .pdf says all tracks are recorded with two omni-directional microphones, except for track 3 which was a live recording .

It’s not that I won’t be able to tell the side by side differences, it’s more I want to stay happy in ignorance - at least for the time being

. Perhaps a lottery win would change that.

You can also download a bunch of tracks in different format (same track at different resolutions) from Blue Coast Records (bluecoastmusic.com) - the test tracks are free downloads.

OK I’ll have another look, obviously picked the wrong file.
I can’t post a link to what I got as I’m out for an hour or so, but it’s a various artists compilation in 16/44 WAV
I’m very familiar with Blue Coast, I was inquisitive about MA Records, they’re new to me, thats why I downloaded that file.

If I post a link I remove the http & separate the joined up line, leaving you guys to “join the dots”

If it’s uncompressed 16/44.1 PCM recordings you want, why not try most classical recordings on Red Book CD from the last thirty years or so?

If you want something more definitive , all Telarc recordings (IME) specifically state: ‘During the recording of the digital masters and the subsequent transfer to disc, the… signal was not passed through any processing device (i.e. compression, limiting or equalisation) at any step during production.’ 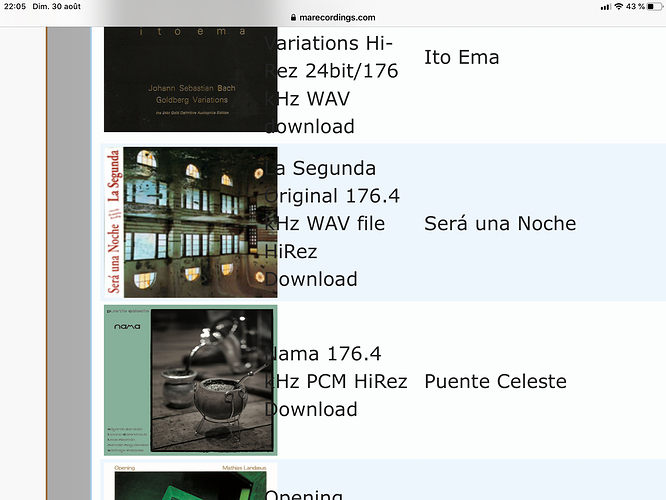 but it would sound horrendous on a hifi reproduction system,

I’m unclear why you feel that compression is necessary to sound good? Most live acoustic music has a dynamic range well under the range achievable by a decent system, and would only be a problem if the music has an extreme dynamic range such that setting a level for the quietest passages to be audible above room background would make the loudest peaks unrealistically high.

My system used to be particularly good with chambre music, but good large scale orchestral recordings clearly showed its dynamic limitations; after adding the 555DR and 300DR (and better cables) to the 272, those limits are now much less obvious!

The advantage of using acoustic material is that the brain has a set of references as to how natural sounds should be (used to aid survival by causing alarm in response to ‘unnatural’ or unusual sounds such as rock falls). Electronic music can’t exploit this function of the brain. Yes I’ll fully accept that human memory for sound is deeply flawed, this survival response isn’t particularly strong in humans and that in the modern world we have largely learnt to ignore it; but it still classifies much of electronic music as ‘unnatural’ in nature, where as it classifies many acoustic instruments as ‘natural’ - you just have to choose to pay attention to the feelings that the reptilian brain is sending up the line.

Ask a recording engineer. I

The thing is, with few exceptions they are mixing for play by people very much including those with systems that are far from true high fidelity, systems that are incapable of reproducing full range (amplitude and frequency). In such systems unless compression is used the music indeed will be unlistenable. That is quite different from a high quality system played in a suitable room (including without excessive background noise), when natural full acoustic range would work, with the exception of extreme dynamic range music: Tchaikovsky’s 1812 being one example, where the Telarc 24 bit recording has to be played with the orchestra unnaturally quiet to avoid the canons blowing the speakers (unless you have speakers capable of perhaps 120dB or more at the listening position - and are prepared for the ear assault!)

I downloaded those tracks and had a listen. Sounds good but I think that the church style reverb is what makes it sound so good. A well recorded red book CD sounds just as good to me. I Like cowboy junkies trinity sessions! Could easily pass for hi Rez if you didn’t know.

Interesting comments from all, undecided myself

I downloaded this earlier and am now plying it via a MacBook Pro (through the asynchronous USB on the Oppo). SQ is nice, sure, but the music is actually pretty good. Normally these “audiophile” compilations are soft jazz hell or acoustic dreck. This is actually a pretty eclectic and interesting selection.

It’s a nice mix of music and very well recorded. Interesting comparing the Bach cello prelude against my Resonus label David Watkins CD. Different but both very good. Some wonderful low notes on the Hi-Rez recording. Can I tell it is Hi-Res compared to the CD though? - I’d be hard pushed to say. The differences in the general acoustics and the two player’s interpretations are far more pronounced and relegate any discussion about bits and sampling rates to inconsequential as far as listening preferences are concerned.