Friendships and the end of it

One of these days I have to visit a wedding of who once was my best friend. We shared primary school and what followed until we were teenagers. He studied, I dropped out (stupid schools, even more stupid teachers) but was hired by an american software company and I had a good job, life, wife etc … ever since.

For him the trouble started. He got jobs he was good in, but he was unhappy. He was an attractive guy but got the wrong women. Ultimately he ended up in psychiatry as a patient. Now in his fourties, he is doing well.

I have always been honest with him, and I often was the first one to mention that a certain female being was not the right one. This more or less resulted in that we grew apart. Well, thats my reading of it at least. I’m obviously wrong, but I see that the ones not being open about their opinion and were friends only for fun only (as I see it) are still there whilst I am on some distance. I’ll meet his bride on the wedding for the first time. Apparently is the risk of my behaviour / directness / openness mitigated by this.

For me it is a most important aspect of friendships to be able to give an opinion, even if this is sheer criticism on someones decisions in life. In my opinion friendship is a subcategory of Love and high above everything else.

I have stopped to invest time in this friend and see it ending however acts of live could interfer.

An Ardbeg who feels pain.

That’s much more complicated than speaker choice, room correction and psycho-acoustics combined…Your dilemma is not uncommon and I’m not sure there is guaranteed recipe to remedy the situation. Good luck.

By accepting what you said:

In my opinion friendship is a subcategory of Love and high above everything else.

I think it was Shakespeare who said something along his the lines of, if you have one real true friend in life you have done well.

My partner, who has many friends - some the same throughout most of her life. Has said the best advice she had been given, was that friends need to be put in boxes. In that some friends will mix well in ones own company, others won’t and some will only prefer a one to one.
Also worth being aware of what box oneself has been put in by others.

Thats a good one, I never thought about it that way. Say thanks to her please.

For new friendships being part of a group is no problem but once you share so many things, it hurts to step back in the group though.

Time will tell where this all ends but I never thought that since this started about ten years ago it still would be a thing.

One good thing, it makes that I cherish my existing friendships more.

Very few relationships last for ever, be it a friend or a lover, the ones that do though are to be treasured. 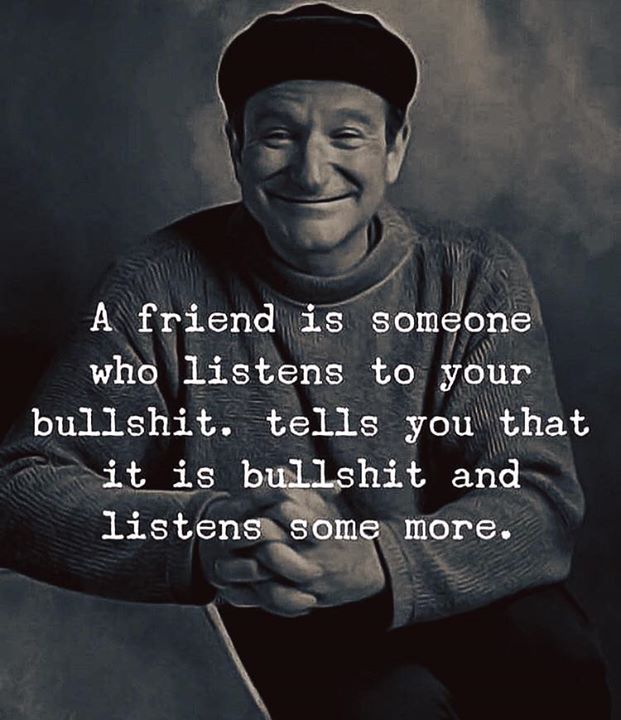 I’ve fallen out with a few long-standing friends from primary school into 50s because I wouldn’t cover for them when they were cheating on there wife’s.
I hated being put in that position because they were lovely women and great mothers.
I said I’m not doing it sort your life’s out.
That was the end of some good friendships.
My best two friends have both passed away in the last three years.
Within 18 months of each other due to Cancer.

Losing your two best friends…that is very tough. Sorry to hear that.

Your friend has selected you as a witness to a ceremony which acknowledges a major reordering of his familial and emotional priorities. You can acknowledge and attend, thanking the bride and groom for thinking to invite you or you can stay home. No one has invited you to opine on the qualities of the new life partner.

An Ardbeg who feels pain.

I think it’s fair to assume you are this person’s male friend and not another lady who might be interested! (Naturally a man might find his male friend attractive and be protective too!).

Once that’s established being brutally honest, I think any lady he hooks up with is probably providing emotional and physical things he cherishes, many of which you won’t be able to provide - constant support if needed and honesty when it’s asked for are the best you can offer and all anyone could ask for of you. He will be closer emotionally/physically to his partner than you and unless there are clear infidelities or other factors your conscience feels you have to tell him about, simply thinking she’s ‘not right for him’ is not really your call, or at least not likely to be welcome.

You have a choice - go or don’t go, but if you do beware 1st impressions of the new wife as much as they may be correct, you may find she’d be completetly different socially than on ‘her day’.

I hope that doesn’t sound unsympathetic - I’ve had a similar experience nearly twelve months ago I may elaborate on later, and I feel somewhat angry that I may have been ostracised from a group of old friends by the actions of one quite dominant individual - that individual had been a close friend for over 40 years, but was one of those people who had to be center of attention, was a bit of a joker and generally used put downs to get laughs and play to ‘the court’.

I mention this as I wonder if it’s less the friend than the ‘friends for fun’ who will also be there that might be making you uneasy.

I’d also add that for decades I always attended events/went to get togethers as I felt I ought to and it was the right thing to do, or occasionally a responsibility to be seen - I’m far more selective now and actually saying no/not going can sometimes be quite cathartic.

I know I upset my snooty cousin by not going to her son’s ‘posh’ wedding last year - I wasn’t initially invited, my parents were, but the old bat must have known they couldn’t possibly have attended the prestigious venue as they were housebound. When I informed her of this she said she’d see if she could persuade her son to invite us as it was a ‘no children’ event and he might make an exception - we were invited but there was ‘no room at the inn’ where the reception was held and other accomodation many miles away so I declined. To be honest, my mother died a few months before the wedding, dad was declining, and I just needed time with my immediate family and am glad I didn’t go, as much as I’d have enjoyed having a few drinks with her son.

Sorry can’t edit to add the link to the earlier post, it’s hardly organ music, just some pop from quite a fun uplifting album which also has some excellent slower numbers:

I’ve fallen out with a few long-standing friends from primary school into 50s because I wouldn’t cover for them when they were cheating on there wife’s.
I hated being put in that position because they were lovely women and great mothers.
I said I’m not doing it sort your life’s out.
That was the end of some good friendships.

Good for you - their loss and they’ll know that. Keeping true to one’s principles isn’t always easy or the simplest route.

My best two friends have both passed away in the last three years.
Within 18 months of each other due to Cancer.

One of my best college friends died of cancer on my birthday in his early 30’s, not sure if it was the same for you but it was a real emotional rollercoaster for quite some time before this, not just after the event.

I think it was the first time I questioned my own mortality.

Problem with friends is when you were young you wanted to be everyone’s friend. As you get older you release you just don’t have the time, there’s work, the house and family tends to take most of your time.

I think if you have 2-4 close friends as you age (excluding your partner) you’re pretty lucky.

For me it is a most important aspect of friendships to be able to give an opinion, even if this is sheer criticism on someones decisions in life.

It’s a wedding. Opinions that are anything other than gushing praise of the bride are out of order so if you really must ‘give an opinion’ you really ought to save it for another day. But surely anyone would know that.

I think if you have 2-4 close friends as you age (excluding from partner) you’re pretty lucky.

We lost almost all of our friends after our daughter was born, so that sorted out the true ones.

Mike,
Sorry to here that,
Im guessing your daughter has a few problems that people can’t cope with.
I hate that.

I had an quaintness who hasn’t been in contact with us for over 6 years. He’s had some major health problems recently and now rings me regularly and after each time I get sent a link to his “go fund me” page. Which I find rather offensive. He has always worked, never saved and has never been married but lived a selfish life and now unfortunately karma has caught up with him.