Curious in hearing what you went to from having a Powerline in your system and what benefits it brought with it. Thanks!

Hard to imagine anything improving on a Powerline which I have been most impressed with. But, then again, I’ve never tried any super expensive high end mains cables. I too will be most interested to hear about your findings.

Here is a copy of my post from another thread …

Sometimes I think: is it imagination, because it should be an improvement, or is it really such a clear difference?

Did the Powerline on the Nova and I am fascinated.

Tonally everything is very much the same. The separation of voices and instruments has become much clearer and has more space and stage, which makes it more natural and bigger for me.

I’m listening to an old LP by Van Morrison right now, Avalon Sunset. I’ve never experienced the record like this before, perfect.

Have the Powerline connected directly to the wall and not to the power strip HMS Energia MKII Basic, as before the Audioquest Z3. But I will try that later.

Ansuz Mainz cables to my ears sound significantly better. Starting with X2 for about the same price.

I found a cheap 1m CAT 5A cable which cost £1 the other day and just opened it to connect am old AppleTV 3 streamer in the bedroom to an ethernet socket on an old Apple router I used to extend wifi recently.

No relevance to power cables of course, but for had a minute I was tempted to try it instead of the ‘hi-fi’ ethernet cable connecting my Nova to the LAN. Suffice to say I chickened out!

I only have 2 Powerlines but have tried various ‘mains cables’ with various ‘mains conditioners’ and have ultimately been underwhelmed - I’m sure there are more synergistic options out there but I really think with mains cables you have to home demo. The other issue is that there are so many permutations - which components first if changing?

Did the same thing when I had a SuperUniti - possibly the best, if almost only, upgrade for the SU and now, apparently, the Nova too.

I’ve had such great results with the Audioquest Thunder from wall to DC Blocker that I’m planning to challenge the Powerline’s to my 555PSDR and 300DR with the same. 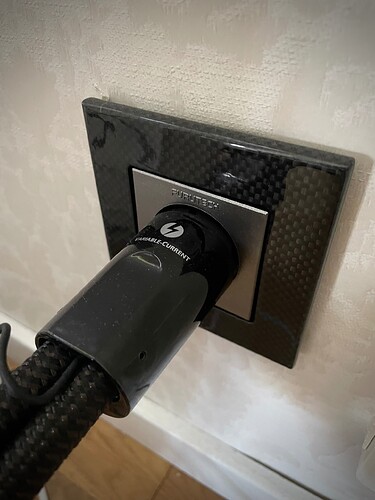 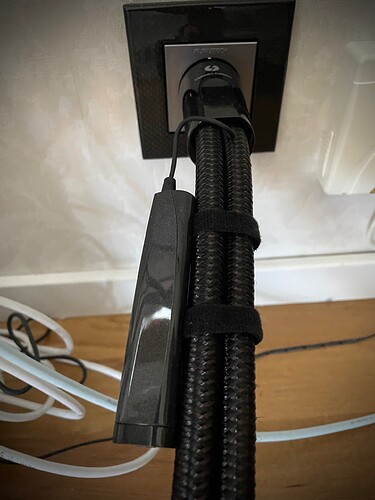 Related to Powerline and vibration which they put great efforts in solving with their own designed IEC, Audioquest claims this in their “power demystified white papers”

Again, everything in high-resolution audio counts. Everything makes a difference. However, a common problem in the audiophile com- munity is placing the greatest share of attention or care to an area that is responsible for contributing a mere 0.001% to any sonic con- sequences.

Obviously, we know that resonance within critical audio circuits is an important topic, and this is a known science. The lower the signal lev- el is, the greater the chance of distorting the audio content. If we ex- amine a low-output moving-coil phono cartridge, for example, we are already starting with a signal that is at least 60 to 80 decibels below the output of the power amplifier. Subtract from that a potential 70 to 80 decibel dynamic range, and the circuit will need to be stable and unconditionally quiet down to a fraction of a microvolt. Sadly, that’s not always possible. So, anything we can do to lower electrical noise, including the effects of mechanical noise and vibration, will help.

However, AC power is already at a decibel level decades higher than most audio signals. Further, we are not trying to faithfully reproduce low-level signals below the AC power’s sine wave. (That would be noise and we’re trying to eliminate that.) Yes, AC power has vibration you can actually feel since it’s an alternating 50- to 60-cycle wave- form with considerable current to feed power amplifiers. However, the alternating current is immediately converted to vibration-free DC (direct current) in the system components’ power supply.

It’s not that a well-designed platform for a power component isn’t a worthwhile investment, but a power device whose design budget has been entirely or mostly invested into the proposition that vibration is the most significant issue facing power is simply misguided. If an AC cord of 10 meters length were cemented into a ton of bedrock, it could be easily measured that 99.999% of the noise that was present at the input would still be present at the output (in addition to the RF noise induced along the way)*.*