I had not heard about this activity, which is now illegal, although I admit that I have been tempted to raid my own woods in the past. I have friends who own part of Cranham Woods (near Birdlip in Gloucestershire) who would be dismayed to see it happen again.

As an aside, when I was planting some trees last week I was pleased to see that the clay / soil structure had improved since I had first planted trees in 2013.

Different generation, different culture perhaps. There didn’t seem to be anything covert about it, but I was perhaps 8, 9 years old. I certainly wouldn’t do it now, the possibility of transferring diseased material would make it a no go. The friends my grandparents had seemed to live a life where they knew someone, somewhere, who had access to “essentials”, the man who made Cotswold stone tiles, the farmer who had a stream with watercress. They would drive beehives to Exmoor for the summer and bring them home again in autumn.

Indeed different times.
Reminds me of a field at France Lynch on the way to a nature reserve that has a stream flowing from a garden with watercress growing.

The ending of peat as compost is something I cannot argue against. The question of whether you buy some that has already found it’s way to the garden centre, that has to be your decision.
I agree about doubts with peat free bags, most that I bought last year seems to be part broken down coir, with mould.

I may buy some just to see what I might have been missing (or will miss) as I’ve generally purchased peat free for quite some time.

Was it yourself who mentioned a composting thread the other day? Could be interesting, I may be too selective, and I’m sure I ‘don’t do it proper’.

Good questions.
I try to use my own compost, and mix it 1:1:1 with soil and vermiculite.
As my garden has very thin soil I also use spent mushroom compost as a top dressing over winter on my raised beds.
… I suspect the compost was domestic, probably municipal. I don’t trust municipal compost, unless it’s organic, because although it’s usually made to a British Standard you don’t know it’s constituents.

Until I saw an article today I had no idea what ‘no green waste’ meant, still not sure I do.

When you see things like this I obviously don’t undertsand how stupid many people must be: 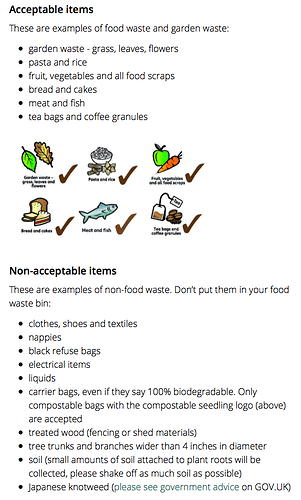 Amazing many councils include teabags when most contain plastic.

I asked a question Hot Composting
@Camphuw wrote an epic reply that I have tried to follow in practice. It appears to be working.

In the 1960s when we practised composting it was customary not to include potato peal, orange peal, and mushrooms… after all these years this has stuck, and i’m not sure if it really applies.

Can only think to avoid causing the next potato blight, or other fungal diseases…?

I do have a compost bin but the compost never seems to rot down to the sort of crumbly, weed-free texture you see on gardening programmes. I dig it into the veg patch.
Also, I have yet to find a peat free compost which is comparable to peat compost; mostly it is terrible fibrous stuff with little substance and a magnet for birds making nests. I usually buy the version with added John Innes which has a little more substance.

Although my gardening activities are somewhat restricted now I still use lots of pots to provide colour and provoke my interest. I have been using Melcourt (link not pos.) line of peat free composts this year.
Looks and feels fine but not convinced the plants are doing quite so well. Perhaps the cold weather is at fault.

Neighbours’ bird feeder scatterings were the reason I stopped my low level composting. The bin was a nice cosy warm home for a family of rats whilst awaiting the next serving of grain rich lard that would be thrown over their grass.
N 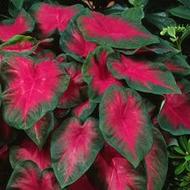 I have just had a poke about in three pots of caladium corms that should have been by now shooting.
All three infested with small white worms and rotting.
Un sterilised compost, bugs dormant on the corms,poor gardening.
Take your pick.
Need a quick container rethink.
N

Composting has been a journey for me, as I’ve mentioned before. I’ve used Daleks for 15 years and am frustrated at how long they take to break down organic material, largely I’m too lazy to turn / mix the waste regularly. Subsequently, I started using the Bokashi system, a fermentation process, for my kitchen scraps Bokashi Composting - A Complete Guide | Lean Green Home.
I started this in an attempt to speed up my composting. I had the fermented product to rotary bins that take waste from my hens. From the rotary bins the compost goes into Daleks to mature.
Bokashi process: three weeks,
Rotary bins: four months,
Daleks: six - eight months.
Result = garden ready compost.
Caveats, 1. those compost ready bags don’t break down during this time, and 2 it helps if you like the smell of fermenting waste (think silage).

I’m using Melcourt Sylvagrow peat free with added John Innes. (Melcourt make several products, including some for professional growers.) I think this is the best peat free I’ve used so far. They are making a full range of John Innes also peat free. These mixtures will need feeding after 4 weeks or so. Ive had excellent results with Crown Imperials, but some disappointing results with lilies. As you say, rotten weather too.

We were issued with a free composting bin here and Mrs Bruss (the gardener) has dutifully been using it. A couple of weeks ago she asked whether the settling should be happening so quickly as a few days after filling it it was halfway down again. On investigation it turns out that something has been burrowing under the bottomless container and there is a large void. The only animal I can identify as possible culprit is the badger(s) that wander in at night. I suspect the wormery attracts them. I can’t think of anything large enough to dig such a large space so quickly.

Rats like compost bins and its easy for them to dig under one, but this seems like something much bigger. We eventually placed the bin on some paving slabs much to the annoyance of the cats who loved sunbathing on top whilst partaking a little of ‘La Chasse’ if they bothered to wake up.

Fortunately no signs of rats. The owls, buzzards, kites and eagles keep them down when the dogs don’t.

We do have a badger or two that come in at night, one from the field opposite and one from the field at the bottom of our garden/field.
We also have other visitors but nothing that digs the way that larger animals do. The badger scrapes also look similar to the digging signs around the composter. The only other thing I could think of was foxes, but again they are rare around here.

Given that a few tomato plants I’d bought a few weeks ago didn;t seem to be doing much (plus one that blew away completely during high winds) I bought a few others in Waitrose yesterday - darned expensive but decided to try a few ‘grafted’ plants.

Anyone tried these? Frankenstein tomatoes or a good option? Not grown any for a few years due to issues with blight. Supposedly better protected from soil-borne diseases/pests and grow more vigorously. Grapes come to mind.

Built the sump for my diy water feature, I looked today to find that it is now occupied by a dozen or so black beetles.

I have offered the new occupants a temporary ladder to aid their escape.

The grafted tomato plants will usually give a bigger, earlier crop. That’s about it. Tonight I had a heritage brandywine tomato and as usual, it was the best tasting tomato for me. As far as blight is concerned, I wouldn’t bother trying to grow tomatoes outside anymore, it’s a losing battle. Blight will no doubt get to them and the whole year’s effort will go down the drain. They only need a little bit of cover to keep the rain off them though.

BTW a substitute for peat is Melcourt Growbark. It’s acidic and contains no nutrients. It’s more free-draining and holds its structure longer. It tends to have too much drainage, so you can’t use it alone though.

IMO they should put a very high tax on peat, so it’s still available, but will put most people off buying it unless absolutely necessary. I have read that the biggest users of peat use it for fuel, not horticulture.