Yes, tickets on sale from Friday. I am sure it will sound great for Genesis fans, but a very static Phil Collins is not a lasting memory i want, i will stick with mine from Birmingham NEC 30 or so years ago.

Genesis a announce tour venues for later this year. There would have been a time when I’d do everything I could to get tickets. I saw them 9 times (one without PC). The best was Paignton Festival Hall. They’d just finished a world tour filling huge stadiums and decided to do a small theatre touring the UK. Three rows back from the front and they opened with Back in New York City. Justice was done because I lost out on the Lamb tour when Steve Hackett crushed a wine glass in his hand and needed to recover.

But this time around I’m not sure. Phil’s voice has lost power based on his recent solo performances. There’ll be a sea of iPads getting in the way so I’d like to remember them from memorable performances at Paignnton the NEC as it was back then and Wembly.

Good luck to those fans who do go.

Yes, tickets on sale from Friday. I am sure it will sound great for Genesis fans, but a very static Phil Collins is not a lasting memory i want, i sill stick with mine from Birmingham NEC 30 or so years ago.

I thought more a case of ‘Phil Collins and his support band’. I heard on the radio this am it was going to be the original members and, for a few seconds I thought ‘great, Peter Gabriel’, but no

I went to see The Who about three years ago. I wish I hadn’t because it has made it difficult to listen to them now.

I also saw Jethro Tull about 18 months ago, Ian Anderson’s voice wasn’t good. I hope that was just a problem with the PA or an off day.

I saw Hawkwind with a backing orchestra about a year ago. Dave Brock was fantastic. Almost as good as when I saw them in '78.

Some bands are better in memory. Hard to know in advance which ones though!

Ego, or strapped for cash? Given the choice I’d pick Peter Gabriel every time over these sad has-beens.

Some memories are better left as that, memories.

Also available from Thursday am if you register with livenation.
Ive seen Genesis just once in 2007 at Twickenham and we were 10th ish row back right hand side of the central block- perfect! Saw PG a short time later at the Eden project. For me, I don’t think that can be bettered so I think right now (as others have mentioned above) I’m out.
This was our view with no camera zoom. 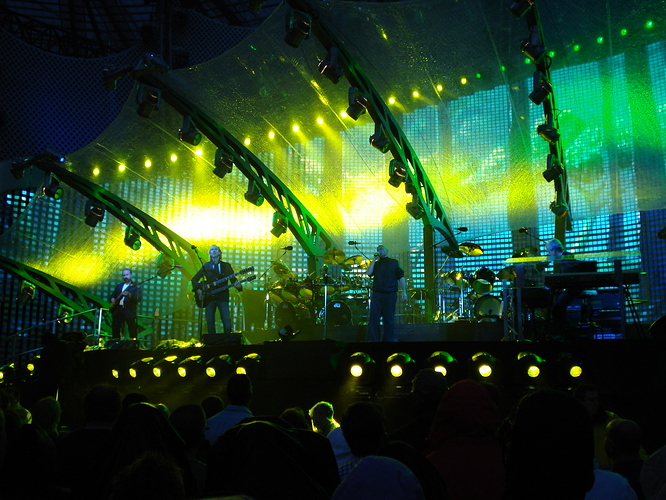 It seems amazing that these concerts can command £400 a seat, to see people way past their prime going through the motions. There are thousands of brilliant artists out there selling tickets for £10 or £15 to see them in small venues, many of whom are scraping a living. Yet millionaires charge £400, a price that few can afford. It just seems wrong. Let’s hope those going have a great time.

Well Southampton Gaumont in 1976 was really something. But there has been a lot of water under the bridge since.

I first saw them twice in 1977 as part of the Wind & Wuthering tour (at the Rainbow and Earls Court). Amazing shows! Listening to Seconds Out brings back fond memories.

A few years later I saw them for the Duke tour (ok) and Abacab (dreadful). Thinking about seeing them now with Phil Collins and walking stick doesn’t really inspire… I’ll be giving these shows a wide berth!

Just heard Genesis described on BBC R4 news as being in ‘their pomp’ during the 80s and 90s. Jeez! Who writes this guff?!

Good grief - I’d heard tickets were at least £150, but £400 is completely outrageous. Unfortunately there will be more than the venues will hold prepared to fork out at these prices. I’ll never forget a neighbour of mine, when we lived in Essex, telling me proudly of the Led Zeppelin reunion tickets he’d acquired - 2 @ £1,500! The filter won’t allow me to repeat here the epithet I mentally applied!

We had one of our WemsFest meetings earlier and were discussing these prices. One of our group saw Genesis in 1967 in London and tickets were 50p. Or ten shillings as it was then.

Ticketmaster appear to have introduced a new ‘system’ whereby ticket prices double or treble after a short time on sale. Supply and demand they might claim…a complete rip off I’d reply. Hence already expensive Genesis tickets at Glasgow this morning went up from £184 (approx) to £400 plus. It seems that in clamping down on the secondary ticket market, the main ticket outlet has found a way of making up the shortfall.

I think you will find that the tix on ticketmaster for 184 sold out this morning in presale. Selling alongside them were tickets with additional fan package for 400 that have not sold out as quickly unsurprisingly. Then you could also get an even more expensive ticket with dinner added in. Tomorrow in the next presale (live nation), I am pretty sure the cheaper tix will be back alongside the added value fan package until they sell out again and then the main sale Friday.

I went to see The Musical Box, French Canadian tribute band, in a compact theatre in Liverpool a couple of weeks ago. First set was from A Trick of the Tail to And Then There Were Three, second set Gabriel era stuff, encore Supper’s Ready. The Collins material was well done, but the 1970 -75 set was off the scale. Price… about £36.
They’re doing The Lamb again next year.

I’ve seen them several times before, as well as ReGenesis and Hackett doing Revisited Tours.
All far better than the real deal when I saw them at Wembley stadium on the Invisible Touch tour.

I’m going to see Pinked Floyd at a church hall in Chester, Saturday night £20. I’ll let you know how it goes.

@DazedDegsy I went to that Musical Box gig at the Grand Central in Liverpool too.

I agree the Peter Gabriel era set was awesome. I’ve seen them a few times before, including Selling England and Lamb shows. I’ll definitely go to see the Lamb show when they tour again.