Just came across Spooky Tooth’s version of I am the Walrus, wow!

Another favorite of mine is the Breeder’s version of “Happiness is a warm gun”.

Both these probably bring a more propulsive / dangerous / edgy feeling than the originals which like all cover versions should do, brings greater appreciation of the nuances to the songs.

What are your favorite cover versions of Beatles songs?

The Smithereens released a couple of albums containing beatles covers. I have B Sides the beatles, excellent album.

Utopia - I Just Want To Touch You.

Andy Ellison of John’s Children (a band in which Mark Bolan played) and later of punk rock band The Radio Stars (There are no Russians in Russia) did a very interesting cover of Help! on his 1968 outing Cornflake Zoo, I have the album, but can’t find a clip.

As you mentioned them, I’d like to say I think Spooky Tooth were a fabulous band and I used to buy all their record when I was knee high to a grasshopper. I was lucky enough to get a copy of their vinyl box set a few years ago. The original version of Spooky Tooth was called the VIPs and had a young keyboard player called Keith Emerson. Later without Nice Keith they became Art and then with the addition of another keyboard man who could sing too, Gary Wright, became Spooky Tooth. Gary and Mike Harrison’s vocals help make Spooky Two one of the very best albums in my collection.

I am the Walrus opens the album The Last Puff (an album without Gary) and is mainly cover versions. If you haven’t already I’d recommend trying some of their self-penned tracks such as Self Seeking Man on You Broke My Heart So I Busted Your Jaw.

Joe Cocker’s With A Little Help is possibly too obvious to mention.
Worth looking out for Easy Star’s All Stars Lonely Hearts Dub Band, a very enjoyable Dub reggae cover album.

OK, so he was an ex-Beetle when he sang this, but I have a soft spot for the singer of this cover…

Dear Prudence - Siouxsie and the Banshees

I’d also add ‘Dear Prudence’ for Siouxsie and the Banshees

Plus, IIRC The Damned did a good version of ‘Help’

Too many to think of really!

Wow is spot on! WoW WoW! 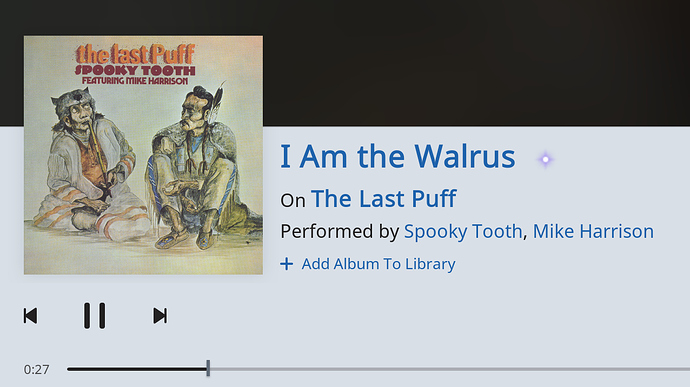 I always think of this as an EW&F song, but of course it’s off Revolver. Prefer the EW&F version.

From the ‘Sgt. Pepper Knew My Father’ NME Compilation LP.

From the ‘Sgt.Pepper Knew My Father’ NME compilation LP.