Greatest Hits or ‘Best Of...’ albums

As I was reading through the WARYLTAWMABI thread it struck me there are quite a few occurrences of the above. Whilst I used to have a few myself years ago when cash was scarecer than it is now, I personally don’t like them that much, preferring to listen to original albums from start to finish (I don’t do playlists either, except for parties).

What are the thoughts of others? In this age of Tidal, Qobuz, Spotify etc. there is little need to buy a ‘Best Of’ as a taster of a band or singer new to you. I still believe that the sort of artists I listen to write and record their music intending it to be listened to as a whole. I accept many of today’s performers produce a motley collection of individual tracks, from which youngsters will download individual favourites.

I’m not saying there’s a right or wrong here, just interested in the views and listening practices of others.

The vast majority of my collection is “full” albums. Where I have a serious interest in an artist, that can run to 10s of albums by them. In these cases I pretty much always listen to the album end to end.
There are some artists where I enjoy some of their music, but not all of it at the same level, so a whole album wouldn’t grab me all the way though. In these cases a greatest hits works for me, I suspect there may be 10 or so like that.

Additionally I have a few GH collections either where I was getting in to someone in the past, or spotted it at a bargain price, once in a while it’s nice to hear all the warhorses together and have a one man singalong (red wine may be involved.)

Best of The Beatles.

Historically the issue with Best Of albums was that they squeezed too many tracks onto an LP and reduced the sound quality. Once CD arrived that should have meant that quality was no longer being impaired, but that come down to the quality of the master they source, and they were frequently less than pristine or reduced dynamics due to the loudness wars IME.

With Qobuz I do find myself shuffling through versions from time to time. I find that frequently I get the best quality from LPs that I have digitally captured.

That would be one huge album!

That’s just what I was thinking.

My thoughts mirror those of @Eoink’s in his post above.However the downside of these releases was having to purchase compilations of favourite artists to acquire the " previously unreleased " or " newly recorded" material that the record companies saw fit to include in these issues.

In general I, too, am not that keen on ‘best of’ type albums, their primary value for me having been where Ihave not lined everything a band has done, but found that the ‘best of’ album contains the things I do like. However one particular ‘best of’ album I do very much like is the Stones’ Through the past, darkly - maybe because it was my I troduction to the band, though I think it is a good collection that hangs together well.

Yes IB, funnily enough two of the small collection of Greatest Hits albums I own are Big Hits (High Tide And Green Grass) and Through The Past Darkly. Both excellent albums that, as you say, hang together well.

I only have a few GH albums, bought just to sample work and as a stepping stone to explore further. First best of album bought, The Beatles 20 Greatest Hits - this soon led buying all their back catalogue as I could afford it. Never listened to the GH once I had the individual LPs. Anyone remember this 80s album… 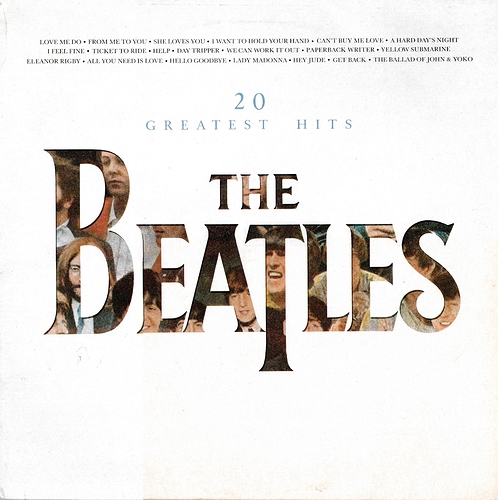 One greatest hits album I thought worked quite well (as a whole) was Queen’s GH - and I’ve never been that much of a Queen mega fan. Had the CD in the car for years!

I’ve just bought an old vinyl copy of Siouxsie and the Banshees Once Upon a Time: The Singles, and that’s a good GH album.

Occasionally it’s necessary to buy a GH of an artist or group to get one or two songs that were only ever released as singles, and never included on studio albums. Good examples were The Beatles’ ‘Hey Jude’, and Lady Madonna’ never released as album tracks in the U.K. A purchase of the Past Masters albums took care of the problem.

Certainly the very best compilations or greatest hits albums are so familiar with a sequence of material, it can seem odd when playing the originals from which they have been pulled from.

Interesting. I thought it was just me that found these sort of albums generally unsatisfying.

I have a few but when I think about it rarely listen to them. If I like the artist enough I usually buy most of the original albums.

Two reasonably honourable exceptions-the Paul Simon ‘Ultimate Collection’ is a decent mix of old and new, and nicely mastered. Sort of album that gets played in the car. Secondly that most generous and adorable of bands Yo la Tengo ‘Prisoners of Love: A Smattering of Scintillating and Scenescent Songs 1985-2003’ is a good 2CD summary of their early releases but also has a 3rd CD of outtakes and rarities that are mainly worth having.

I’m not so much a fan of greatest hit albums, but there are some excellent “best of” compilations, often containing tracks or versions off tracks that can only be found there, that do get played, even, or perhaps particularly, on vinyl. Some of my favourites:
Neil Young - Decade
The Doors - Weird Scenes Inside The Goldmine
The Beatles Red and Blue albums
Tom Petty & The Heartbreakers Greatest Hits
David Bowie - iSelect