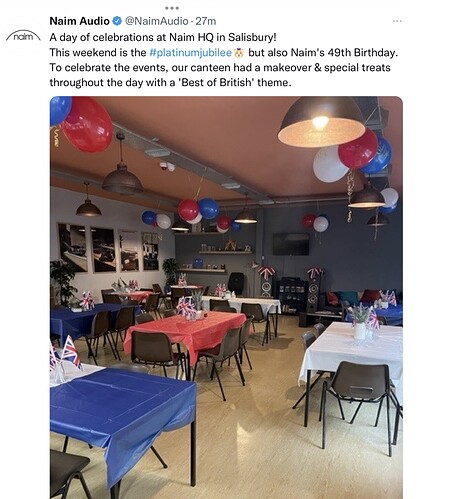 I do hope those tablecloths, balloons and and Union jacks were made in the UK, and not on some foreign shore.

Which means it is the Golden Anniversary next year

Only the cake I guess.

Because they have decided to call it a celebration of the Best of British?

I do hope those tablecloths, balloons and and Union jacks were made in the UK, and not on some foreign shore.

Funnily enough I saw an article earlier with City retailers groups welcoming the positive effects of the Platinum Jubilee on trade etc with some retailers saying how bunting/flags etc were really selling well.

My thoughts were perhaps similar thinking in all likelihood a lot of the items might be made overseas even if commissioned by UK companies, but my greater concern was potentially the amount of plastic waste that might be generated.

Anyhow a great ‘birthday’ for Naim, and lets hope the Platinum Jubilee serves as a reminder of the shared values people across the UK’s constituent nations have held dear for so long, and also bring a small bit of joy to many after the terrible events of the last two and a half years or so.

The Union flags are upside down, which is an insult to the Crown, apparently.

Or a cry for help.

Good spot, I’d always have to check the correct orientation were I to put up a Union Jack/Flag which is probably unlikely. For the average person in this day and age I think you’d have to be lenient as it’s probably not something widely taught. Were you a professional/military person putting proper flags up I think it would be something you’d really need to know about to potentially avoid offence.

Are there other flags which could be displayed incorrectly in terms of the edge/orientation attached to the pole which is the ‘anchor’? I guess even the humble Welsh flag could be incorrect horizontally when attached to a pole.

You learn something new every day. 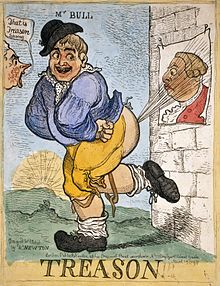 The Treason Felony Act of 1848 makes it an offence to advocate for the abolition of the monarchy. Such advocation is punishable by up to life imprisonment under the Act. Though still in the statute book, the law is no longer enforced. Section 51 of the Criminal Justice and Licensing (Scotland) Act 2010 abolished the common law criminal offences of sedition and "leasing-making" in Scottish law. The latter offence was considered an offence of lèse-majesté or making remarks critical of the monarch ...

The Union flags are upside down, which is an insult to the Crown, apparently. 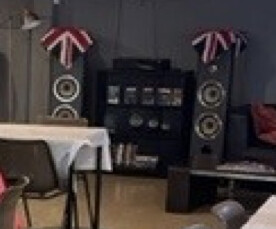