Has anyone tried a Hypex Ncore with Naim?

Hi, was just wondering if anyone has tried a hypex ncore amp with any naim front end gear? Streamers/pre/uniti?

My DIY speakers have an option to convert to an active design, using 2 x hypex ncore plate amps with 2 x 500 watts per speaker.

All I would need is a pre out. I can use my atom for the time being, but would like to maybe use a better pre one day, e.g a new 272 streamer pre.
It would make for a simple system and would be a great upgrade path, but I need to know if they sound ok with the naim front end driving them.

Pre-built Ncore amps are very affordable, you can get a slightly less powerful one (125 or 250 watts) for a few hundred pounds/euros. Perhaps you could just try it out in a passive setup first that way, before deciding if you want to make your speakers active?

nCore is pretty competent. I use a TEAC AP505 to burn in my Stella. It does have this sheen (not sure how to describe) that seems to be common with Class D amps. Not as natural as conventional design but this is nick picking. 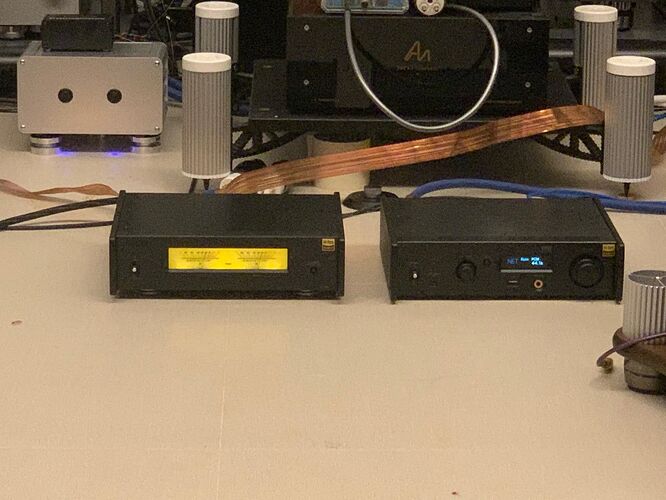 I have a friend who uses the March Audio power mono blocks. He was running them of a NAC 72 for a while and is now running a tube pre-amp. Both sound great to my ears.

I think I remember @afgverhart saying he has used them in the past (now uses Purifi).

I have a Nord 3 channel One Up NC500 which I use for centre and rear duties.

I have slotted it into my main system from time to time and the result has never been poor. How good it was depended on the rest of the system.

A mate tried his 272 with Ncore 500 monos
He was not impressed …and says a naim200 sounds better
Synergy perhaps?

Out of curiosity, which amp do you normally use in your main system. I.e. what was your reference?

As @anon23139555 indicates = synergy. Which is why I was somewhat terse. I could write a lot, but ultimately it will come down to your equipment, ears & room.

I have a couple of friends who rate the Nords very highly …in their systems.

With the SBLs the order of my power amps is:

I think I remember @afgverhart saying he has used them in the past (now uses Purifi).

That is correct. I have been using nCore 400 mono amplifiers and now using a Purifi EVAL1 based stereo amp and the Purifi sounds more smooth to me. Also the low end performance is better with the Purifi. However, as some have said in this topic, matching is important as well. The Purifi outperforms the NAP200 in my setup, mainly because the Dynaudios need some power to really open up. Also the bass performance has improved considereably over the NAP200 with the Purifi.

But again, in my setup with my equipment, cables and power treatment. Anyhow, I have owned and auditioned a lot of equipment, up to really expensive stuff and my current setup outperforms all of them in our room. Yes, it can be even better, but performance per Euro our current setup is top notch.

If I would need to explain why this is the case, I would say the Atom is an excellent pre-amp. Give it a try and you will be amazed about its performance. It brings the Naim signature into the equation. The Purifi brings in the power and as it sounds very neutral it does not has a (lot of) negative influence on the sound of the Atom. Power treatment through the Audioquest Niagara brings blackness and improved 3D imaging. The cables between Atom - Subwoofer - Power amplifier is important but The Canare cables I use now are good enough. The Audioquest Earth is definitely better, but so much more expensive (appr. 10 times). The speaker cables however (AudioQuest Castle Rock) contribut a lot to the open and detailed character of the sound. They bring drive and dynamics into the sound. Yesterday I compared to the Atlas Hyper 3.5 that I have lying around still and that sounds great but less outspoken en more closed (but is also 1/4th of the price of the AQ cable). Finally the LAN isolator and Blue Jeans CAT 6a network cabling are the finishing touch at a relatively low price.

The Purifi amp is to a high extent responsible for being able to hear the added value of all components and tweaks. These are very open, natural sounding and especially neutral class D amps. When matched correctly you get to astonishing results.

Thanks for this advice, i will take it into mind but i think that if they are quite cheap they might not be so well implemented and not provide such a great difference to my atom. This might confuse matters more. Which amps have you seen at this price as this is cheaper than you can actually buy the parts for and make an NC 400 DIY amp…?

Hi, thanks for the reply. I know what you mean by the sheen… I have older hyper modules and they have this sheen. I have just never been able to pin down the difference and put a word to it.
I was hoping that the NCORE amps didn’t have this sheen, and were neutral enough to let the naim streamer pre do its work and sound as it does. Is the TEAC amp an NCORE?

Hi thanks for the reply, i just had a quick look at March Audio. I cant seem to see if they are hypex? Do you know?

This is the description for one of the mono blocks:

Thats great info, thanks for the really detailed reply. It is really good to hear that they are potentially neutral enough to let the Naim sound come through from a streamer/pre. It won’t be the only system for listening, but will be the one attached to the TV so i want some really good power for movie duties! The Atom does admirably well but i know 500 watts will make a difference.

I should add that I tried one of March power amps on my Nova and SN2. Whilst it drove the speakers better, the soundstage and dynamics were compromised and the Nova and SN2 were better without the added power amp. But on my friends 72 it sounded great, which I think points to the Naim Uniti’s and Naits running best with Naim power amps and different power amps best run of Naim pre-amps.

Yeah i think you are right here. I have tried the Atom with a few different power amps and i must say the performance is not what i know those amps are capable of. Although i wouldn’t expect a great deal of the budget to go into pre outs on an all in one.

And still, it sounds terrific over here.

Yeah, actually scratch that last comment. I just got out my old hypex diy ucd 180 and had a good session once warmed up. I must say it definitely beats the atom in terms of detail and overall dynamics but the Atom just seems to have a smoother coherent sound that is a more pleasing. As I remember it when I tried before.
The point is… the pre outs definitely deliver plenty of detail.
I am desperately trying to avoid climbing the Never ending Naim upgrade ladder and looking for alternatives whilst keeping as much of the “Naim sound” as possible. Ill check out the purifi amps.