Have you ever had a musical epiphany? please share yours

Don’t keep us in suspense…

Only one of them would have been an epiphany…

I have had two ‘musical epiphanies’ along the lines of the OP. The first was 50 years ago, as described below and still vivid in my memory. The second I’ll recount in a subsequent post.

Great story about that Deep Purple gig and shame you have lost your pictures. I went for a coffee in The Roundhouse Cafe a few months ago. Though full of people, there was little atmosphere, as most seemed consumed by smartphones and tablets. But the walls rocked with the echoes of all that has happened in the past. You must be one of those that left that energy there

I never got to the round house in those ‘Heady’ days, I lived in East Yorkshire, but you reminded me of trip with my mates to see The Grateful Dead at Ally Pally - late 1974 I think. As far as not remembering exact dates, I am sure we all forgive you. I, like many people at that time, saw a lot of live music, it was relatively affordable and remember spending a whole summer doing festivals in the early 70’s. But I cannot for the life of me remember what year it was?

and remember spending a whole summer doing festivals in the early 70’s. But I cannot for the life of me remember what year it was

Must’ve been a heady year then!

I take it that we’re allowed more than one musical epiphany, so a quick cut and paste from an earlier contribution on another thread:

Muddy Waters and his band were in town for a concert at, (I think), The Rainbow, and the day before they were due to appear, word went round that they were doing a warmup rehearsal gig at Dingwalls in Camden.

Hotfoot across London, and, sure enough, there they were, onstage, and doing the equivalent of a Chicago blues club set … truly memorable!

Managed to find this on a music memorabilia site, and it now hangs on the music room wall … ah, memories! 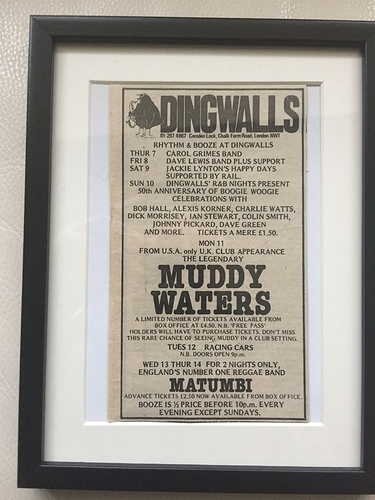 So many bands to see then. No one could have seen em all

In my first post I said I had two. Here is the second one - very different yet in some ways the same…

I have always liked classical music - I was brought up on it, and it predated my love of rock. But I never liked opera. My parents sometimes listened on the radio, but I couldn’t stand it: just unpleasant noise, even though the music could be good, but spoilt by the strident sopranos and tenors wailing in foreign languages…

Roll on a while… And context is relevant: I love live theatre, and I really like the music of Bizet’s Carmen. So, some time in the early to mid 1990s, living in Cardiff, the home of Welsh National Opera, my wife and I saw that there was a performance of Carmen at the local theatre, where we were regular patrons, and decided to give it a try.

Well, it wasn’t a disaster: I didn’t hate it, it wasn’t unpleasant, but it did nothing for me. Oh well, opera wasn’t for me.

Now, I don’t know what prompted it. Maybe because WNO was so prominent in Cardiff. Maybe because we felt masochistic. Who knows? But maybe 5 years or so late we decided to have one more go at opera - give it one last chance. So we went to see Puccini’s Turandot.

Wow! WOW!! WOW!!! The combination of dramatic orchestral music, live theatre, the power of the human voice, and tragic story. Raw emotion conveyed through sight and sound, and with intensity. What intensity!! I don’t think there was a dry eye in tne theatre - and my eyes were unashamedly pouring. The first time I had cried in public since I was a young kid. I was hooked, absolutely: hook, line, sinker … rod and boat as well!!

In the several years that followed living there we saw more tragic operas, Puccini and Verdi, and the experience multiplied, though Turandot as my first love will be the best forever.

I now can buy and appreciate opera at home, though quickest to assimilate were the ones I had experienced live. No, not can buy, But have bought and do buy, and play often, and love. A complete convert, a real epiphany.

However, I much prefer full operas and don’t listen just to exempts or individual arias, although where they are ones I know in the context of the opera I can appreciate them - an example, perhaps, is Nessun Dorma, which when Pavarotti’s version strangely hit the UK pop charts in 1970 was just ‘rubbish opera’ to me, but since getting hooked, when I hear it now my memory transports me into the music and story and brings a tear to my eye.

So, then I went to see a comic opera (Barber of Seville), but was disappointed - I didn’t dislike it, but it didn’t trigger any emotion. However there was another difference, not just comedy vs tragedy, namely that it was sung in English, whereas the other ones we’d seen had been in original language, with surtitles. And the trouble is, without surtitles it is a strain to follow the words, and I think it was that that inhibited the flow, so my preference is firmly original language with surtitles - or even just a synopsis, not translated into English.

I cannot get enough of live opera - but it is limited by availability and cost. One thing I love about holidaying in some other European countries, especially Italy, is how easy and inexpensive it is to get to see live opera - really puts Britain to shame, where opera is very expensive and productions few. A small production need not mean any less well done or involving than a lavish one: I had a wonderful experience the first time I discovered these some years ago in Venice: a low budget production in what in UK could have been a village hall, flat floor with ordinary chairs, small stage, small orchestra …but the same big emotion. Done many times since in various places!

2 Likes
Albums that serve as a gateway to music genres
Artists/Bands you discovered years after everyone else had?
Innocent_Bystander March 28, 2020, 2:20pm #41

So many bands to see then. No one could have seen em all

Funny that, it was Turandot - a late night TV broadcast from an open air theatre in Italy I think - that turned my head about listening to opera (long before Nessun Dorma was played everywhere).
Absolutely stunning…

Been a sucker for Puccini ever since. Still can’t quite get enthused about Wagner’s voices yet. The music’s fine but the singing…all that Germanic droning on!

Puccini and Verdi my joint favourites, though Puccini is better at really dramatic music.

One I’d like to see live is Delibes’ Lakmé, but have yet to find a performance so not yet had the full experience

Recommend me a Wagner, @Innocent_Bystander …to see if I can ‘get’ the singing. I’ve tended to listen only to the overtures. Have a boxset of Klemperer (iirc) doing them. Good stuff.

But the singing still defeats me, on the whole.

Sorry, I haven’t been inspired to try Wagner yet - perhaps someone else can (for both of us)? Or maybe need to go to the opera thread…

Playing ‘Kid A’ by Radiohead on my CD5 for the first time. Wow!

Apologies, thought you said Puch and Wagner were joint favourites…we both need some Wagnerisation then!

Yes, I’ve looked in the opera thread. I feel like a noob there…!

Being a Naim forum, I have to say it was the first time I heard a Naim amp

Apologies, thought you said Puch and Wagner were joint favourites…

Wierd: I typed Verdi - or intended to: iPad clearly has a musical aversion and substituted, without my checking back! Posr amended now.

I’m going to have to listen to some Puccini now after you guys taking about it. Where to start ?

If you’re not already into opera I’d say best go and see a live performance - but not easy at the best of times, and of course impossible at the moment. And sung in Italian. Assuming you don’t want to wait, next best would probably be a video of a live performance if you can find one to stream or download (with subtitles). And I suggest at least reading a synopsis of the plot before listening. If only audio is available I find that with an unknown opera a copy of the libretto with an English translation can be useful to follow as well.

I’d try IL Trittico (three short operas. Home of the beautiful Mio Babbino Caro aria. All are really good), Butterfly or La Boheme. They’re all great.
Turandot is a given.
Then Tosca and Manon

We’ll get to La Fianciulla (sp?) later…his Wild West one!

Interesting, and something quite moving about the image you have conjured.

I am not into visual art, not really getting what other people see in pictures, with few exceptions, but nevertheless the concept of a group of people of different cultures linked by a common interest, learning about each others’ art and culture (and food) sounds really nice- and the initially eerie then soulful experience you described sends a (pleasant) shiver up my spine.