Hello there!
I’ve tried to connect a Headphone Amp (not Naim) to my Supernait2. I used the HDD output and a PIN5 to RCA cable. Well, it doesn’t work. All I hear is a light bzzzz but nothing else. The cable is a cheap one from China (I wanted to try first, before I buy some more extensive cable) but it’s brand new, so I suppose it is ok. Do you have any suggestions? I know that a Headline would be the simple way but there’s a lot of Headphone Amps out there which are better and far less expensive.

This could easily be an issue with the interconnect you are using. The socket at the back of the amp is simultaneously an input and output socket, my guess is your cable is an input one ie the rca plugs are wired to the input pins on the din not the output. Look for a 5 pin din to 4 x rca interconnect.

I think Robert has it correct here; most cables will be for DIN in/out (play), whereas you need DIN in/out (rec). Best get a cable from someone who specialises in cables for Naim.

The pin assignment is on the back of most Naim amps. You can easily re-solder the DIN plug to switch pins. Some makers plugs even allow you to pull the pins out of a plastic frame and just re-insert them in a different order without re-soldering. As long as the DIN plug can be opened, it should be a DIY job.

Thanks a lot! So, it looks like I have the wrong cable. I got that on Amazon but they didn’t specify wether it was a rec cable or a play cable. I’ll look with more attention for the correct one.

Nope…I can only find DIN to RCA cables, without specification about being play or rec cables

And I don’t really want, for the moment, spend more than 200€ for a Naim cable…any options?

As suggested further up this thread, get a DIN to 4x RCA. Two will be for play and two for record. The pair that make sounds when plugged into the headphone amp will be the record ones

Alright, then I got it wrong. I thought it depends on the DIN end of the cable.

A DIN - RCA Phono tape interconnect will work just fine. Just be sure to use the REC RCA phonos rather than the PLAY ones.

Richard, I’m so dumb, I’m sorry. How can I tell if the RCA are REC or PLAY? On the Naim Website all I can find is interconnect cables (with various ends like DIN, RCA and so on), period. No words about them being REC or PLAY.

A tape DIN-RCA interconnect has two pairs of RCAs, one pair go in one direction (away from the DIN) and the other pair go in the other direction (toward the DIN); this allows a player/recorder to both play and also to receive signal to record - you should connect as appropriate. 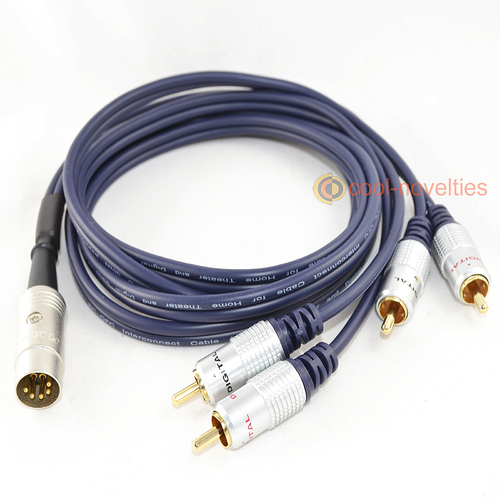 Yes that is what Richard is suggesting. Two of those plugs will be for record and two for playback. You can use the two that work for you, left and right will be written in them. Then tape up the other two so they don’t touch anything.

HDD output? Please give more detail -what amp? HDD most commonly denotes hard disk drive, which would be a digital output that can’t be fed direct to an analog amp…

Ah, thanks for educating me - And now my eyesight omission corrected and looking at pic I can see it is DIN not a normal digital connection, though it seems odd to me calling it a hard disc drive!

Naim had to put a name in the button and at the time must have seemed appropriate - my SN3 has that input now labelled “stream” but my cassette deck is perfectly happy connected to it.

Yup, I might even still have filed away somewhere the sheet that came with my NAC52.

Ok, thanks again for your answers! I’ll order that cable. One more question about the 2 lose (play) RCA ends: won’t they cause any buzz or interference noise, lying there used?