What is the difference in CD ripping between HDX-SSD and Uniti Core?
What about comparison of the streaming quality?

A never-used HDX-SSD has fallen into my lap and I’m considering trading it for a device with fewer glitches/easier connectivity capability.

Does the Uniti Core ripping match or exceed the HDX or would I be better off holding on to the HDX until I can get my CDs ripped?

I’m floored at how well the HDX still performs compared to other more-modern streamers. 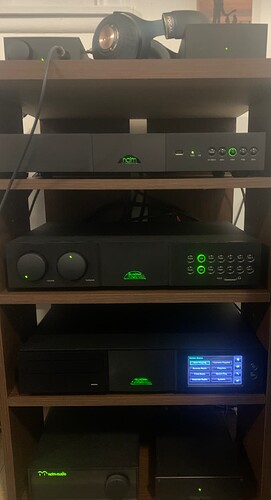 IMO there will be no difference in the rips from the Core and the HDX.

Have you tried using the digital output of the HDX into the nDac? In my experience the HDX has a great digital output the nDac sounds amazing when fed from the HDX.

Yes, I’ve only used the BNC out to my DAC so far.

The old Naim ripper/servers were always a bit basic in their ability to deal with metadata, and to serve files from a decent searchable database. I’ve had a couple of extended plays with a Core hoping that it would improve on some of these shortcomings but it’s actually even more basic, and a real step backwards in my view. No doubt some will be happy enough with its abilities, but I would suggest you try it carefully before parting with your cash.
In terms of sound quality I could gear no significant differences when used as a UPnP server. Obviously that doesn’t take into account the quality of the DAC in the HDX.

As you already have the HDX I would use it to rip your collection, it will do a good job but I would save them as FLAC not WAV to avoid metadata compatibility issues if you use a non-Naim server or streamer in future.

Yes, I think most people would use the BNC digital output from the HDX into an nDac using Naim’s DC-1 cable.

As Chris mentions - if you use the HDX to rip your CDs then make sure that you rip to FLAC and not WAV (selectable in the HDX settings) so that the metadata will move with the files should you copy them onto a different device in future.

The HDX also has the option to convert FLAC to WAV on the fly, still a pity that the Core doesn’t have this functionality.

I actually have both the HDX and the Core. Ripping wise, the Core provides more information if a rip goes bad (i.e. errors in ripping and on what track) which you do not get with the HDX. The Core also taps into more databases than the HDX for metadata etc.
Rip Quality - pretty much indistinguishable between the two. However I have found the HDX will rip the same CD with no errors whereas the Core will report errors. Probably a function of the CD drive used and maybe differences in the ripping software.
I must caution you that the HDX (both versions, SSD and HD) run hot. The HDX does need to have lots of space around them to stay cool and the shut down sequence must be followed correctly to avoid problems. Naim crammed a lot of electronics that generates significant heat into the HDX box. Spares are becoming quite limited for the HDX. Have had mine for almost 10 years and it has seen more than its fair share of servicing (several HD failures, 2 power supply replacements, 1 motherboard replacement). Worthwhile upgrades to the HDX are adding an XPS and the DAC; when I did both it was a noticeable and significant upgrade to the sound.
Sound quality is very comparable between the Core and the HDX when accessed through an NDS/555PS.
I do prefer the n-serve app for operating the HDX over the Naim app for the Core, however there are plus and minuses to both apps.
A word of advice - set up the backup facility on the HDX and use it. If ripping to the HDX this is an absolute necessity. You will need an external drive (NAS or other type) to do this. Recently completed a full backup of almost 2TB of music stored on the HDX and it took about a week to do - not a fast process.
Hope this rambling helps.

Thanks all,
This is extremely helpful and gives me some things to think about.

Additional question: Is there a preferred/recommended music share/store?
It looks like I’m experiencing a similar issue as many others with my share showing as off-line.

I have followed every line of the instructions, but the HDX will not access my shared folders on my Mac mini.
It appears as an available share, but only shows as “offline”.

Would something like a NUC be a better option?

Are you running Catalina or newer? It seems that Apple may have disabled the smb1 protocol support with Catalina, and the HDX needs it.

A web search for macOS Catalina SMB1 might help

Thanks all.
I’m still having issues with this.
It looks like I’ll be able to use SonicTransporter from SGC, so I’ll give that a try and also be able to play Roon through the HDX.

How will you get the output from the Sonic Transporter to play into your DAC?

I don’t know the technical details, but it appears the SonicTransporter acts as a bridge to turn the upnp player into a Roon endpoint.

I reached out to SGC and they say that other HDX owners have taken the same path.

I can see that it would turn a UPnP streaming client such as an NDX into a Roon endpoint but I can’t see how it would work with a UPnP server like the HDX. Roon will serve files from an HDX if configured to do so.