Hi, I would be interested in any wisdom from the forum about the torque Nm for cart mounting bolts to Aro headshell.
I see Rega have a .4 Nm torque wrench, that seems very low to me particularly when the cart I removed/replaced bolts were rather tight. Would .4 Nm even be tight enough on the Aro setup?
Having even/same torque either side would be important I guess. Yes I know try and hear, just not real interested with playing around as it’s rather a bit scary for a newby.
Cheers

I’ve just bought a very light torque driver to try and get a handle on this very thing, I even have an Aro though it’s no longer my main arm, I’ve just not got round to it yet. The hot and humid weather here at the moment doesn’t help. The arm pillar screw torque will also bear so pinning down.
I’ll be experimenting with torque of various screws on my Schröder Reference when my SPU Royal N returns from Ortofon. I might get round to the Aro later.

There’s a comment on Ekkehart Strauss’s blog for Feb this year, which relates to cartridge set up, to whit that it’s cartridge dependent, the examples given were a Lyra and a Koetsu wood bodied with the Lyra benefitting from less tightness. There is no mention of which Arm.

Oh fantastic! Well I can confirm a easily discernible audio difference can be had by playing around with the headshell bolts. While my new Kleso SL has plenty of hours until break in, tighter seems to firm the base up but the soundstage narrows and becomes a little bit stressed. Tracking down a Rega torque tool (.4 Nm) was interesting, so using that the sound stage just relaxed and open up, bottom end lost a little bit of firmness.
Would be very interested to read anybody else’s experiments/knowledge on this particular subject.
Found a company called AnalogMagik seem to take this seriously.

I see Rega have a .4 Nm torque wrench

Because their carts have traditionally been plastic-bodied. For metal-bodied Linns (Lyras in disguise) I believe the recommendation has generally been in the 1Nm range.

I would expect that to similarly apply to a metal-bodied Lyra going onto an Aro.

Thanks, interesting. I do have a lovely gedore wrench which has 1-6 Nm, I’ll try and hunt down the correct size bit and try 1Nm 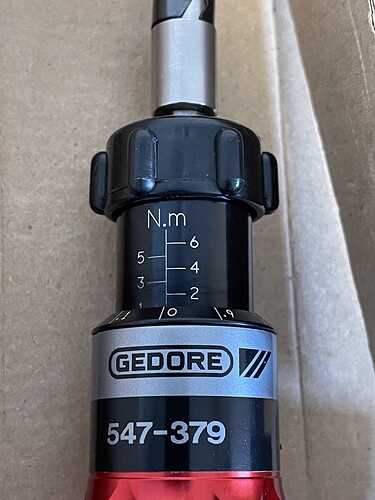 My Aro currently resides on a mk 2 Townshend Rock and carries a mono version of a London Decca Maroon. The trick there is not to strip the threads in the soft plastic. It also has a Townshend outrigger as it tended to jump out of the groove of anything cut on a stereo lathe, like the Schnabel Beethoven sonatas reissued in boxed sets. I’ve stripped them once so have Dynavector 2.6mm bolts that just about hold it all together.
With a previous cartridge I could hear some effect of the armboard to plinth screw tightness.
My Schröder carries its cartridge on a brass or aluminium plate secured to the arm by a single screw, the tightness of this has an easily audible effect but I’ve only played with this by feel and ear so far. 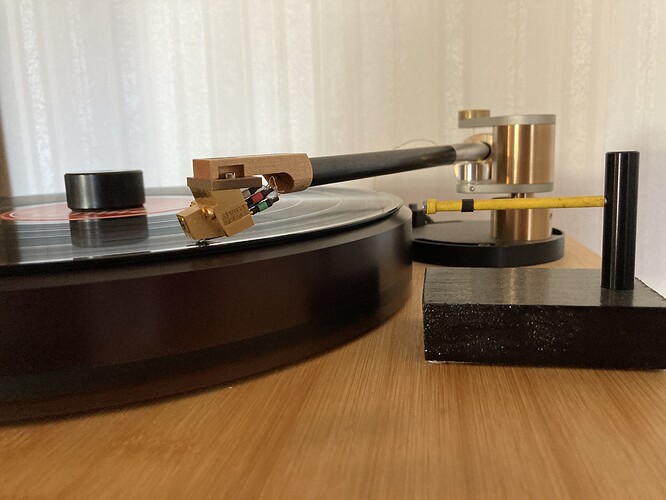 image4032×3024 2 MB
Yes I have spotted the mat.
The actual catrridge bolts are masked by the headshell so the alignment has to reset to play with those. Other bolts that I’ve found have an audible impact are the counterweight grubscrew and the height adjustor locking screw. The screws holding the two plates carrying the magnet and arm hanger we’re told not to mess with but the armboard to plinth, armboard to the lower brass block and the grubscrew securing the pillar to the latter are fair game for experiment.
You get off lightly with an Aro, only the cartridge bolts, pillar grub screw, armboard and the clamping ring under the arm to play with.
1 Like
Emil June 18, 2021, 12:45pm #7

I have an Aro with Linn Kandid. I am pretty sure that the response from @Emil is pretty close. I would not go over 0.4Nm. I approached the torque as a NIP up as Peter at Cymbiosis states it. I found that after the bolt seats and you get a 1/4 turn, it’s about 0.3 to 0.4Nm. Those are some small fine threads, and you don’t want to over tighten. I do have a sturtevant torque tool and used that to determine the nip up torque. I have notes at home, I will double check when I get home from work. If the data is significantly different I will reply.

One thing I’d say is that 1Nm is a bit on the high side for sure. That said, it’s very commonly quoted for the Kandid when mounted to an Ekos tonearm in the forum where people like to discuss torques for LP12 components.

Now, maybe the Aro headsheel can’t take that - I don’t know. I’d be surprised, though: I would expect when doing a Linn cartridge to an Aro (and this would go all the way back to the Troika) that people would do way more than a "nip up’ when you think of the whole Linn tight story.

@Cymbiosis states that for the alignment phase, before you actually lock the position of the cartridge. His setup guide is available online, but I think it’s OK to quote the relevant parts of section II here (apologies to moderation if not):

“The arm can now be reintroduced to the collar and one can set about checking the cartridge
alignment in the head-shell. Please remember at this point, to just very lightly nip the cartridge
mounting screws when the arm is on the deck to hold the aligned position once achieved”

And then, about actual tightening:

“The tightening torques of head-shell bolts and other fixings on the LP12 is a complete subject area
in itself and can be referenced elsewhere on social media if you wish. Suffice to say that one
tightens up the bolts sufficiently using a bit of common sense as to what is tight, as over-tightening
will start to deform the head-shell, and this is undesirable.”

“Overall, use some common sense here to get the fixings as tight as is viably possible.”

So, no explicit values, but certainly not a “nip up”. I would expect this to vary by cartridge and arm, though.

Looks about right…… I have all the new editions saved on pdf, it was my training guide and followed step by step during my first tear down and rebuild of an LP12.
Great material. I even made a few phone calls across the pond to chat, Peter was a great help. I should have referred the OP to the Cymbiosis site for more info, but you covered it.

The problem with a torque wrench of these small sizes is that your hand is going to rely on the wrench stopping regardless of what the bolt is actually doing inside the headshell. There are many variables when tightening up and once the cartridge is in perfect contact with the headshell, any more tightening is either stretching the thread and/or deforming the materials.

I use torque wrenches for specific applications, but for a delicate cartridge, I use feel. If you use a small allen key, you can feel when there’s no more easy tightening (where the two surfaces have contacted) and just a gentle nip-up after that, equally on both screws, does the job. As long as you’re consistent in both screws and you’ve nipped them up, they’re fine.

So to my conclusion In my setup Rega’s .4 Nm gave a slightly wider sound stage but a little thinner, the base had slightly less authority. Then after re-torquing the bolts to finger tight on each side (which I would suggest would be about .3 and a bit Nm) I used the supplied hexagon key and tweaked each bolt about 1/16 of a turn. It’s like setting up Mana. This gave a more even sound stage tighter base and dear I say it better PRat. I definitely have the impression that it has a sweet spot to find and It’s found.

Thank you for the input, I’ve found it fascinating.

On a side note my friend brought over his Aro with a Lyra Titan i on it. He told me it was a special build and has the cross core/coil??? technology in it ( was a replacement rebuild in recent times) it’s been sitting in a cupboard for a while as part of a second system yet to be setup, so of course onto my linn it went. Wow now that’s a very impressive thing to be had indeed, jaw dropping in fact. My 52/135 setup sung like angels, I am completely blown away, I really didn’t think the prefix K had it in it, just goosebumps!!
Noise floor dropped significantly everything was just placed right in front of you, the energy and delivery of the sound was so so so authoritative. I’ve only ever herd that from a 500 system with a bit over $40,000 spinning into it. An overwhelming sense of satisfaction enveloped me, knowing full well that In the future that’s going to be my house sound. To tell you the truth it excites the hell out of me😎