I am ready for a backup, so turned to the Naim iOS app and did the necessary keystrokes to access the Backup process, but it doesn’t show me any options for backup. My desktop is on and I have a USB portable drive at the ready. I also have a Sonic Transporter on the Network. The Uniti Core doesn’t seem to recognize either of them, showing me a “no drive found” message.

I’ve refreshed the app. I’ve done a hard reset of the Core.

You say the usb portable drive is “at the ready.” Is it connected & turned on so Core can recognize it?

You say the usb portable drive is “at the ready.” Is it connected & turned on so Core can recognize it?

It is plugged into a USB port on my desktop computer. They are located in different rooms. I guess I should plug the portable drive into the Core, though I thought it would recognize the remote drive anyway.

It will work it you plug it into the USB port on the front of the Core. Don’t know about the network drive

Perhaps I need to figure out how to set up a home network?

It is another computer! As I’ve said many times (!) all of these network devices are basically computers.

If you want to back up to a USB drive then the easy way really is to plug it into the socket in the front of the Core. Then after you’ve backed up you can put it somewhere safe until the next time.
Best
David

S[quote=“davidhendon, post:6, topic:411”]
If you want to back up to a USB drive then the easy way really is to plug it into the socket in the front of the Core. Then after you’ve backed up you can put it somewhere safe until the next time.
Best
[/quote]

Actually, I really want to back up to the Sonic Transporter. I thought both should be visible as an option on the network, then I could choose either and I wouldn’t have to physically plug the USB drive indirectly into the Uniti Core. I think that’s what a home network does. So maybe I need to set one up.

Unfortunately, I can’t do the obvious, which would be to copy the USB backup to the Sonic Transporter because I get an error message that some of the file names are too long.

I’m off to visit the Microsoft Store today. Hopefully they can help with this. And the SMB issue too.

Hope it goes well at the Microsoft store…I will wait for further news impatiently!
Best

Having both is a bit of a luxury for me, but I have the needed space and I like Windows 7 much better.

I was able to get in questions about the network issues I’m having and I now have instructions for making progress with that, though I don’t know if I have all the answers until I try them out.

I am much more confident about the advice they gave to gain access to the Downloads folder for Windows 10. Windows 7, not so much.

For Windows 10 the how to article is here: 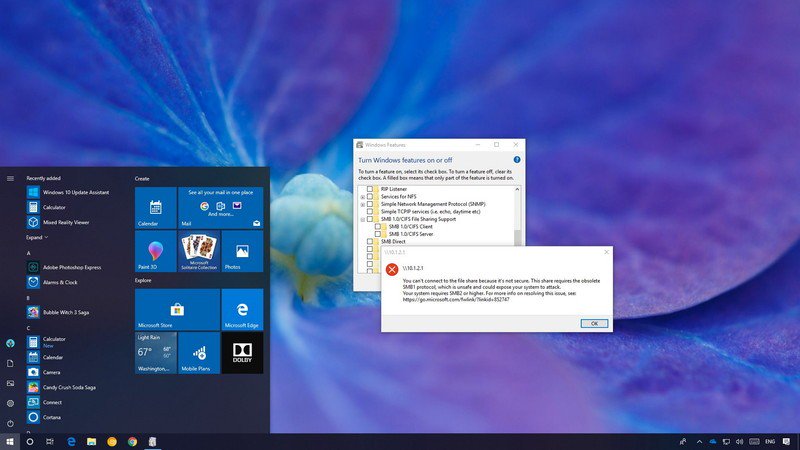 In this guide, we show you the steps to regain access to your network files when connecting to a device that is still using the SMB version 1 protocol.

It begins with our problem.

If you can no longer access network files, chances are your device is still using the SMB version 1 protocol, which is no longer supported on Windows 10. Here’s a workaround to regain access to your files.”

The article is clearly written and has well illustrated examples and it doesn’t look all that difficult. It advises that you make the changes temporary and gives the steps needed to reverse the changes.

I think it’s SMB v2 that the Core uses, not SMB v1, at least that’s what I remember from earlier discussions on the old forum and it’s also what my iPad Pro tells me it used when I navigated to the Core downloads folder with it an hour or so ago.
Best
David