Following on from my stacking order question yesterday I rebuilt my two stacks of Hutter; put the brawn on the right and the brains on the left. Cabling looks much better and the TV sounded fine last night. Hard to judge with CD.

However, this morning I put Golden Hour by Kacey Musgraves on. No bass at all.

To me, that suggests Hi-Line or Burndy. Hi-Line has been repaired once and, albeit that it’s very twisted, it looks fine to me. Certainly doesn’t look broken at either end. My suspicion is the Burndy. It’s ridiculously rigid but…

Is it possible I’ve put it back the wrong way round? Thought I’d labelled it correctly but what if I’ve not? Is it possible to change it round on the fly or do I need to power down etc?

Prior to everything coming back to life I forgot to connect the HL to the CDX2. I can’t imagine that impacted but… well, you tell me.

Just to eliminate the obvious - are the speaker cables in connected in phase?

Yes, I did realise that I couldn’t recall whether the speaker cables were facing up or down (it was a long day) so I traced back from the red connection on the right speaker on one side and all was well. Presumably no issue other than odd sound if it turns out they are out of phase?

Can you feel the hard collar underneath the Burndy sheath and is it on the CDX2 end of the cable? Burndy locked into position?

There’s a metal collar on both ends. Both locked into position. I thought there was some way of telling one end from the other?

If you feel along the collar you should be able to feel the Burndy collar (the direction indicator) underneath the sheath. It’s not the metal locking collars

Any chance of a picture? I’m not sure what you mean. 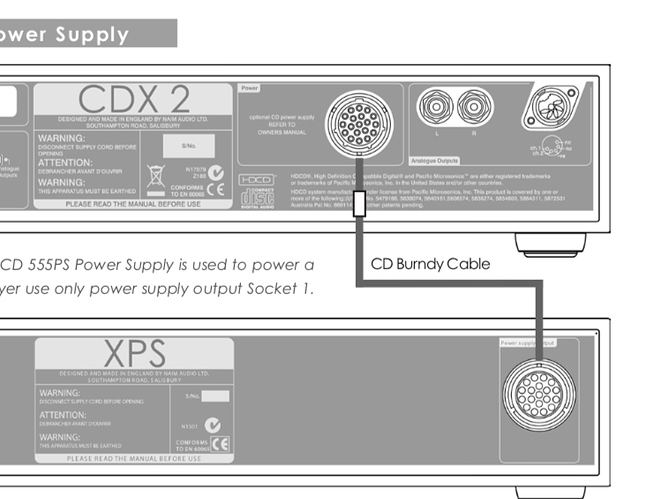 Momentarily way from home so can’t check as yet but you’re saying that the indicator should be at the CDX2 end? If it isn’t then we’re back to the question of whether I need to power down.

Is that a white label on the cable in that diagram? Does that have any relevance?

Yes, definitely power down for the Burndy. 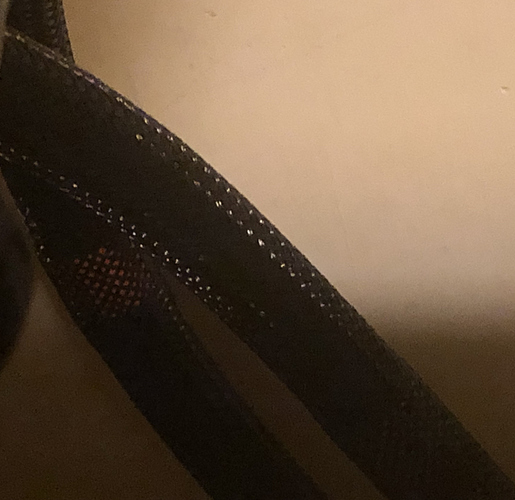 The photo is from my NDS which has two Burndies. One Burndy has a red collar under the cable sheath and the other has a green collar. Apologies for the poor quality photo

Thanks both for this. That looks nothing like my Burndy.

Yes, the S-XPS doesn’t have an outer mesh sheath, so looks different. However the banded end should look obvious.

This is what’s going into my CDX2.

Is the band nearest the cdx2?

Do you mean this white band Richard? It’s closer to the XPS2.

Ok, that’s wrong. It needs to be the other way around.

Fantastic, that’s what I needed to know. Powering down now.

Clearly need to do some work on my labelling schemes when I rebuild the system.

Wholly unconvinced. Some bass. Loads more detail, which always tends to happen when the mids get sucked out. Have slackened the two collars on the HC2 DR. Seem to recall that being “a thing”.

Going to recheck the speaker cable polarity. Red to red etc. Damned if I can think of anything else bar a call to my dealer.

You’ve been looking at the wrong stuff, the answer is not in the burndy or loosening of DIN collars. I would focus on the wiring from the power amp to the speakers, are you really sure you don’t have one out of phase ??? I advise to re-check everything. Is one of the speakers not functioning correctly, try pulling out the speaker cable plug on one & listen to the other, does that one speaker have ‘normal’ bass, then try it on the other speaker.

Seeing as accidentally kicking the speaker cables started this then I’m inclined to agree but I’ve traced back a second time and I’m confident they’re not out of phase.

I’ll do it a third time momentarily. I suppose it’s possible both could have been inserted the wrong way. Red at the speaker end to black at the power amp end etc. but it would be both cables rather than one. My inclination would be to reverse the cables into the power amp i.e. at present the Naim plugs are inserted with the logo upwards so instead perhaps turn them upside down? Thoughts? Can I do this with the system muted or are we back to another power down?

Thank you for all contributions thus far.