Out of phase is a bit of a misleading term, its when ONE speaker has its polarity reversed compared to the other. In other words one speaker is connected Red-Red & Black-Black & the other speaker is Red-Black & Black-Red
Its OK to have both speakers with reversed polarity, truth is there is no actual reversed polarity, speakers will work & give identical performance no matter which way they are connected, provided both are connected the same.

Pulling speakers cables can be done with the amp muted

@Mike-B I was aware of what out of phase meant but thanks. Traced back the A5 (again) from the right of the 200s right channel (red) all the way back to the red post of my right speaker. Definitely correct. Logically it should be. System was sounding perfect right up until I knocked the speaker cables pre-Christmas.

Ahhh OK that has sorted that question, sorry I sent you on a goose chase. Back to the IC’s it is then.

No problem sir. Nothing to apologise for. If I was good at this I’d have labelled the ends of my Burndy correctly before removing it whilst doing a rebuild. I clearly need telling to re-check things

Check that the Burndy isn’t sitting on the floor or touching other cables? … general cable housekeeping stuff

It’s just about off the floor.

I’m circumspect that (given all your advices around things being properly connected vis I/C’s and the burndy(s)) that the issues stem directly from these items. Whenever I’ve had issues with I/C’s, the sound drops out or nasty/scary noises have happened.

Re the NACA5, if you’re not aware, you should detect a slight ridge on one side of the cable and there also should be directional arrows (latter aspect not relevant here). This is a quick way to check the way the terminals are wired up, rather than having to chase the cable along its length. On my NACA5 the ridge is Black side, with the directional arrow on the Red side (kinda logical).

A couple of things which spring to mind:

1- when checking the speaker cable terminals at the amp end are you aware that the Reds are towards the outside edges of the casework? This means that the NAIM amp end terminations should be different - which sometimes means that one set has to be inverted to marry to the right terminals i.e. get the phasing OK.

2- as the NACA5 enters the NAIM amp end terminals, is it twisted? This shouldn’t be the case - all I’m thinking here is whether what appears to be say the Red terminal/prong is actually the case. IIRC, this shouldn’t be possible from a physical perspective given the tightness of the NAIM terminals (but stranger things have happened!).

I’ve had the A5 for a very very long time. Previously banana plugs into a Pioneer A400 and then finally Naim plugs into the 200 since about 2008. New speakers in 2011 resulted in bare wires to binding posts at that end but if it’s wrong in any way then it’s been wrong for 8 years!

As I say, it was absolutely fine up to Christmas.

Burndy also not touching the other cables? Other than that if all your connections correct, speakers haven’t been moved maybe take a break and llet it all settle back in 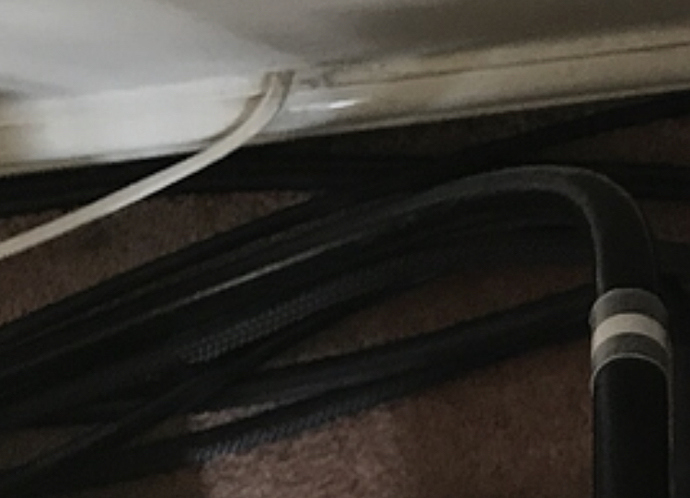 It doesn’t look it but it’s literally not touching anything. Very irritating.

You’ll gather the pre-Christmas hoover which appeared to cause all this was the last one done.

Yes, annoying when something happens and you can’t get back to its original state for whatever reason. Unless anyone else can offer some suggestions, you can only take a break now, let it all bed in and hope it comes back.

Cheers. It’s got until Tuesday morning. At that point it’s dealer time.

Interesting looking speakers. Did you manage to alter the gap height on the Zus while vacuuming?
Assuming if you did it’s unlikely to be to both, try a mono recording and listen to it through each in turn, can you adjust balance with the remote on a 202? I seem to remember that both buttons pressed together will centre it which is not the case with 282 and up so presumably you can.

Mike, have you checked the connectors to see whether there is any damage to the conductors?

Thanks for all the responses. Long day at work so apologies for the delayed response. I’ll try and answer all your points in turn.

@HappyListener yes I am aware that the red terminals aren’t where one might expect on other manufacturers kit. Having had no problem pre-Christmas and traced back three times now I’m happy they’re not out of phase. Also tried mono recordings of Dylan and The Beatles and the only untoward thing going on was lack of bass. No image issues or anything. The cables do turn as they enter the plastic Naim plug casing but they’re visibly correct.

Also, as said previously, no major issue with the TV sound through the system.

You sound like you’ve been unlucky with ICs. I’ve had a broken Hi-Line repaired by a Naim. The only symptoms were that it looked wrong and the bass had died. Similarly, Mark Raggett kindly donated the Burndy I’m currently using after it become obvious that his simply sounded better. No symptoms at all until he tried an A/B comparison.

@Yeti Zu Soul Superfly. Love them to bits. Just a shame I couldn’t stretch to Druids which play beautifully quietly as well as loud. However, that gap took an age to get right and it hasn’t been adjusted in 7 or so years. I do the hoovering is no-one gets to mess with or move the speakers

As per the above I’ve already tried the mono angle and there were no odd artefacts or hollow image etc. You are right by the way. The 202 remote can adjust the balance. My last trauma with this system was wondering why one speaker had died only to eventually discover the (then) 11 year old had faffed with the remote and flown the balance to one side. At 13 he has QB and I’m not regretting it.

@Richard.Dane which connectors are you referring to?

I chatted to my dealer about rebuilding last week (and the lack of bass) and he suggested it as an opportunity to clean every connection with multiple plugging/unplugging. All done and nothing obviously untoward albeit I noticed a bit of wear around the back of either the CDX2 or 202 on the Burndy socket itself. Where the black pin goes in rather than the gold. Can’t think which device now but it struck me as natural rather than anything untoward. Nothing anywhere else though.

@WhatshisNaim I noticed that the two Snaics coming out of the HC 2 DR were coming inside the Burndy quite high up and actually were touching. Powered down and moved them to the outside and no longer touching. It’s nowhere near as tidy as others manage and I may be hallucinating but it does seem to have wrought a marginal improvement. However, whole family have listened in tests with Golden Hour by Kacey Musgraves, Live At The Counter Eurovision by Misty In Roots and The Mix by Kraftwerk. No bass is the unanimous verdict.

I also pulled the CDX2 forward to the very edge of the Hutter to a position which guaranteed the Burndy and Hi-Line weren’t touching anything. No difference.

The Hi-Line just about touches the carpet. The only way to avoid this would be to use the longer Hutter separators or another shelf layer. Again though, it wasn’t a problem pre-Christmas so I don’t get why now.

So, going to live with whilst I watch some TV and see where we are tomorrow.

Mike, I’m referring to the speaker connectors. Check for broken conductors within the plugs.

No untoward noises but will do.

If I had this issue and having ruled out the phasing aspect and noting your comments that the Hi-Line is twisted, I would (as you may have already done?) address as follows - pls excuse some of the detailing - purely FAOD:

1- power off the CDX2 and remove the Hi-Line. If you have an old Naim lavender version cable (in the CDX2’s box as original supply?) I’d try this in substitution at this point.

…hopefully it’s not the CDX2. I don’t think cabling when ‘live’ would have done damage - I’ve seen dealers do this a lot.
2- check the signal output on the rear of the CDX2 is set to DIN/RCA
3- check the Hi-Line pins at either end - I have seen a Hi-Line with a bent pin. By heavy-handedness I once pulled on the flexible plastic covering and revealed some of the terminal soldering…lesson learned. Hi-Lines can be delicate flowers.
4- Give the Hi-Line a good massage to get the 2 sheathed cables parallel and as ‘relaxed’ as possible.
5- Check the Powerline is fully home and engage the DIN locking rings for avoidance of doubt

When I rebuild I cable-up as I go, as I find this avoids (as best possible) awkward twisting of cables.

6- Re-insert the Hi-Line which is directional (*light coloured band at terminal end goes to source) and power up the CDX2 etc,.

*the cable marking is way too subtle for some - I’ve put a ring of tape around my source-end.

…if not resolved, dial the dealer time.

Thanks for all this.

Relaxation of cables; cleaning of sockets; checking integrity of plugs etc. was all done when I powered down; rebuilt the shelving; swapped brains and brawn etc Powerline was tend to fuse their boxes if not properly inserted so i think I’m fine on that one too.

I’ve no reason to think that the signal output would somehow change to DIN/RCA and I’m also not convinced it would kill the bass but worth checking I suppose and easy enough to do.

I’m going to pull the speaker cables out next and unscrew the Naim boxes as suggested by @Richard.Dane. As all this stemmed from kicking the speaker cables pre-Christmas that strikes me as a more likely culprit than anything else albeit I’ve seen no evidence there could be an issue.

Nevertheless as a last resort I was going to put the lavender IC back in and see what happens.

Mike - any chance you can take a couple of pictures of the connections to the back of the 202 / Hicap / 200. IIRC didn’t you have an issue a year or so back with a misconnection on the 202 (powering it both from the Hicap and the 200). Just wondering if there may be an issue here

PS - apologies if that wasn’t you but the system sounds familiar.