Help please!
For the past few months I have been using a Naim Core (just serviced by Naim) with a brand new main board and drive in it. Latest software, installed at the factory. A new SSD 3 months ago. My iPad is up to date and runs the latest version of the Naim app.
My Naim App on my iPad and the Core have been working fine for months.

This morning, when I tried to use it…(no network changes or other faults etc). it has lost maybe a third of the album thumbnails. It seems as though it is the ones I have had to edit, (the user-edited ones) which have been fine for all these past few months, which have disappeared.

Over the past few months, I have had to edit quite a few of the covers as the automatically selected ones have often been wrong or unavailable (due to me having a heady, eclectic mix of popular cds with a lot of pretty unknown ones…)

And is there any way of getting these back to the user edited covers that I had saved, without manually editing covers again? I know that the user edited ones are still saved in the correct place, because I can see them if I search for my Core and its file contents on my Macbook Pro. But the App seems to have decided not to use them. All the text-based edits I have made to my listings are still being used properly by the app, and are fine.
Help is desperately needed please, because otherwise, if the system is not reliable, I may end up becoming a very disgruntled ex-Naim user.

Hi not clear to me. Has it just been returned by Naim, and now cannot find the artwork, or has it been returned, working OK for a few months and now suddenly playing up? Have you tried rebooting with a full power off and on, if that fails turn router, switch Core off and then reboot router, switch, then Core?
Either way i would give Naim a call via your dealer, if the above fails to work.

As Gazza says try full power-off restart of the Core. Then restart the app. It should sort the issue out, but a router restart is the next thing to try.

The Core isn’t unreliable in regard to user edits, but equally this issue isn’t unknown, but should be solvable as above.

Thanks for the advice, David & Gazza.
I have followed your instructions, but to no avail.
The issue is still there. See the screenshot from my iPad…

Just to clarify, Gazza…
I bought this Core earlier in the year, and it went back to Naim (without the SSD) for rectification of a noisy drive.
Naim actually decided that they needed to replace the main board as well as the drive, so it is now a virtually new machine.
After I received it back from Naim, I decided to start afresh, so I cleared and reformatted the SSD, fitted it, let the Naim app do its thing installing the SSD, and started to use it.
It has been fine until now.
Then, all of a sudden this morning, when I started the App, a load of my edited cover art was missing. All my text based edits, however, are still there. All my CDs are index-numbered on my storage shelves, so I precede the name of each CD with its reference number. If I borrow a CD from a friend and rip it, instead of a number, its title is preceded with a hash symbol.

Anyhow, as I said previously, the issue has not rectified itself, despite following your instructions. What can I do next please? 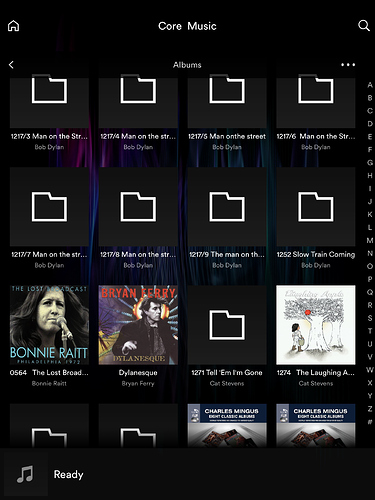 Then I found another thread and tried the suggestion in that!

I quote: “Clear image cache” and “Rebuild music database” in “Other settings” tab.

Actually in the latest version of the App there is NO ‘Rebuild’ option.

And it was a bit scary ‘Clearing the Image Cache’.I thought I would lose EVERYTHING.

However,when I did it, everything returned INCLUDING my User Edited Covers.

I DO wish Naim would consider putting a well organised and properly documented FAQ for advice and potential issues with each of their products on their website.

There is still a Rebuild database option, but you have to be on the UnitiCore part of the app, not a streamer part of the app. It’s in “Other settings” This is the IOS app in my iPhone XS.

Glad you sorted it anyway.