Finally, my better half has allowed me to get my old beast out of the attic and into the Living Room. (20 years its been in there). Blowing the dust off a 160 and 12s and DIY power supply made by my Dad and his mate many many moons ago. I decided to get them recapped by an unauthorised repairer (nice work fellas), being the novice that I am I thought I didnt need the power supply for the Pre-amp (thinking it was only required to make the system sound better). Off I go and try and connect the amp and pre amp together 4 pin on amp to wait a minute 5 pin on the pre amp!!, So alas I had to get the big silver box that is the power supply and connect everything together. Classic Naim Chrome Amp and Pre Amp and a huge Silver box in between, other Half is not happy as it ruins the look… Therefore, apart from spraying the silver box to Black is there any smart ideas of how I can power the preamp?

Would anybody be able to help me?

For what ever reason, I have a 12s with a 5pin connector (was a 4pin). I have just acquired a Chrome Bumper SNAPS to match the amp and pre amp, but yes you’ve guessed it, it has a 4 pin connectors on the back so I need a 4 to 5 cable or I need to find a 4 pin socket which is ever harder to trace than the cable.

Do you have a picture of the back panel of your NAC12? It sounds like it has been modified in some way - probably to dual rail spec. If so, you should still have a suitable DIN4 to power via single rail supply. All you’ll need is a link plug to bridge the DIN5. Of course, if modified then anything is possible, and maybe the DIN4 was omitted, in which case, you’ll need a dual rail power supply, such as a Hicap. FWIW, the SNAPS can be dual-railed, although as it’s not an official Naim modification, we can’t discuss it here.

I have been told that it is dual railed (have no idea what that actually means) and that all holes are wired up. Should of taken a photo of it when I took the lid off. So the question is do I then get the SNAPS upgraded to a dual rail and then its just a matter of get a 5 to 5 SNAIC cable from Flashback or other similar shops. Dont see the point in having the pre-amp down graded if it makes a difference that is. Either way I need to change something, I’m too old for this

I don’t think they supply genuine SNAICs, and I would strongly advise against using anything but a genuine SNAIC (see the FAQ on this). For that you’ll need to buy from a Naim dealer or secondhand via the usual avenues.

Do you have a picture of the back panel on the NAC12?

Its defo been modified, 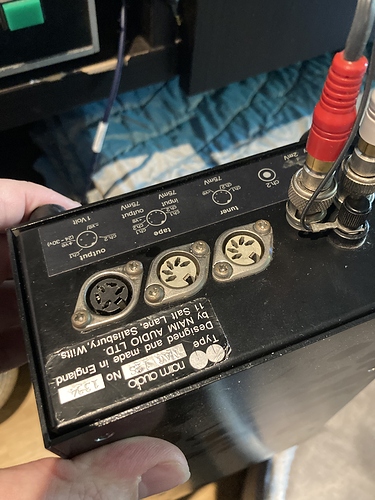 OK, so there’s no single rail DIN4 - FWIW, the earlier NAC12s which had the phono input on a DIN lended themselves more readily to offering both a DIN5 (Dual-rail) and DIN4 (Single rail) socket as you could fit phonos or BNCs for the phono input and then use the spare DIN cutout for the extra DIN5.

Ive opened the 12s and it has wires on all the pins, and would have no idea how to turn it back to a 4 pin socket… I’m stuck and feel this is going to cost a whole load of wonga I dont really have as the wife wants a new bathroom.

If the dual rail mod was done well then there’s no reason to change it. Of course beyond that, the discussion falls outside of forum AUP.

I have been told my my dad the 12s isnt a 12s but a 32.5 in a 12s case, and the 5pin din is orginal and as supplied by Naim. So it isn’t dual railed nor has it been modified in any way. So therefore going back to my original question, how on earth do i connect the Pre-amp to the snaps? looking for a 4 to 5 pin SNIAC cable does such a beast exist, if so how much and where do I get one? will it cost me the earth?

I’d stick it all back in the loft mate, or it will end up like the graded national lockdown… in tiers.

(Apologies, no help to the op)

How did that happen?!

In short - it can’t, the main PCB from a 32 wouldn’t physically fit in a 12 case. Also, the 32 had four inputs.
I suspect the performance of a dual rail 12 was compared to that of a 32 & something got lost in translation!

There is a SNAIC5-4 (for allowing a dual-rail PSU to power a single rail pre-amp) but no SNAIC4-5.

As NeilS points out above, a NAC32 PCB is much too big for a NAC12 case.

You will need a dual-rail power supply; either a dual railed SNAPS, Flatcap, or HICAP.

. From what I’ve seen the 5 pin has two 2x24V pins? so could I then in theory connect the two together? after all its the PSU thats doing the work not the pre-amp. So confusing and losing the will to live.

Sorry to be a complete potatoe, what would happen if you connected a 5-4 around the wrong way so it became a 4-5 :-D.

At a guess, you would only be powering one of the two rails, so it won’t work.

Could you substitute some of the 32.5 cards for the original 12 cards ?

YOu are asking the wrong person

Will be taking the lid off and taking some photos tomorrow perhaps that will shed some light on things.