Im have been a big ‘Dan’ fan forever so they really couldnt do much wrong and yes most of their stuff was top quality so maybe having a high end system doesnt make a big difference and also its just the music you like that is important no one else’s
Im still getting used to my ‘new’ Naim NAIT XS2 and wondering how i put up with my old Audiolab for so long compared to the Naim it was like listening to music in a fog.

‘Missing’ another classic Every Thing But The Girl what a voice she had too
loads of other artists you could name :The Beautiful South,Lisa Stansfield,Melody Gardot,Claire Martin Ms Krall of course not to mention Alison Kruass…and on and on!

The Blind Boys of Alabama’s “Spirit of the Century” album opens with a few bars of acoustic base, followed by what sounds like the voice of God singing, “Jesus Gonna Be Here…” It’s just the thing to play for people who were told that CD doesn’t have much bass.

I want timbre and precision . I want the singer to be in the room with me

Tracey Thorn has such a wonderful voice and recorded with so many people, getting better and better. This is what differentiates her from Diana Krall, who started out good but seems to have got worse and worse. Such promise, wasted.

Not complete tracks every time, though, I often just jumped to a timecode to check if I hear what I know should be there.

I don’t get you guys… Real recorded acoustic music - classical - will give you the biggest test that any hifi system can ever have and is of the highest quality sound and content wise there is …period. And it will feed the inner soul if you are a music lover not a sound lover. There is a massive difference here.

I have little idea how classical music is supposed to sound in detail and in real life because I rarely listen to it. In fact I found the sound in the concerts that I attended a bit underwhelming. Because I don’t listen to it, I also don’t care whether my system reproduces it well, and it would be worthless if the system didn’t reproduce the music well that I do listen to. In addition, I can’t judge the emotional effect classical music through a particular system has on me because it’s little at the best of times.

Any post that includes the word ‘period’ cannot be trusted. It’s that I’m right and you are wrong thing, and that’s never good. That said, having heard the marvellous Chiaroscuro Quartet on numerous occasions it’s always a good test to se if the recorded sound is remotely like the real thing. As to piano, it takes a good setup to make a piano sound like a piano. Having a real piano at home is a very good benchmark.

I remember the old days when i used to reach for the volume control because certain parts in a recording were just too unbearable, even trying to avoid certain discs, which really took the fun out of my whole HiFi experience.

Fortunately those days for me are well and truly gone. Whether that’s because modern HiFi is more forgiving, or because the technology is just so much better, i don’t really know. It’s just great to play all genres of music, whether badly recorded discs or not and be able to really enjoy them like never before, well that has got to be a good thing all round in my book.

Why would I use music I rarely listen to, to judge how a system sounds to me. Doesn’t matter what it sounds like using classical if it’s not my primary source of music . I care about how it sounds with the music I love and know and they give me all the same stuff you obviously get from classical.

Away from the standards,
Ronnie Aldrich - All Time Jazz Hits, I am reasonably sure that the recording either was, or imitates live with the soloist moving forward to take their part. There is a kick drum that kicks.
Steeleye Span - Parcel of Rogues, artificial reverb? Alison Gross can sound congested, violins and fuzz box convey the nasty witch, but has clarity (or not if the system is not up to it). The Bold Poachers has a relatively quiet, ethereal double tracked vocal that is not always easy to hear. Robbery With Violins beautifully articulate bass.
Black Uhuru - Anthem, Botanical Roots, the fast bass can be muddled if the amp is not controlling the speakers.
Benjamin Hudson et al, Arvo Part - Spiegel im Spiegel, slow simple, listen for the whole sound of the piano, the strike of the hammers, the woody tone and most of all the decay of the notes.

What’s really the motivation for this thread? Showing off your system to others, or checking things out when you make changes to your system.

As for the former, I have nothing. When I have guests I try to play stuff they would like…i.e. we use the system to listen to music, we don’t use music to listen to the system.

As for the latter, when I make changes to my system, I have various albums I like to play to check if things sound right (and hopefully better). They include old classical records, some really nice ECM albums from the 70s/80s and some boutique jazz reissues of the recent decade or two. A good set of records for checking the full range of a system is the Harmonia Mundi France albums by the spanish group Atrium Musicae de Madrid. Albums include La Folia de la Spania, Tarentulle, and Villancicos. I have the originals and the Speakers Corner reissues. The originals sound better and are worth seeking out. Also on BIS Records is la Spagna, which has also been reissued. Again, the original sound better, IMO They have a bit of everything for checking the health of a system, and are great fun to play.

Oh dear im beginning to wish i hadnt started this thread!
Only wanted to say what music you play to demonstrate your system we dont all
like the same music so just say vive le difference!

Showing off your system to others, or checking things out when you make changes to your system.

I’m guilty (if that’s the right word) of both. I suppose I even like to show off my system to myself sometimes, but since that just involves me sitting, listening and thinking ‘Gosh that sounds good, I love this album’ or similar, am I ‘listening to the music’ or ‘listening to my system’? I’m not sure I know. I’m not sure I care. Enjoyment is enjoyment.

Are you talking about music to demonstrate how good your system can sound (to whom?), or for use when auditioning other kit, such as for possible upgrading? The choice might not be the same…

Edit: having read the rest of the thread it appears to be the former. Not something I ever do, and not sure why I would, however in the odd event of someone wanting to hear“what it can do”, I guess it would depend on what is of interest to said person, but would probably good to include a variety of different things. By way of example, if they like classical music, Grieg’s incidental music to Ibsen’s Peer Gynt (not his Peer Gynt suites) may be a good showpiece. I have two versions, both including vocals: 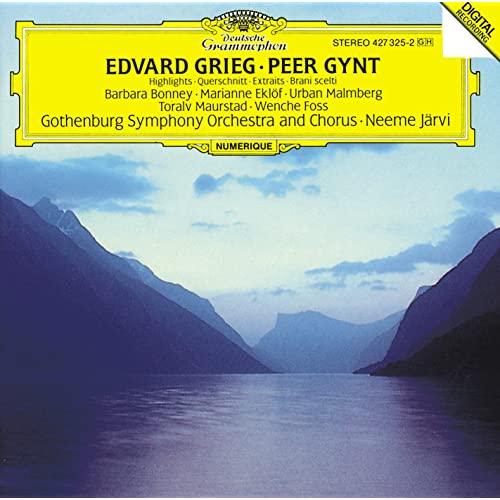 Spot Mark i like to show off my system but also just happy to be in the Naim world
having just re-purchased an NOS Nait XS2.
I started this thread what with all the replies wish i hadnt!

I nice sounding cd i have is Hell or High Water by Sara K, this is a Hybrid Multichannel cd, ive only listen to the redbook layer and is a lovely recording to test your system, and from a very talent singer and good songs also.There is a mention of Bower & Wilkins on the back of the cd, the recording used B & W Nautilus 801 d for monitoring.