Went to see Bosch’s exhibition at Palazzo Reale, Milan today.It was a Christmas’s present from SWMBO.I’m completely ecstatic.Some of his masterpieces are for the very first time in Italy.Some of his pictorial details seem to be a pic taken with a professional full frame camera.Astounding.

Welcome in the world of the old Dutch masters! I very much understand the feeling. Been to musea and after an hour I’m just completely exhausted of all the impressions.

I had what may have been a similar experience when I went to see Matthias Gruenewald’s Isenheimer Altarpiece in Colmar, Alsace.

I knew nothing of what to expect, and I was completely bowled over by it.

It may have had a similar effect on Paul Hindemith, whose opera Mathis der Maler is based on the artist’s life.

Yep, seeing a painting “in the flesh” always has more impact than seeing reproductions in a book or on TV. There’s one exception to the rule, and that’s the Mona Lisa, which you can’t see in person in the Louvre as the crowds are always too deep. You might as well look at a photo.

But seeing Leonardo’s Last Supper, Giotto’s Scrovegni Chapel in Padua, Michaelangelo’s Sistine Chapel, a big Pollock, Picasso’s Guernica or a Rembrandt or Moroni portrait in situ is a real privelege.

@Fabio1, shouldn’t the thread title be Hieronymus Bosch? I checked and while he was originally indeed called Jheronimus, that was with the surname van Akin, so shouldn’t the thread name be one or other not the half and half? I’m sure Richard Dane will change it on request if you agree and can’t yourself.

My only awareness of HB was from the album cover of Deep Purple’s eponymous third album. He clearly had a tortured mind!

My only awareness of HB was from the album cover of Deep Purple’s eponymous third album.

And there was I thinking he was actually a fictional Homicide detective from Los Angeles who had a fine collection of jazz records…….

Hin-da-mit as he was called by some colleagues. I like Hindemits works because it’s well written, modern but still accessible for those who want.

Groeningemuseum in Bruges has several fantastic Bosch, as well as some great Flemish masters. Not a huge number but beautifully presented and described.

I have read a monograph about Bosch (about whom very little is actually known) and the religious context of his wilder fantasies. Fascinating, and perhaps not quite as mad as they appear to modern eyes. Still fairly crazy mind you!

Whilst at the aforementioned museum pop across the yard to the Frank Brangwyn collection. We have a Brangwyn etching at home. He was a prolific and very talented artist.

I saw the Bosch exhibition in 's-Hertogenbosch - I think this was a year before the Covid crisis - this was wonderful of course. Bruges doesn’t have that many of Bosch’s paintings (one?), and attribution is disputed, I believe. Ghent has a couple, but by far the largest single collection is in Madrid…

I’d love to see that show he’s definitely one of the most interesting and original artists of that period.

One of my most profound experiences also took place in the museum at Colmar. After having listened to recordings of it for years, I finally got to play the Ruckers harpsichord there, made in 1624. It is one of the finest antique instruments, very well preserved and not much altered, having been in the possession of the family of the Marquis de Sade for many years.

Look on Qobuz for wonderful recordings of this harpsichord, played by Blandine Verlet and engineered by Michel Bernstein, a genius at recording the instrument.
The best recordings are of Louis Couperin and Johann Jacob Froberger.

Colmar is a lovely place. I suspect that it’s much better known to Germans than to Brits, because the French/German borders have changed so much in the last few hundred years (and no doubt longer). It noticeable if you sit in a café or restaurant in Alsace that even generations of the same family will mix and match languages and cultures.

Lovely, old buildings and restaurants, interesting foods, and characteristic, unique grape varieties used in their wines. (I saw Rick Stein on TV recently, travelling through Alsace in a beaten up old 2CV or some such, enjoying the very simple food and wine.) It’s a lovely place, which I would love to re-visit some day.

I knew nothing of the musical instruments, so there’s something straight away.

I agree with the TO, the exhibition in Milan is so nice. As we all are passionate about music, I assume, you might like this link which refers to a music sheet appearing…on the butts of one of the million carachters in the Garden of Earthly Delights (too bad it’s not displayed in the Milan exhibition, but, hey, Madrid is always worth a visit!). 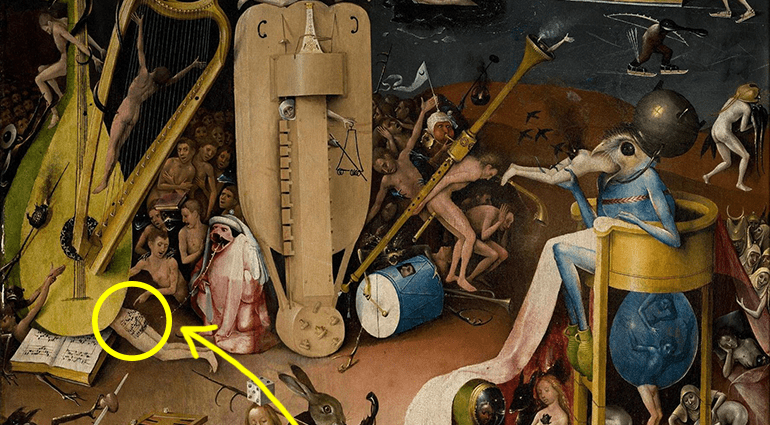 The famous painter Bosch left some musical notes in one of his detailed paintings, he left them on a man's buttocks. Read more...

See the guy had a great sense of humour as well as a great painter.

Thank you Alebowski,
I listened to the music on your link.On the first one I would have expected something more "dramatic"and in my opinion it looks like some Genesis’s piece of music.I think the last one is more “Hellish”.
Have you been to Palazzo Reale?
Thanks for posting.

Yes I have! Beautiful exhibition