How could I make this a better picture 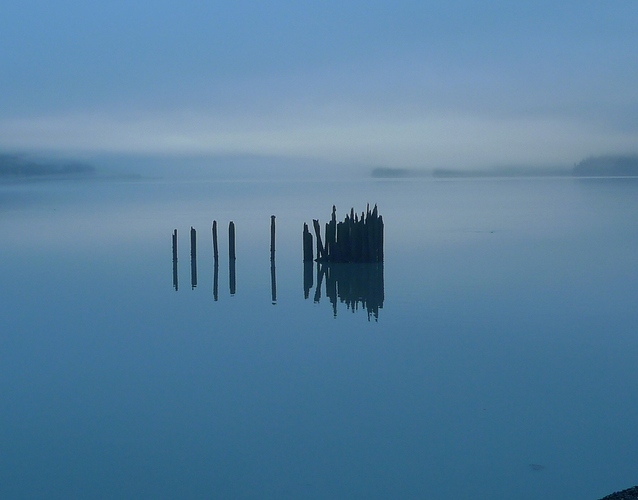 Thread based on a suggestion by Catswhiskers.

Just a starter for 10, but hopefully Gandalf will be along shortly with his entire photo portfolio 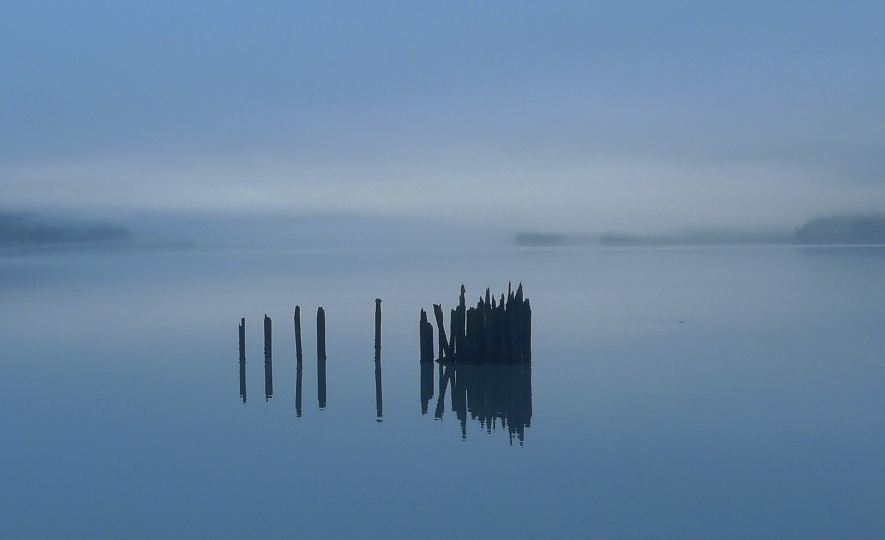 Erm, I guess it depends how you want it to look. I’d change the title though, ‘Misty Piles’ sounds like a very unfortunate condition… 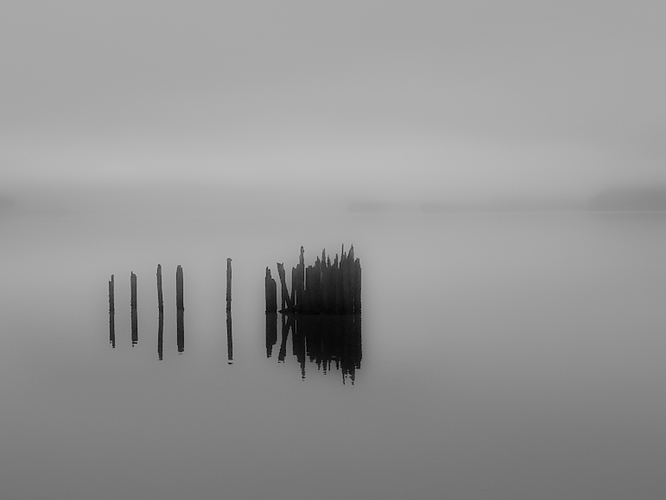 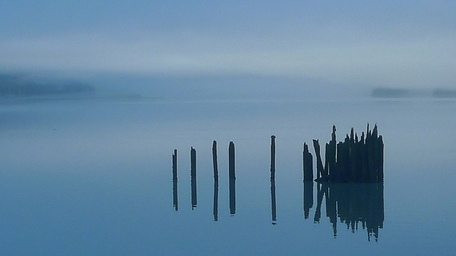 Usually when taking a photo I use the rule of thirds which is never put an object in the center. So for example I cropped the photo into a 16:9 format and placed the pilings into the bottom/right third of the photo.

One of many things you can do and the intent is to draw the viewers eye to the object you are highlighting in the image.

Going to try that again!

As to every rule there are always exceptions and a centred object without any peripheral distractions will always be the main focus of attention. Maybe just me… 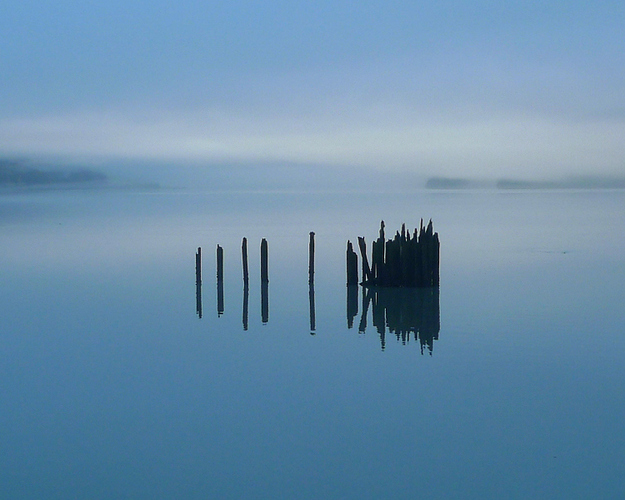 Interesting thread. I must admit that on the whole I like Don’s original best. The piles aren’t really the subject of the picture. As I see it, the subject is the water and the way it merges into the sky on the horizon. The piles add interest and a reference point for scale, so it’s good that they are there but I don’t feel the need to place them critically, nor to make them larger. You lose some of the sense of vastness if you pull the piles nearer to the viewer.

In the different crops the interest on the horizon is to quite an extent lost and that’s why I prefer the original. Without prompting when I asked my wife to say which she preferred, she came up with the same preference.

So it’s “Nice photo Don and don’t mess with it” from us!

I would move the piles slightly to the right (by cropping) and get rid of that little dark triangle in the bottom right.

I like the original picture, but the tiny bit of dark something (wood, boat?) in the bottom right hand corner is a distraction and so a minimal crop to remove this works best.

However, I also like Seakayaker’s rule of thirds crop.

Yes I agree on removing the dark triangle (which I hadn’t noticed as it’s under the enlarge photo icon on my iPhone). But I would do that by cropping the bottom, not the right hand edge because of losing some of the detail on the right hand side of the horizon and that would mean it was unbalanced compared to the left.
Best

Just to say that I cropped mine deliberately centred so people could see the difference from what they had posted, not that I thought it was best! The other thing I did was slightly rotate the ‘horizon line’.

It’s brave of you to ask for opinions Don; here’s mine.

The picture is quite dull. The colour palette is centred on a not very pleasing blue with reflective hues that add to the dullness. Maybe that was the intent.

My primary dislike of it is that it’s such a cliche, a dreamy seascape with mystical cloudy background and an object that breaks up the foreground to give it a sense of scale. Or whatever. It’s exactly the sort of picture that’s easy to skip past in the ‘Look At My Photos Aren’t I Clever’ thread because of what it represents; somebody imagining that a dull unimaginitave but mainly cliched photo is worth sharing.

How could it be improved? Personally I’d be ok with copy n pasting into it a couple of Boticelli-type women looking coquettishly over their shoulders at me the viewer.

ATB Don, you did ask.

I suspect you will get loads of different answers about how to improve it, some people will like it and some won’t.
My resonse is a question. What, if anything, could you have done differently to get a result that pleases you more?

Reminds me of the cover of Kristin Hersh’s latest lp:
http://dis.images.s3.amazonaws.com/105875.jpeg

Thank you for all the responses.

It is interesting that most recommendations involve some sort of cropping. Again, these were mostly to enhance the viewer’s perception of what would constitute a “nice” scene. And most of us seem to accept that different people have different points of view (I didn’t really intend that pun !)

Recommendations regarding colour balance, contrast or the likes of sharpening were mostly absent.

I posted a modified version of that picture a few years ago in the “Nice photos” thread because it reminds me of the circumstances during which it was taken. I modified it by cropping and rotating slightly to get the horizon more or less level and I adjusted the brightness and contrast a little. I also had to “thin-out ?” the pixcel count to allow it to be stored on Flickr.

How close the original photo (this thread) or the adjusted version (previous Forum) was to the real visual scene, I don’t know, but the photo does stir the memory in a similar way so there must be some emotional likeness.

Anyway, the purpose of the thread wasn’t so much to enhance (or tweak) one specific (and rather mediocre) photo of mine (I am, however, grateful for the comments). It was to encourage others to post theirs and for the more enlightened photographers on the Forum to provide guidance on improving photos in general, both before pressing the button and afterwards in the computer. I’m sure many of us have a lot to learn and will be very grateful for advice, no matter how harsh !!!

Hmm. TBH if you look at it that way most photographs are cliches - indeed, for many years most paintings were too. As for dull - that, surely, is in the mind of the viewer? It’s a competent photo, better than the run-of-the-mill snap that most people take.
It is really difficult to take (or imagine) a photograph that is unlike any other. Even Ansel Adams could be described as cliched, I suppose - but that doesn’t make them any less superb. The problem is that most photographs are of real things, and most real things/views/events have already been photographed/painted.
Which, AIUI, is why the impressionism, pointilism, cubism and all the other -isms plus abstract etc. - it was felt that it was all done before (plus photography, to an extent, degraded some of painting’s reason d’etre. So yes, lots of people have taken lots of photos of misty water scenes with something in the mid-field. Of its type, this is a reasonable photograph.

I guess having suggested that I should give you a go. The attached is as taken and was a grab shot between other people.
I rarely do more than crop, but here, are there options at the taking stage as well as post processing? What would you do? 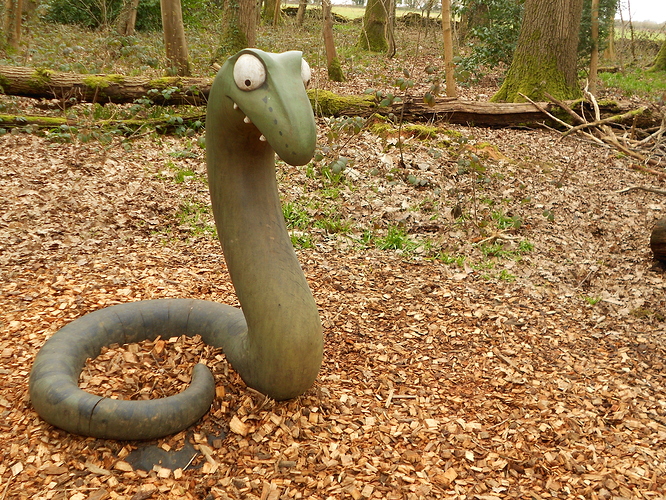 I would have used a longer lens, to keep well away from it!
Best
David 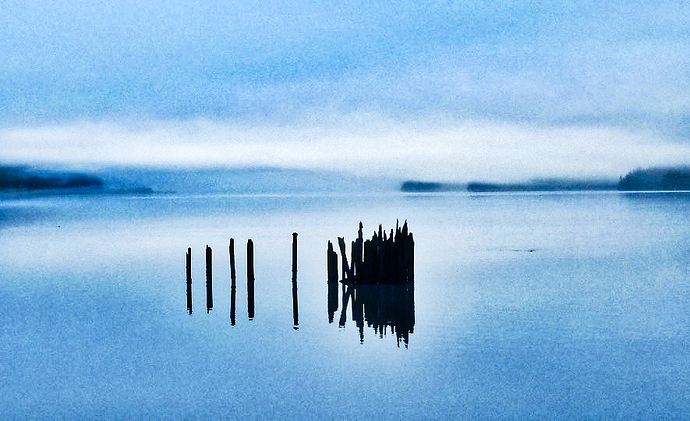 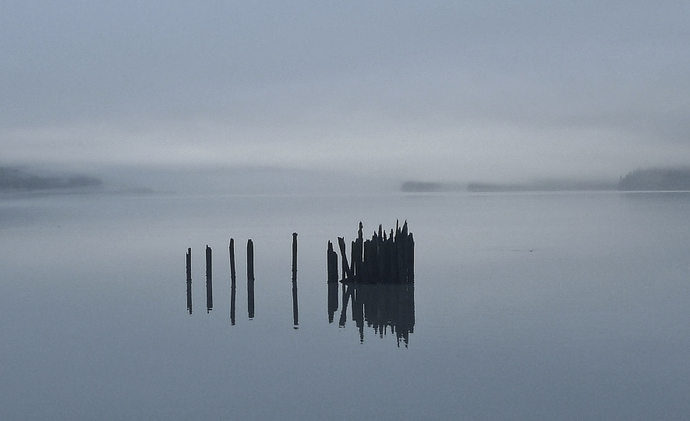 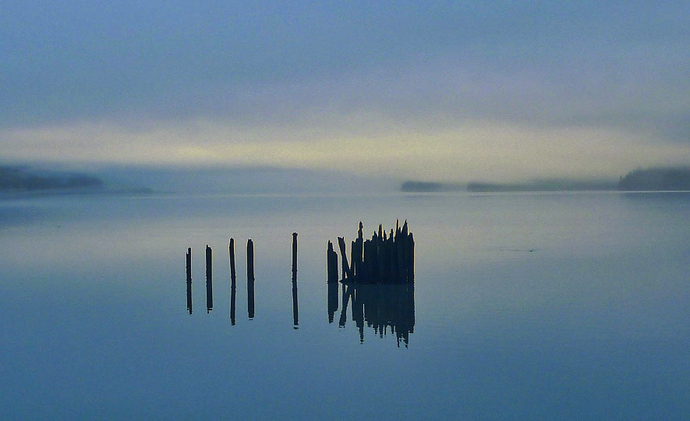 4 different ways to treat the pic but it’s what you feel the pic says to you personally that counts.