How Do You Choose Your Music?

I am continually amazed at the size of some members album collections. Until I joined the forum &, in one thread actually asked the question, I was under the impression that my total vinyl, CD & downloads collection of approx. 1000 albums was quite large. I have since re-evaluated & would now describe it as ‘quite small’!

So my question is this:-
All bar perhaps half a dozen of my albums were carefully considered purchases & even now I am able to afford the same amount of purchases a month without too much difficulty, I just can’t bring myself to purchasing new music where I have no/little idea of what I am buying.

Those of you with vast collections of several thousand & more albums can’t possibly have much idea of much of what you are buying before you actually do buy it. So, how do you decide what to buy?

One of the streaming services, if you have a subscription, of course. Alternatively many albums can be found on YouTube or even the artist’s own website. Some online shops or labels will allow sampling of some tracks, maybe 30 seconds or so.

I presume that is now the modern way but a collection of many thousand albums would have been built up long before the advent of streaming in the majority of cases.

Often I specifically buy stuff I never heard. Just to try them out. The stuff I know and like, I already own. I enjoy this more than streaming the files or checking out youtube. It is more enjoyable to get something by chance that will lead down a rabbit hole.

There will rarely be pease music I really can not stand. I don’t stream anymore but own my own digital files. We leaned that whole countries can be excluded from streaming services if somebody decides so. Files available on Streaming can suddenly and unexpectedly change versions. Having the files locally can be extra work, but is more tengible.

I tried vinyl and cd, but can not bring myself to stand up and put cd or vinyl on, so still don’t own this kind of things. Just today bought 5 cds. 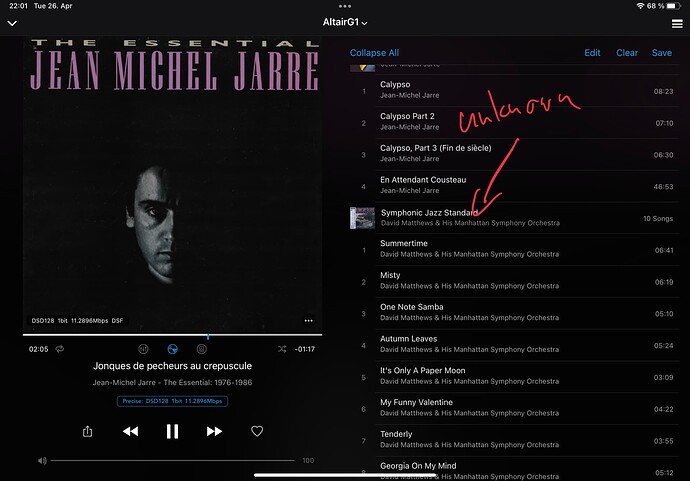 Usually put couple of albums in the queue and chill. Don’t skip around and things.

I read. A lot. Critics, once you read them enough to understand their specific biases, add massive value. So, music magazines, newspaper reviews, ho fi mag miscues reviews. Streaming then let’s me reflect on the difference between what written and what I hear.

It varies with me. If I have prior releases from an artist there is a good chance I would buy the latest one.
Years ago before internet I have been known to buy albums purely based on the cover (Roxy Music - For Your Pleasure) being an example.
Nowadays anything that sound interesting I stream a bit and take it from there.
Oh and a few days ago I was in a local record store and the owner said to me “You like all that 60’s style Psych kinda stuff. You should try this” He pulled out the album The Carrier by Large Plants. He was right I really like it!!

If there is a particular song I like, I will search on Tidal for all versions of it by other artists, and will often find a new artist that I then latch onto

I could have written that myself!

If I carefully considered every purchase I would have missed some wonderful and amazing music yes I have a few records I may not listen to and eventually sell one of which Charlie Cunningham- Lines now sells for in excess of £150 when I paid £8.

I enjoy collecting and searching for records it’s my hobby careful consideration rarely if ever comes into it.

careful consideration rarely if ever comes into it.

Never a truer word spoken when it comes to vinyl and CD collection, hoarding, accumulation!

I’m surrounded by the evidence despite culling thousands of both formats during the last two years or so.

Having a close friend who owns a record shop just makes it even harder/easier. . . to resist/accept the mania.

I think it is a question of whether someone is a collector (of recordings, or disks, etc), or only buys to listen (again and again, otherwise why not just stream online?), how discerning they are, how wide their musical taste, maybe how much time they have (both to seek out music and to play it if they buy to play), and of course how much disposable income they have.

In these regards I’m a bit of an “intersectionist”, as in, I’m a recidivist collector, I listen again and again to many records, (I’m increasingly disinclined to stream), I like a fair range of music, and I’m a part time freelancer with some occasional spare cash to throw at the thing.