How is your BMW reliability experience?

There you have it, a dedicated thread about car reliability experience (and go from there

), doesn’t have to be limited to BMW, but at least please keep it to land vehicles, please!

How many defective 552 units is Naim going to send me? Padded Cell

I have a new BMW 535i Touring but to be honest do you know the car I delight in driving the most - yes, the current Ford Fiesta 1.0 Titanium. Only 3 cylinders too! Holds the road well and is nicely screwed together.

We handed back the 4 series due to covid and the pointlessness of having a nice car sat doing nothing. As my youngest is on the cusp of driving, we bought a Picanto with a 1.0l 3 cylinder engine as a bit of a pool car.

Downsizing has never been more fun. 100bhp and 1000kg. It reminds me of all those cars I owned as a (much!) younger man. Better equipped then the 4 series too.

I’m relearning the art of momentum

Don’t have one. Wouldn’t be seen in one. Discuss.

Absolutely marvellous at doing what it’s supposed to do, i.e. a painless 400 mile round trip, but the most soulless car I’ve ever driven. And being a black, diesel estate it’s like driving a cancer distributing hearse which, even in sport mode, takes about half an hour to do anything after pressing your right foot down. Hate it.

Our first ever BMW is an electric i3. Whilst it has been reliable over the two years so far (let’s face it they don’t have many moving parts) the interior fabrics and plastics are really quite poor. Seat fabric wear is apparent after 14k miles for example. I am also still trying to work out how they can charge so much to service it when they do so little.

I have had a Volvo V60 estate for over 5 years, old style for 4 years and a new one recently. Completely faultless ownership experience, and better materials than BMW in my view.

Before the i3 my wife’s car was a Honda for over 25 years (HRV, Jazz, Civic, CRZ). In all that time we did not make a single unscheduled return to a dealer and never had a single glitch I can recall. Fabulous engineering.

My own cars (bought new) have included a Lotus Elise presumably built on a late Friday afternoon by a trainee when no-one was watching and two Alfa Romeo’s in the 90’s that unfortunately reinforced the old Alfa clichés with a succession of faults from new and over time. At least the Lotus dealer was helpful and a bit embarrassed when things needed sorting. Alfa just shrugged. I do hope they have improved.

Lotus…Lots Of Trouble Usually Serious .
My daughter is a BMW fan …company vehicle changed every three years .
Her experience is that the cars have been faultless , servicing less so .
Worst example was car delivered back to her office with finger tight wheel nuts !

Now you are scaring me. I don’t recall ever double checked wheel nuts after my car come back from service.

As ever, reliability will depend on the exact model, age and mileage, and luck.

As an example, the earlier 2.0 diseasel engines had poor timing chains that could let go with just 20k miles of use. No problem, you’d think, just get it changed when it makes noises… it’s at the back of the engine… and sometimes let’s go with little warning.
All sorted now, I’ve heard, but there were stories of long drawn out fights with BMW over who pays.

Dealerships and servicing? Pure luck. Our nearest dealership has changed hands, so might be better than the fraudulent, incompetent liars that were there before. (Tyres inflated during a service to 5 bar, anyone?)

I suppose when it comes down to it, all dealerships and cars can be bad, so it’s up to the customer to investigate locally.

No problems with our 2007 325i Touring. Back when they still used 6
cylinders so a nice drive too, even though it does less than 2000 miles a year! I was well advised to avoid the next version of the i BMWs (late 2007 to 2012, I think) as they can develop issues with the fuel injection which costs an arm and a leg to fix.

We’ll run this for a couple more years then go electric or hybrid…probably.

The dog-wagon has one of the last of the M57 3 Litre sixes. It now has over 160,000 miles on the clock and no major issues so far and feels just as strong as it did when in its youth. The engineers at Munich Legends reckon that with proper maintenance and a mechanically sympathetic driver it could easily do half a million miles or more. 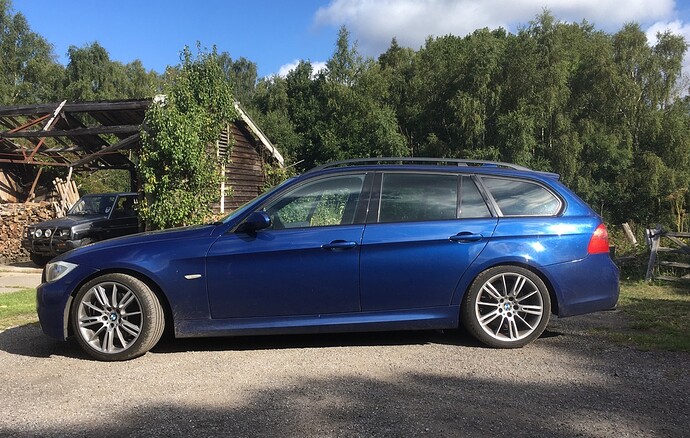 Mini driver here, switched to Mini after my company downsized me from their employment .

Had been a 3 series driver before, so with BMW and Minis I’ve had 4 new cars off BMW production lines, they’ve been fun to drive - but one too many issues .*

Decided anything but Mini next time , I took my car in for service - 5 years old, 45,000 on the clock - very carefully driven. Walked out with bills and estimates for £1500 .

The main dealer refused to reply to letters or emails

Took it to an independent dealer who said there was nothing wrong with the part in question , only normal wear and tear for a car of that age.

So it’s a Skoda, Hyundai or just a little Peugeot next time

A few know-it-all’s at work have bought Skodas, declaring every other make a rip-off/con/small.

All have really annoying trim issues that various dealers can’t fix. Imagine opening the driver’s door and having to hold trim in place while you sit down and close the door again! Dealer in Bury St Ed’s completely ignored me, stood in their showroom next to a Superb. Since then, I’ve realised that the Superb is a mega fugly from most angles.

Have had several Skodas , Yetis and current Octavia .
No problems with trim or anything else .
Just put fuel in and drive .
Current 1.5 TSI Estate returns nearly 60mpg .
How boring !

My second BMW had a recall, because one page in the uk manual was accidentally left in German! LOL

Oh and an issue with the software linked to the electric handbrake system meant that under certain undefined circumstances the handbrake could lead to a flat battery. Hey ho!

On my second 320i, reaching for wood, faultless.

Just trying to make it clear that one person’s great experience being used as a recommendation can lead to someone else having to go on an anger management course.

My advice is usually to buy a used car of a make that has a well respected indy specialist locally. Even if the car is within warranty. But hey, over the last five to ten years it seems like most cars sold new have been under some sort of lease or rental scheme.

I have had a few bmw estates over the years - 330d; 530d; 535d. The engine in the 535d was superb. The only let down experienced from the three that I can recall was a component in the a/c which failed during a drive to Wales on a very warm summer’s day. The problem was known and subject to a recall however, bmw dealt with this during scheduled service bookings. A little bad luck on my part! Currently I have a large lexus which I have owned for nearly 4 years. I’m doing very little mileage (esp with the virus) and have impression that I’ll fail long before the lexus!

I meant to say also that my experience over the years with various brands is that if you can find a well run dealer, particularly in the servicing area, I try to stick with them. People laughed at me driving to Worcester for a service but this was a reflection of their performance compared with previous experience with one or two London dealers. That’s a universal observation, not limited to bmw.

Daily drive was a 320d Touring of a similar generation and colour to Richards, which I had for ages and put 140,000+ miles on it. Excellent motor. I swapped it for an E class merc as I needed more space which was faultless until we moved abroad.

Fun drive was a Lotus Elise, I had it for years and years, did >40,000 miles in it, including 100’s of trackdays and several seasons of racing. But its sold now

Wife has had three cars, rover 25 (which she loved, I hated), Skoda Fabia VRS (diesel) which was excellent and a comedy drive. Now we are back in the UK its a Skoda Octavia. We will need two cars next year so probably get a Tesla on order in January.