How Many Pairs of Surplus Speakers Do You Own

I was wondering how many pair of speakers do people own, excess or surplus speakers which are not connected to any systems sitting in the corner of the room or stored in boxes and kept in the storeroom.

I currently have an unused pair of speakers sitting in the corner of the room occasionally swapped in the main system. They both sound great and are keepers. Nevertheless, I have an urge of adding another one to the collection. I also have unused amps and sources in another room but they are rarely used.

How Many Pairs of Surplus Speakers 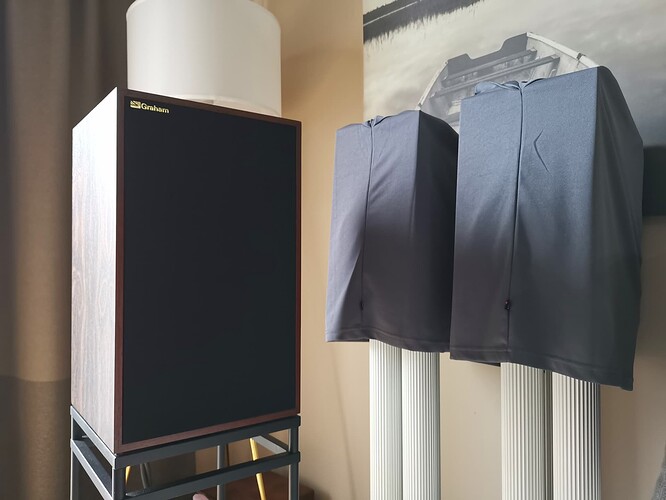 The unused pair temporarily placed in the corner of the room.

Not sure why anyone would have multiple “surplus” of anything? Don’t people sell things to part fund new?

I do have some currently unused kit, but I don’t regard as surplus in any way so I have not recorded any in the poll, but for clarity:

I have a pair of speakers now redundant from a recent change, but they don’t count as surplus because I am in the process of putting up for sale. I also have a pair of prototype DIY speakers, an unfinished project, that I don’t count as surplus because they may one day produce something to replace my current system speakers, that then would be sold, and if I can’t achieve that then the drivers will be sold. All previous speakers have moved to good homes (one of my sons has one pair, in use).

I also have a couple of currently unused power amps, kept for that DIY project which inevitably will be powered actively, and a currently used preamp, with a secondhand value making not worth selling, but earmarked for another son when one day he decides to set up a hifi system.

Not sure why anyone would have multiple “surplus” of anything? Don’t people sell things to part fund new?

Some people have multiple amps or speakers to rotate in the system as that can give a different sound or presentation that is still pleasant or enjoyable. People might get bored with the sound of the system after a while (although it sounds good) and desire to experience something different. Surplus components or speakers provide this flexibility.

Interesting! I just try to get the best sound I can afford, which to me means as neutral as possible changing the recorded music as little as possible, which is reflected in my choice of speakers so changes of speaker are upgrades and no reason ever to go backwards.

That’s comprehensible and a good point that you brought up. Nevertheless, what I think is different people have different perception of a neutral system as it’s quite difficult to define neutrality. Having said that, a system that sounds very close to neutral may not appeal to some people who put musical or coloured ahead of neutrality. Some like a more illuminated, glowing or tube-like treble as opposed to a flatter sounding treble of a neutral system, ditto the midrange or bass etc.

Not me. I figure there are X rooms in a house and no reason to not have music in most of them. As things get upgraded, the last item moves down the chain until I have enough bits for a new system.

While there’s a main system, there are offices, a kitchen, bedrooms etc. Nothing goes to waste for long.

[addendum] I have, of course, sold things to fund upgrades. And I’ve regretted the loss every time.

I have some allaes put by for emergencies, I gave the Thiel CS1.6 to my sister in law with instructions that they come back to me if she no longer wants them.

I have a pair of Royd The Minstrel SE’s which I’d love to use to replace a pair of standard Minstrels.
Unfortunately, the spare SE’s are in Australia and the standard ones I wish to replace are in the UK.
Not an easy swap!

I’ve had four pairs of speakers in my system, and I still have the three I no longer use, in chronological order, Linn Kan Is, Linn Katans, and ATC SCM7s. I have no interest in accumulating gear per se, but I would always want to keep a previous pair of speakers after I upgrade because it takes a long time (i) for the speaker to run in, (ii) for my ears to truly acclimate to their characteristics and (iii) for me to listen to a wide enough range of music to be sure that there aren’t any genres that don’t seem to work with them.

Another reason for keeping these around is the back-of-my-mind curiosity as to how they’d sound with my current equipment - would my current system make them sound better than I gave them credit for? I’ve yet to do this, of course, but they don’t take up much space and, at their present value, they’re not tying up much cash.

Sell all the speakers and get some Parker Duos

put musical or coloured ahead of neutrality

Indeed some people appear to like added colourations in their music, or other modifications like diminished bass, however “musical” sounding music is nothing to do with whether a system adds or removes anything from the sound, but simply a matter of what the musicians did in producing it…

Well I cannot vote as there’s no listing for zero surplus speakers.
I have one dedicated music room and one pair of loudspeakers. That’s all I need and want.

The questionnaire doesn’t work for me, as there is no "None’ box to tick, which seems a strange oversight.

I have three pairs of 'speakers in my main system, but all are in use all the time whenever music is being played.

I think people have an odd idea around colouration. I’m not sure people fully understand what neutral even means. There are two hard truths in loudspeaker design:

There’s a certain degree of OCD in this hobby where people hold this view that this is an answer. A model of a correct sound. There isn’t. It’s a notion that has to be put aside. On the other hand, the chances that what you hear in a good hifi is more revealing than what the mastering engineer heard are pretty high after a certain point. But neutral? Forget it.

A interesting couple of quotes from Hifi Pig;

Based in upstate New York at Valhalla Studios, Darcy uses PMC’s flagship, the fact fenestria, in her mastering suite. This choice of loudspeaker demonstrates perfectly the ‘from studio to home’ philosophy of PMC. As Darcy puts it “When I’m mastering, I am listening for a level of detail that is probably more in line with audiophile listening rather than the broader strokes of power and balance often favoured in mixing environments.”

Jeff Willcocks, PMC’s CEO adds his thoughts “We have long espoused the notion that there is only one way to design a loudspeaker, and that is the right way. It doesn’t matter whether the speaker is for studio or home use, and that is why audiophiles who want to hear the music sounding just like it did in the studio know PMC will give them that emotional connection to the music, in the way the artist intended. Darcy’s use of our flagship speakers, the fenestria, is the strongest possible reinforcement of the ‘studio to home’ approach we have always taken.”

Just the one pair here - some inexpensive speakers I had as a teenager from Richer Sounds until I graduated and bought my current B&Ws. I think my father has a pair of Celestion speakers stored away somewhere too. Neither see any use, but aren’t worth anything significant as part of a trade in, besides sentimental value. In terms of electronics, I have an old Cyrus Amplifier, Arcam DAC, Technics CD player and Amplifier from various upgrades over the years. Planning to keep hold of them all until I move in with my partner, and they’ll then be used for a second system, or part exchanged to fund a loudspeaker upgrade.

I don’t know about “surplus” but I’m definitely not swapping them in and out (4pr) like I used to.

Since upgrading main speakers from Credos to Allaes I am using one of the Credos as a centre speaker for AV purposes.

I agree it is impossible to know what neural is, unless you can hear the original in the mastering studio, through their main monitors - however it doesn’t invalidate it as a goal. One test I think is significant is whether speakers sound equally good on a wide range of music styles, and sound natural on acoustic things, in particular piano, on more than one recording. If they don’t, my feeling is that they have significant colouration and are not neutral. If they do, then they probably are pretty neutral.