Really, just statements from musicians, which made you smile, as they seemed to perfectly sum up, the person, or the band in question.

Denise Johnson , singer with Primal Scream:
“It was more like going for a night out, and you might do a bit of singing in between!”

Lemmy:
“I was thrown out of Hawkwind for doing the wrong drugs.”

Years ago Charlie Watts had a big band with 3 drummers. One day they were rehearsing at Ronnie Scott’s club. The were having trouble with an arrangement of one number in particular. During a break Charlie asked Ronnie what he thought about the tempo of that tune. ‘Great’ said Ronnie ’ I liked all 3 of them.’

George Martin is producing Jeff Beck’s Blow by Blow and Jeff ever the perfectionist calls up George and says that solo on such and such a track I think I need to re do it. To which George Martin replies but Jeff the record has been in the shops for the past three months.

Jasper Carrot, around 1978 I believe. Certainly not a Lennon quote.

Just waiting for that one - some Lennonologist looked at every quote/interview Lennon gave and couldn’t find any reference to this - good as it is - as Householdnaim says now credited to Jasper Carrot.

Bono. “It’s like the songs write themselves. I believe the songs there, we just need to let it come through us”

The world renowned pianist Eric Morcombe to conductor Andre Previn …
I’m playing all the right notes, but not necessarily in the right order.

Thomas Beecham’s description of the sound of the harpsichord:
“…two skeletons copulating on a tin roof.”

Apparently Kevin Coyne was asked by the Doors to replace Jim Morrison. When asked why he didn’t accept he said he didn’t like leather trousers.

I recall Ringo saying it was the sort of comment John would have come up with - typical Liverpool humour. 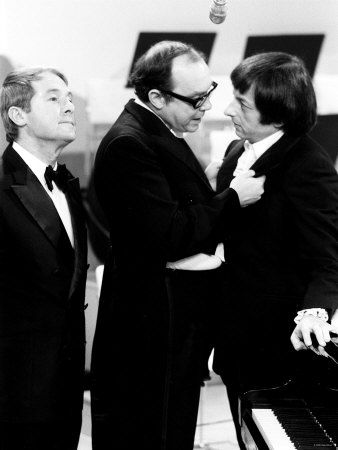 Paul Simonon of The Clash talking about when they went to Jamaica. Excited at meeting Lee Scratch Perry (The Clash covered Scratches production of Junior Murvin Police & Thieves on the debut LP), what did you think of our version? enqired Paul anticipating a complementary reply, “You ruined it!”

Neil Young having just finished the album Tonight’s the Night opens his show and plays the whole album through to an audience that hasn’t yet the grasped the greatness of this work.

Neil sensing the crowd is a bit restless says ok now we’ll play something you do know. He then proceeds to play the whole album again.

Yes, in his mammoth tome Tune In, Beatles scholar Mark Lewishon definitively debunks the story that it was Lennon. As you say, it was Jasper Carrott in the 1980s, more than 12 years after the Fabs split!

Ronnie Scott always used to do a bit of a stand-up. They’re available online, so I won’t repeat them. He was very funny though.

Zappa had an amazing range of sharp and funny quips/observations. Again available online. A pop philosopher if there ever was one.

Gordon Giltrap on playing the guitar, “If I play a bum note during a concert, I play it again and tell ‘em it’s jazz”.

Suzy’s Giltrap line reminded me of Ton Lehrer’s introduction to The Irish Ballad “This type of song also has what is known technically in music as a modal tune, which means – for the benefit of any layman who may have wandered in this evening – that I play a wrong note every now and then.”