I’ve seen loads of SBL’s over the years but not many IBL’s, did they come in black only as the pairs I have seen were black. I’d be interested to try a set, I understand they sound great?

Most were in black ash, because that was the preferred style back when they were introduced. However, there are also some pairs in walnut and even a few in piano black, which was basically done as a custom job by taking a regular pair and then having them painted by a local custom paint shop. There may be some in beech or cherry, but I don’t know for sure. I’ve never seen a rosewood (rosenut) pair.

Thats my finding as well. I have a set. I needed an Ixo and 2xnap 200 to get them sounding well, I guess that a Nap 250 or up will do the same or more.

What surprises me, is that Julian apparently was using them with a Nait 3. I never understood that but maybe someone knows more about it.

I had a pair in piano black - which I sold about a couple of years ago. What they did was good, but they didn’t get very low in the frequency range. I used them with a variety of amps, including active 135s. I gave them to my daughter for a few years, and she liked them - but not the wires.
I sold them to a guy in Italy - can’t remember how much for, but not as much as I thought that they might go for. I hope they are being enjoyed.

What surprises me, is that Julian apparently was using them with a Nait 3. I never understood that but maybe someone knows more about it

I saw a pair of IBL’s at Julian’s house which he had either side of his TV - he probably had the Nait 3 configured with them.

Using mine with a 250DR and sounding as wonderful as ever. Here they are during a cleaning session and where they appeared in the square brochure. 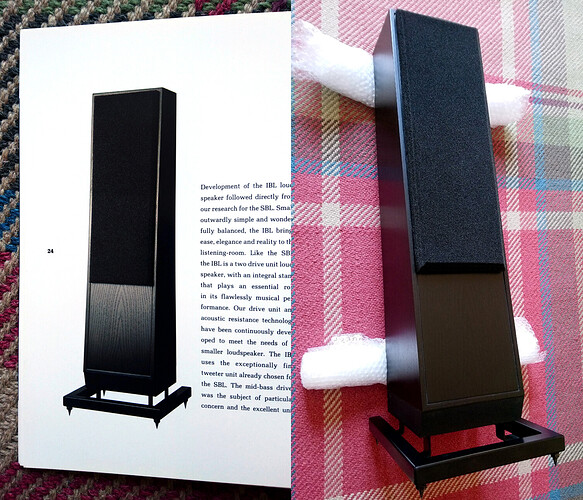 I had a bit of love-hate relationship with a couple of black pairs.

Probably the best sound I got from them was with my Nait 5/ FC2 fronted by my mid eighties Valhalla Linn, with LVII and an A&R p77. This probably won’t come as any surprise to the cognoscenti but surprised and delighted me at the time.

I would have kept a pair of IBLs back then if I could have afforded a CDS3 to complement the LP12. They need a good source.

The ones I have heard sound like sbls but without the bass and therefore no real presence, alright if you are sat on then I suppose. Any speaker of that size requiring 6k of amplification to sound good is really best left imo they just sounded like they physics behind them, weedy and toppy

I had a pair in walnut back in the early nineties. They were very pretty, and impressed me in a dem against other small speakers using intro level Naim amplification, but I rapidly realised they weren’t making me that happy. When a friend said ‘Where’s the bass?!’ they had to go. Changed them for SBLs which I lived very happily with for years. Active SL2s on a 500 system now. Gorgeous.

I still have my pair. Loved them when they were fronted with LP12 and 250. Now doing duty with Rega P1 and Brio in the front lounge. Sounds ok but certainly not getting the best out if them. Can’t bring myself to part with them despite the slightly dodgy crossovers. Keep thinking that one day I’ll put together a CB set up as a retro second system to give them what they need. Would love a Walnut pair though. I don’t agree that they don’t do bass though. With the right amps they do punchy and tuneful bass. But no, they’re not DBLs or Isobariks in that respect.

Had a black pair for several years. Fronted with a pair of 250s and backing onto a stone wall they do a surprising amount of bass. One of the most engaging speakers I have ever heard.

morning! Funny we should be discussing this as a pair have become available on everybody’s favourite auction site, £475 starting price seems a fair whack though what do we think? I’d really like to try them but my good pal said he thought they were terrible and I tend to trust his judgement on things in respect to hifi. Do they need some big amps to drive them? I have a 250 so that should suffice right. The SBL’s could be driven well from my Nait 1 and 2…

£475 is way overpriced for black ones, particularly if they are Mk 1. The post 1992 Mk 2 is the one to get, with improved cabinets and modified MS bass unit. I had some Mk 2 in cherry, with a CDS2, 82 and 250 and they were great, but I wouldn’t use them with a lesser system or they can sound thin and unrelenting.

Though they could almost be a bargain if you fall in love with them.

I take it you can’t get replacement bass drivers for these now (probably the same issue for NBL / DBL mids too) ?

I owned a nice pair of mkII IBL’s in black ash, driven by a CB250. I loved the looks and they were perfectly sized for the room they were in but felt they always sounded a little constrained somehow. They would never let their hair down, whereas my mk 1 Kans were a riot in comparison and a heck of a lot more fun.

I could never decide though between mk 1 Kans and SBL’s. The Kans could get a bit tiresome after a few months, so I’d swap in my SBL’s. When I got bored of the SBL’s the Kans went back in.

I payed 200 euros for mine. They are not in optimal state but just enough.

I’ll bring them back to glory in the years coming but not sure how yet. Sbls are easy to sound well, ibls are different.

Well they’ve sold now so someone has paid more than that for them. I did want them but not paying over market rates I mean they were around 200 or so last year!

We have IBLS, SBLS and SL2. IBLS are fantastic used in our second system on end of NAIT XS.

IBLS sound good at the end of Nait 2 as well as larger amps.

They are really fast and exciting, lovely top end and mid range.