A tweeter has blown (well stopped working there was no big pop moment) in my right SL2. (It’s being sorted by the wonderful crew in Signals).

Fortuitously being the nice Dad I had bought KEF LS50W for my sons music production hobby/career. He agreed to use headphones (with my old Hugo TT so he’s not exactly slumming it) whilst I’m without music so I bought some Atacama stands for my listening room.

and plugged an internet cable into the KEFs £2k, Roon found them and I’m playing music.

Of course there is the relief of having music playing, but I’m not listening any less, my feet were tapping and I actually woke up this morning wanting to continue listening where I left off last night.

My main system is undoubtedly better but not in any way by a factor 15. Is it 3 times as good, I don’t know. The cabling on my main system costs more than these speakers.

To think I hovered over a buy button on a £1.5K cable to connect the Aries to the m-scaler !

For some reason these words come to mind:

And on the pedestal these words appear:
‘My name is Ozymandias, king of kings:
Look on my works, ye Mighty, and despair!’
Nothing beside remains. Round the decay
Of that colossal wreck, boundless and bare
The lone and level sands stretch far away

As promised, I’ll get my coat…

One comforting (??) thought: as you get older you might not notice failure of tweeters!

You are not crazy Sloop, I recently bought a pair of AirPod Pro’s to use at work with Bluetooth cast from my IPad. I am not claiming these things to be “high end” by any means, but the satisfaction is there in spades, simple, yet brilliant. I just send the various Radio Paradise stations from the free App to them, maybe the younger generation are on to something, who knew?

I honestly am not suprised in the least. That KEF model warrants the praise and accolades; it’s not by mistake. I, too, often wonder about diminishing returns, but sprinkle in moments of realizing that the often exorbitant cost of many a component is not always indicadive of ‘better’. That means many different things to many different people. Boogying, having fun and just enjoying music rather than listening to electronics in a system, to me, qualify. It’s just a huge bonus and absolute relief when there are as close to equal measures of both resolution/thereness and getting lost in the music as possible.

I wonder if you’ll feel the same way if you’re still waiting for your SL2s in a few weeks. It’s rare that I don’t hear any benefit when changing something for an assumed ‘lesser’ model. There’s often ‘something’ that’s better and I may latch onto that for a while and enjoy the improvement in this one area. It will be interesting to know what you think when the SL2s are back in operation.

So what do you enjoy about the KEFs? The sound must be radiating out from a much smaller area - doesn’t that help timing in some way? 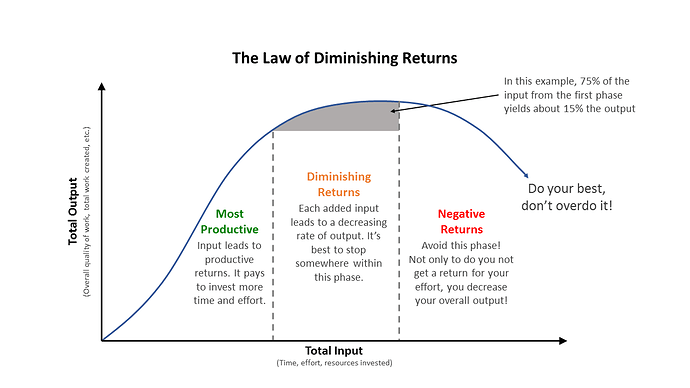 Some of the threads on this forum, from people spending 30, 50 or even 100K+ on their equipment, who end up feeling miserable because ‘something’ doesn’t sound completely right make me really depressed.

I’m somewhere around the first dotted line, and i’m trying really hard not to venture into the middle area. I don’t believe there is any real joy in that area anymore, mainly compulsion, which will eventually lead to disillusion…

I’ll say the Uniti’s are along the first steep curve with the entry level classics at the first dotted line.

I’ve crossed the threshhold of negative returns and quickly learned to step back. I’ve vowed never to return to it again in this hobby. Sure, I dabble with new stuff or sell things here and there to supplement the latest craze or to help add to a component, but such costs remain somewhere between the goalposts within the diminishing field of view; typically to the left of it. I’m quite happy with a consistently mid-fi system in the grander scheme of things. It has brought more joy than I can ever reliably remember from more expensive/elaborate layouts.

The secret is that hifi is all BS really and like most things, it’s possible to enjoy the experience with much lesser variants.

I was really surprised by my old Templars after refurbishing and for a moment wondered why I ever spent 5x as much on another pair of speakers. I honestly think if my speakers packed up tomorrow, I’d downgrade and still be happy.

Would I want to downgrade though? Heck no as I love how my system sounds, otherwise I wouldn’t have parted with the money.

Enjoyment is key imho. Lose that and you might as well give up. Same goes with cars, food, drink etc. etc.

I think the problem with high end stuff in any area is that it has to perform perfectly in order to be pleasing, it all depends on your expectations, which in turn are based on your investment. When you have low expectations you can only be pleasantly surprised when it turns out better than expected.

There is an inverse relationship between expectation and satisfaction.

Agree with the expectations. Nevertheless, every time I play music now with the new system I am delighted and happy with a grin on my face, and the old system (which was much more modest but still beyond what most people think reasonable) is still in my memory enough to know that it didn’t come close in enjoyment or SQ. Simply no competition (and speakers did not change)

At my main home in the UK, I have an active system with 3x250’s, and NDX2 with XPS2 power supply, a 252 preamp with Supercap, SNAXO 362 with another Supercap, NBL speakers all of which which cost rather a lot of money.
For the foreseeable future, I’ll be listening to a second system in Sydney so I couldn’t physically get much further away from my main system.
The 2nd system in Sydney is a SuperUniti 2 into a pair of Neat Momentum XS5i speakers.
However, I know I’ll enjoy the music just as much as my main system and, I won’t truthfully miss the main system much at all.
That is, until I can return to the UK and then, I’ll realise just how much better my main system is.
However, is my main system really worth many times more?
Probably not but I do enjoy it!

End of the day, it’s also a hobby (a great one) and there are worse things you could be spending your money on…

Cars spring to mind, a ridiculously fast depreciating asset generally. But one I’ve always been a sucker for.

At least with Naim, money maybe tied up but with great residuals, kit that’s so desirable it always seems easy to sell.
If you ever want out, it’s not an overly big deal.

Each to their own as they say.

Yes, there are sweet spots at various levels on the way up.

Plateaus where a really good system has been created.

Creating the system is itself a large part of the enjoyment.

After a few years on a plateau even a great system may become boring to the owner.

Then he makes a radical change, as the OP has done here, and gets a thrill from that change.

E.g. SiS recently bought a pair of Acoustic Energy AE1s and had loads of fun hearing a different presentation of his favourite music, which refreshed that music for him.

After a few months with only KEFs a change back to an excellent Naim system might be equally revelatory.

After a few years on a plateau even a great system may become boring to the owner.

This is something I don’t recognise… If the system is truly a ‘great system’ in the music playing sense, then to me the system is simply forgotten, and music played, and it never gets boring. Systems can of course be improved, though normally with the law of diminishing returns (exceptions do of course occur, such as when there is a breakthrough product as with some DAC developments still).

For me, if I hanker after something better or different it is not boredom with my system, but my imagination of something so supremely wonderful that I will disappear into the music never to emerge… (!) E.g. I have an imagined aural image of the transparency of good full range horns - will never happen, not least because of the colossal space requirements. More practically, I do know of speakers are better than mine, but with significant practical constraints as well as such cost that they would remove funds otherwise usable for some significant other purpose - these factors might not necessarily rule them out completely or forever but does for now, at least until I have a different listening room with better space and/or spare cash with nothing else to spend it on. Boredom certainly won’t feature in any decision to change.

Otherwise Dave is so good I cannot and do not imagine anything better being possible - I might one day try MScalar just to find out more out of curiosity than anything. However as its effect may depend on the renderer feeding it, and in the long term I still have a problem to resolve there which might lead to a change, I’ll hold off trying for now.

As for amps, my interest in trying others is passive not active, and purely one of curiosity based primarily on the things said about them by others, especially people whose seem to be objective in their assessment (as far as talking about music reproduction can be objective).

In my twenties I was a rep with a Mk 1 Cortina. It had rubber mats on the floor. It did have an AM radio, no FM , that was another model up the range.
But it did give me the music and with all that driving about expanded my interests in not just what I knew.

John Peel expanded my musical understanding every time I tuned into his show on whatever radio I had access to.

I suspect sjb used to listen to JP occasionally too…

Nicky Horne was my musical mentor… “Your mother wouldn’t like it!”

That’s where I came in, the Pink Floyd Story led me to buy my first LP. I’m usually late to the feast.

Totally agree with the OP. And it has always been that way.

And yet there will be dozens of threads here were people will post 'night and day results’ and ‘worth every £’ after every expensive tweak or upgrade.

I get it, it’s a hobby but a sense of proportion would go a long way.