My 1982 LP pre-cirkus consists of a Valhalla power supply, an Ittok LVII arm and a Goldring g1042 / NA322/4, the springs and the belt were changed a year ago.

I am very happy with this balance, but I will wish to make it evolve…

What would be the upgrade that could make it closer to the CDS (more material sound and better bass grip)?

Thank you for your opinion.

If you want it to sound closer to a CDS then upgrade to the Cirkus. It goes a long way to removing that bass bloom that personally I hated. If you could stretch to a Lingo 3 or 4 and a pre loved Kore so much the better.

@Crifo as @stuart.ashen suggested I would look first at Cirkus upgrade and depending on your budget Kore or Lingo, I still have Ittock VII, I would not look to change that at the moment

In Linn’s world the bearing upgrade is crucial to ensure further upgrades work for a sound improvement.
In turntable’s world great care is taken in dealing with bearing and psu and any other structural issue.
But I think you have a good balanced tt and you’re happy and the precirkus is not that bad.
If your aim is to preserve and improve that ‘balance’ do not get a cirkus but a lingo and you’re done
The better bearing will expose the weaknesses of what you have now rather than the strengths a good lingo would.
If you want your turntable to approach higher levels and compete with the likes of SME, Brinnkman, etc. do the cirkus.
But that will be the cheapest upgrade of an expensive long journey to achieve it.
A psu upgrade now would also be useful in case you happen to set off later.

Thanks for your help, that’s great!

It may be worth noting that the pre-Cirkus Linn was contemporaneous with the IBLs and SBLs.

Prog Rock drives the Nine realms daily. And here we have moved on from Cirkus to Kore for a clearer, more dynamic and expressive rendition of our favourite genre. Have you considered an on board phono stage a la Prefix? Don’t forget an Armageddon as an alternative PS, although I’d have to admit the Lingo 4 is a game changer and leaves it gasping in its wake. LVII is fairly bold and bouncy but not so good with subtle interpretation and details.

Roundness as a term suggests that you like the bloom of the pre Cirkus bearing. Perhaps take your Linn to your dealer and listen to it next to an Akurate LP12. This will at least show you the direction of travel that the Linn upgrades give.

Agreed on the Khan top plate. I got an 18 month old LP12 from my dealer with a Khan, Keel and EKOS 2 and subsequently fitted a Kandid, Radikal and the TP Tranquility. I particularly like what the Tranquility does. The guy who had the LP12 before me turned it in for a Clearaudio parallel tracker. His loss!

Do you think that Linn Adikt can make an improvement on the Goldring g1042 in my turntable configuration?
With the Goldring, I’m a little disappointed with low end spectrum that I find a little smoother for Rock.

Adikt is reportedly a modern day Goldring.
Who knows how the 1042 would perform with the suggested tt improvements!?

Yesterday with a friend, we spent a few hours testing some catridge on my LP12…

Looks interesting, especially that it is not necessarily the most expensive the best (we preferred the Goldring 1012 to 1042 for its side more punchy).
The Ortofon is the most pleasant, weight in the low end with a lot of readability and a striking medium!
It might be interesting to listen to a 2m Bronze??

Another very good MM is AT95SA.

It costs in Sweden about € 210-220:-.Our group thinks it plays better than Linn Adikt. Linn Adikt also costs more than twice as much.

I will also take the time to warm my new AT-VMN95EN mounted on the K9. 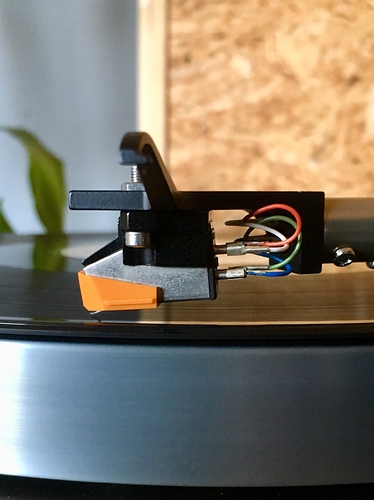 For the moment it’s a little bland, I hope that in a few hours it will be as agile as the original K9.

As far as bang for the buck upgrades, cirkus (only with newer sub chassis) used kore and used modified lingo 1/ Armageddon are tough to beat. Thorough and good set up also a key.

Being the friend Crifo talks about, I can only endorse Crifos saying.

For the Goldring, even if the G1042 had a more defined sound, the 1012GX was more pleasant, more engaging, whit that extra punch whitch suited well with the prog rock we listened to.

As for the Ortofon, its a lovely cartridge. Like Crifo I would be interested in hearing models of the present lineup. Crifo is looking for MM, but I would also be interested in MC (not on a LP12, but on my Rega P9 as a replacement for my Dynavector DV-20X2H).
Marco