And im not he today

A new TIDAL implementation is now available in version 2.1.0 (now in public beta)

How do you get this? Has it also got UPnP bridge integration for Ethernet?

I was signed up to their feedback zone, it auto alerts to progress.

Just realised this is NOT the “Integration with TIDAL Masters / MQA” feature awaiting MQA certification.

Ah, thanks. So it’s just gone out ot the beta testers

I was signed up to their feedback zone, it auto alerts to progress.

Anyway, excited that this new release is now imminent…

Email support and they’ll add you in. I’m not a massive fan of Tidal but this will add a consistency to the Sense app which few others will be able to get near.

Thanks just finished the remote session, so far i like the integration, but still awaiting MQA.

My Chord DAC doesn’t do MQA and I’m not a fan given the simply weird range of variable quality I have heard. From “stunning” to “I didn’t know that was recorded down a toilet/in a wind tunnel”. I already have sufficient variability with Qobuz Hi-Res.

For me the key is just having the Tidal integration match that for Qobuz as closely as possible.

A few years ago i did use my Zenith in Roon mode, but at the loss of the music to RAM then isolate, but even then i preferred MQA over Qobuz 24bit or Local HiRes, just felt more analogue.

Looking forward to trying it soon, i just want 1 streaming sub, Spotify i have given up on HiRes, Qobuz catlogue is poor and a few albums i like are now only 16bit, they where 24/44, Tidal is too Yank centric, but i can find my Spotify playlists on Tidal using Soundiz.

It’s interesting how our experiences vary. I don’t think in terms of resolution. Does it sound right or not? MQA mostly did not. Qobuz hi-res varies hugely and after a bit of experimentation I have concluded that to generally be the case across any streaming service. Mastering trumps resolution in terms of what matters. I have several recordings I prefer at CD quality and several not. Equally Tidal CD qualify differs to Qobuz and sometimes I like that and sometimes I don’t.

I keep hearing the library quality argument but for my very broad tastes I can find most stuff on Qobuz with about 16 only available on Tidal.

Just started testing the public beta. Can’t say I’m fussed about the album or track mix stuff but some in the family will love it. The Tidal integration is all you would hope for if you’d enjoyed the Qobuz integration. Too early to comment in detail but there’s lots of things been tidied up and first impressions are very positive indeed.

Working with Innous to figure out if the beta has caused the Naim streamer Room Not found, they asked for this screenshot, interesting assume this is all mutli room related ? 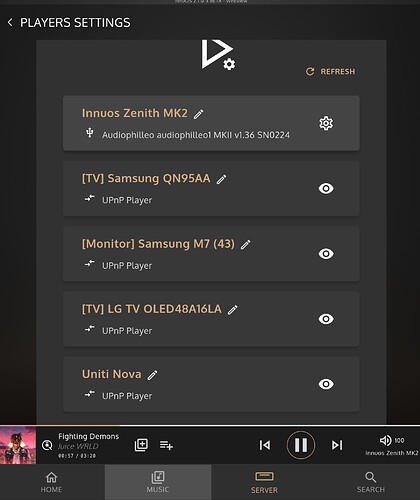 No problems here with ND555 and Atom HE

Is there any notable change in sound quality with this TIDAL integration? or sound quality difference playing back ripped CDs with 2.1.0 beta?

Not that I’ve noticed since Friday. It remains excellent but, in my system, no obvious change.

I see Innuos have launched a range of streamers now. Be interesting to see what they bring to the table.

Wow no fanfare, no mention, wonder why they would offer a full Tidal unfold to mere server owners.