I find it weird to debate in these terms. If they’d had a proprietary app from day one they would have been criticised for lack of functionality and not opening it up to third party apps. They’ve very much concentrated on getting things right before release so I’m disinclined to comment negatively as regards their own app. One only has to read the reviews to see that one of the most common comments is that there are huge, complex aspects of Innuos devices that “just work”. It takes a hell of a lot of work for things to just work.

As for this idea that stuff can be done from home. Well yes much of it can but that doesn’t mean the infrastructure was in place to do that nor that it was possible for that to happen. We’re in the middle of a pandemic for goodness sake. You can have 50 staff all capable of working from home but some will have children; some will be carers; some will have poor net access; some will be ill and some, quite frankly, will die. The idea that C-19 ceases to be a credible explanation for delays is so lacking in insight and empathy it’s hard to know where to begin. 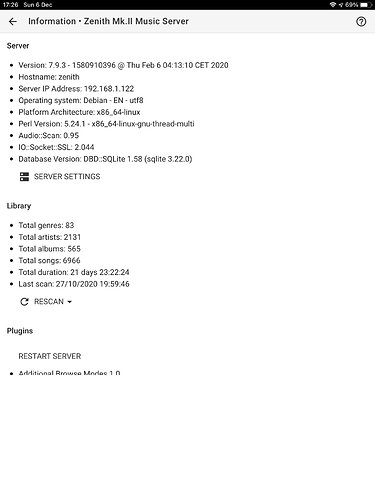 image1536×2048 173 KB
As mentioned before the InnuOS is a highly customised Linux stripped down to bare essentials with no capability to run general Unix programs. I guess LMS is a standard release. With Material Skins LMS works as well as iPeng. Basically it is Safari as an App.

I would expect their App to work much the same, but much better. It may need to diverge more from LMS/ Squeeze Lite or whatever. Not my area of expertise.

A lot of what people think of as a bespoke App is just visual and graphical user interface. Underneath it’s mostly a relational database (currently SQLite).

I don’t underestimate the difficulty of getting these things to work especially if they aim for something to give Roon a run for their money. Roon’s curation is very slick and is coupled with proper seamless integration of TIDAL, Qobuz etc.

Sorry do you work for Innuos ?
Or is the 50 staff and situations just a random comment?

1.4.6 SQ Not sure as not listening as much during working from home

Listening to DVSN - A Muse in her feelings, a regular hit play and listen to the whole album.

For sure more bass, but the mid range is more detailed, soundstage positioning and very clear differentiation between different singers and also background nuances.

Does seem a trade off in HF and a loss in PRaT emphasis.
Need to listen more…

No I do not. My comments were in regard to the arrogance of complaining about the lateness of an app

a - in the current environment, and,
b - to maintain your reputation for things that simply work.

Perhaps the best is to have some experience at home with the Ipeng app and see how it works. Then it will give more objectivity to judge Innuos server.

I’m surprised anyone observed a change in sq as I was under the impression these changes were just to prepare it for version 2.0. Pretty sure mine hasn’t changed in how it sounds since the update

I think Naim firmware changes have shown how hard firmware updates are and how they can impact/change the SQ.

I used to use Orange Squeeze, then went iPad and used iPeng for over a year now.
Also used Roon which is by far the best UI/functional choice.

I didn’t notice any change, apart from it initially sounding terrible due to being on experimental mode, after a reboot was ok.

The one big difference with this release is the update to LMS 8.1 which now allow for integration of streaming services into your local library. It requires one of the plugins to be activated to work. But it’s actually quite nice to have all my favourite Qobuz albums now appear in My Music, New Music, Album views and so on. So a bit like what Roon does. But I still haven’t figured out a way to add favourite albums via the iPeng app. I still need to go back into the Qobuz app to add an album to favourites first.

I’d concur with Obsydian, in that I can hear a SQ improvement.

There is definitely more refined low end in my system, that’s for sure, though I’m not sure if that’s traded off against something else being diminished.

Only played for an hour or so.

I tend to do everything in Qobuz and Tidal, then use iPeng to access my favourites and playlists.

More I listen I feel overall it has lost the Innuos neutrality but with 1.3.6 now adding its signature which is more LF and MF focused.

I decided its not to my liking.

So here’s the pickle now, as we all worry about Naim firmware changing the SQ, now we can add Servers to the mix.

This streaming lark makes me want to go back to a boring classical or vinyl based olive system, otherwise the system demonstrated and purchased, will change for the better or worse in terms of SQ, leading to all sorts of speaker, room acoustic issues.

Yes, but as per 1.4.5 which was positive SQ nothing relating to SQ is mentioned, but that’s no different to Naim firmware.

Update for you @glasnaim, it took 2 weeks and 2 days from when I dropped it off at my dealer, and it went back to Innuos HQ in Portugal to be upgraded.
Very happy with the results and all the files were transferred over without any problems.
I did have a problem connecting back up to Roon though.
Raised a ticket through Innuos Support, very responsive, Nuno remote connected in and fixed my issue (which was my fault actually, operator error, doh!).
In summary, it was a very smooth process, my ears are telling me it was worthwhile, and if there are any problems, it gets sorted quickly.
Just so you know how it went, apologies for the thread ‘creep’.

Hi @ChrisH, Thanks for taking the time to update me. It sounds it went well and a reasonable timescale, something I definitely will consider. Innuos do appear to be on the ball, I’ve made a few enquiries, always quick helpful answers. Enjoy your new Zenith.

Always good when a company knows the ins and outs in detail, benefit of in house design.