I ran it with and without an XPS. I heard a slight lift… it’s funny that the sales guy was like… OH MY GOD, can you hear the difference!!

Since it was passing data over ethernet direct to the NDX2, I can’t imagine it matter much with series of zen you go with.

To play direct into nDAC requires a USB to spdif converter. Innuos recommend the M2Tech.

A possible alternative is Gustard U12 - I used one for isolation of RF from a Hugo DAC, which it did very well. @Richard.Dane played with one a couple of years ago into, IIRC, nDAC and reported favourably. They are a similar price - assuming comparable performance (I don’t know if any comparative reviews out there), choice might be versatility for possible future use vs size/simplicity. Once the old forum archive is available you could look up Richard’s observations.

DARKO audio wrote: "…For the more seasoned digital audiophile caught between a streaming rock and a D/A converting hard place, know this: starting over with ten grand to spend, I’d take this Innuos and drop whatever cash I had left on a lesser DAC instead of putting the larger percentage of my dollars into a better D/A converter only to feed it ones and zeroes by a standard PC or Mac.

The Zenith MKII SE is as good an example as any that one must spend big, as in vinyl land with turntables and cartridges, to more fully realize the potential of digital audio; and for sound quality to transcend its transmission medium. Pair the Zenith MKII SE with even a modestly-priced DAC and feel the upgrade itch slowly dissolve as you sink back into your listening chair and exhale a pleasurable sigh of relief as music’s tension – and therefore your own – falls away."…
He tested Innuos Zen: https://darko.audio/2017/10/richer-sounds-with-the-innuos-zenith-mkii-se/
…
So his finding: drop money at the source first :-)

I found the Gustard U12 a good step or two up on the old M2Tech that i had used before. The Gustard is a nice bit of kit too, with a nice clear sample rate display - well made, fuss free and straight forward.

Another alternative that is a bit less user friendly but performs superbly is the Yellowtec PUC2. It’s a bit of pro gear though, so uses an AES XLR connection, which requires a transformer to be connected at either end before the DAC. I hung mine off the back of the Naim DAC connected via 75ohm BNC coupler (there’s a photo somewhere, but I can’t seem to find it). 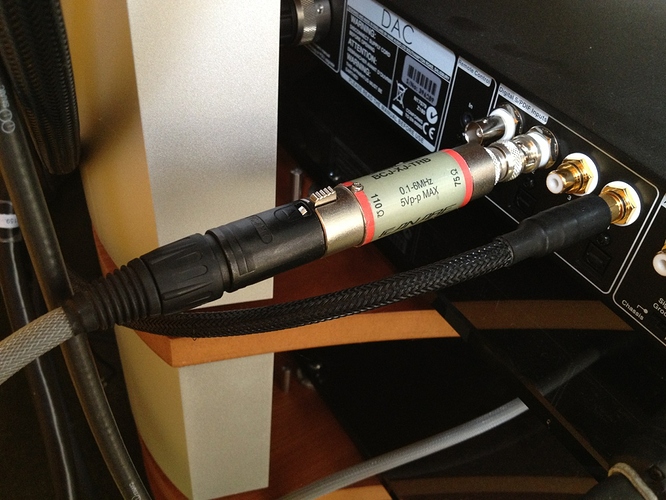 Thanks for your feedback Richard, IB and T45.38/Darko.

Hopefully I will be be able to try out the USB to spdif route over the weekend along with LPS. I assume they are sending the M2Tech version 2.

Meanwhile I continue to fiddle getting the mains plug order right and removing the Rega RP10 TT PSU off the dedicated mains (it was just a experiment lasting a few days). Something sucked the life out of everything, and I suspect it was the TT PSU.

I’ve also put the 555DR on the CDX2. Surprisingly the nDAC without the 555DR sounds very good. I have wondered whether having the nDAC floating relying on system earth via the CDX2 coax (Chord Clearway BNC to BNC) is a good idea. Now the 555 is on CDX2 (no mains) the IC carries the earth which must originate from the 555.

Right now the CDX2 sounds really good. It had got a bit flat maybe with the Rega TT on the dedicated supply.

My dilemma now is that I like Roon and I’m not sure whether to use just a Zen Mini without the LPS with a view to going into streaming eventually. I also have to decide whether in the short term to put the 555 back on the nDAC. I don’t want spend more than needed on a Zen (Mini, Mini+LPS, Zen or Zenith). The noise on the uPnP should reduce on the dedicated streamer port (like the Melco), but no idea how much it matters.

The dealer is going to clean the lens on the CDX2 which has one CD with a bad final track which the Zen did rip. I think I hear more clicks at times also. @Richard.Dane is it ok for the dealer to do this? It has had 3 years of heavy use.

Phil, IIRC Naim’s advice on lens cleaning has always been not to do it as it rarely works and usually creates more problems than it solves.

Thanks Richard. I did suspect that. What should I do instead? I guess send it back when it gets too bad.

I’m really pleased with my MK2 Zen Mini into Dac V1 202/200 s400. It’s sound quality is lovely and it’s easy to set up and use. Its a neat size , easy to set up and my 4 room Sonos feeds of it… The support on a couple of queries was prompt , helpful and affable. The new version includes a DAC so at £900 I think it represents high quality at a reasonable price. I couldn’t be happier with it!

Phil, are you sure it’s the lens and not something else, such as “puck slip”?

The new version includes a DAC so at £900 I think it represents high quality at a reasonable price.

I suspect most people on the forum may be unconcerned about the DAC, likely to use with their preferred one, whether Naim or other. I wonder how good the inbuilt DAC compares - not expecting miracles, but of course that depends on what people compare with.

Sort of…
my MK2 version is great without the dac and for someone moving into digital the I’d think the Zen mini MK3 represents even better value as its now got a Dac built in at a reasonable cost. .It’s even more plug and play than before and you can add an extra DAC should you wish to move on as suits

I haven’t heard the M-Scaler, though it has indeed been praised. No idea how it would do in this particular scenario into an nDAC …and an incy wincy bit more expensive than the other options mentioned! Spending that much other options include changing the DAC, perhaps to one that could take the Zen’s output direct (e.g. Hugo TT), or going for the Zenith instead of Zen, still with a low cost USB-SPDIF converter… which would sound best I have no idea!

I don’t know. I guess puck slip would affect all CDs. I going to the dealer’s now, but I won’t take the CDX2 for lens cleaning. I will try a DC1 and see whether that sounds better.

Are you still loving the Zen?

I love my Zen…together with Cisco 2960 switch it’s the best path for “digital done right”!. If I had to start my journey today again, I would start with these two and a good LAN cable…

It could give some buyers a route into streaming when replacing a CDP.

I run my Zen Mini Mk2 in to a Nova via a Cisco 2960, works very well and great vfm, my only issue is how it presents the album info to the Nova but that’s not a big deal