They could be wildlife, hifi, building, art, archaeological… here’s one I read about this morning. 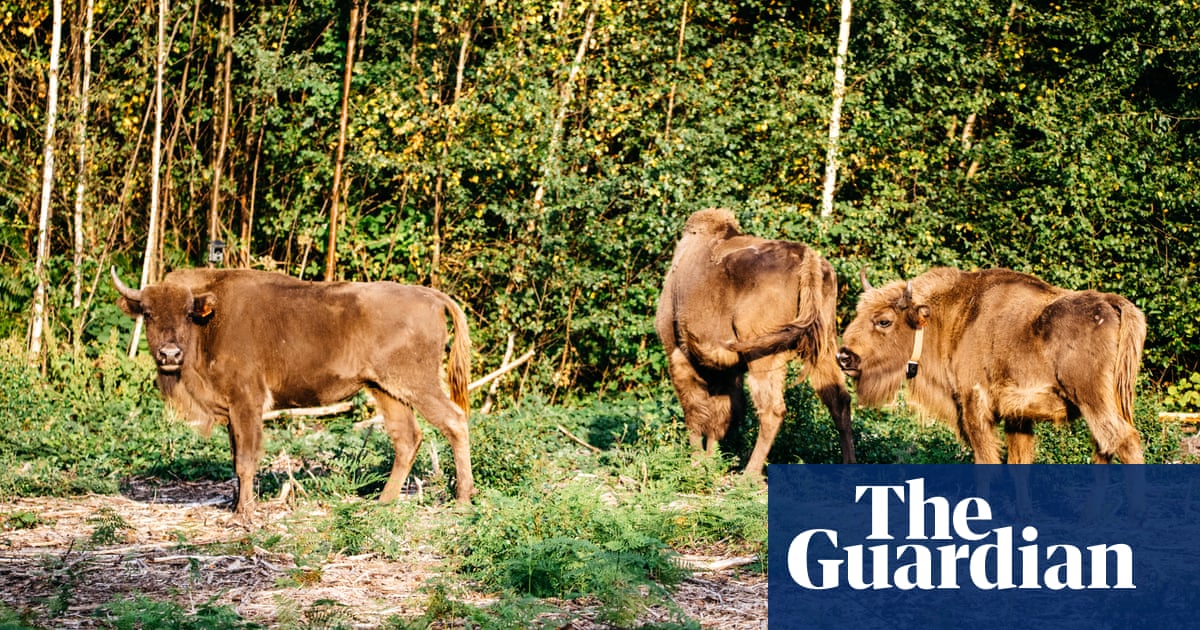 I saw my first wild bison in Poland, maybe 10 years ago. It was a shock. So nice and impressive beast, out of this world. A prehistoric creature.

I worked for a while in Poland and visited the Bison reserve in the east of the country. It’s an amazing place with its wolves and primordial Bialowieza forest … with its tall wire fences with razor wire on top, not that far from Treblinka.

Ironic or not, there are other Bison reserves in Poland. An excellent conservation success story.

I don’t remember where it was exactly, but in the same region probably, Nord East ( Mazury ). A lake region I like a lot.
There’s also another bison, the Vodka bison.

I think to remember that there are more and more bisons reserves now, because it became popular to eat exotic meat. It’s a shame and should be forbidden. The bison is too majestic to be eaten. Like crocodiles, whales, ….
I am curious what @hungryhalibut thinks about that, as he was a zoologist.

I think it’s a wonderful idea, with the bison behaviour doing a lot to keep the woodland open and thereby encouraging biodiversity. Another great one is the various beaver reintroductions, which naturally improve drainage and give more resilience against flooding. We need more of these projects before humans f… the poor planet completely.

But many of us can have our own conservation projects, with bee friendly , drought tolerant plants.

It doesn’t have to be big reserves , our own gardens can be conservation projects !!!

I have a scruffy area that is overgrown with red campion etc , cardoons three metres high - at the back.

At the front I have a herb garden , 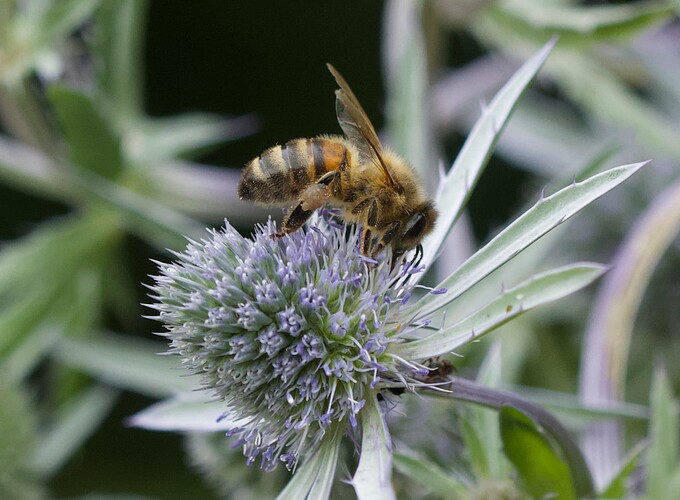 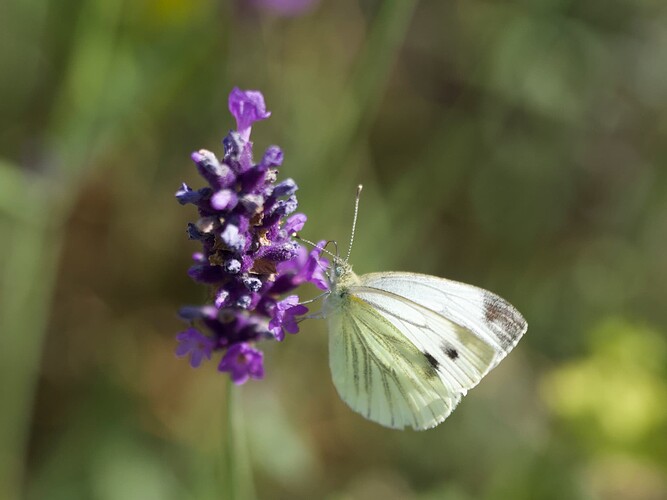 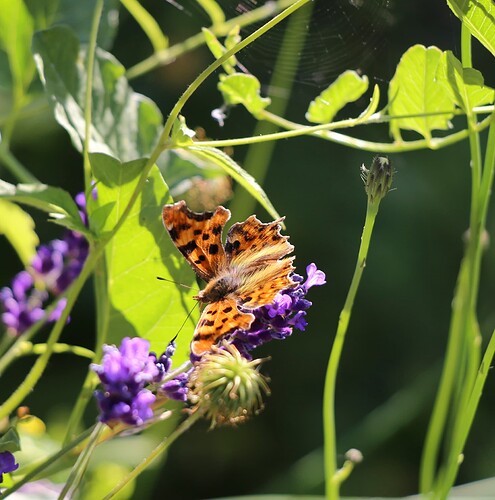 And finally a visitor that judging by the duckweed , had just been in the wildlife pond , which I dug myself . Pre-peritonitis days 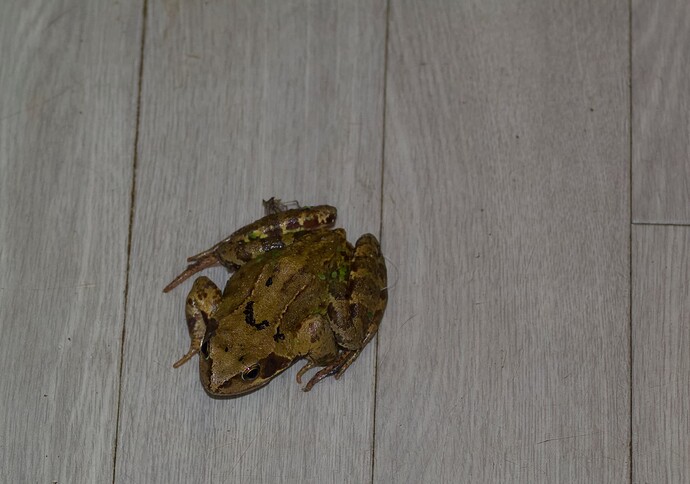 All of these photos have been taken within the last week , from my garden and er kitchen

It’s great to see these successful conservation projects, others in the UK that spring to mind include red kites, red squirrels, and otters.
What worries me is that it’s relatively easy to raise interest in projects to help interesting birds and mammals, but not so easy to protect the millions of less exciting fungi, bacteria, insects and plants which are all dependent on each other. We need to be doing this in areas that are under threat from urbanisation, agriculture and industialisation, not just in the odd nature reserve.
A case in point is the Gardening thread on this forum. For me a garden is all about plants and the soil they grow in, hopefully making a habitat in which insects, birds and the odd mammal can live alongside us. What I see there is a predominance of projects involving concrete, timber, stone, plastic, gravel etc. covering what used to be a garden. Come on guys, conserve your soil and you will be protecting a diverse ecosystem right under your feet.

Excellent point: I used to be on a committee where the county recorder always pointed out that we don’t know enough about invertebrates because they don’t have the appeal of a pine marten or bison.

There is a trend in nature conservation to focus on landscape scale projects. Often, at the expense of the small local nature reserve, which consume a disproportionate amount of resources. However, I prefer to extol the small scale garden or copse as @Ian2001 describes eloquently.

The thing is, how much interest does a garden picture like this gain? 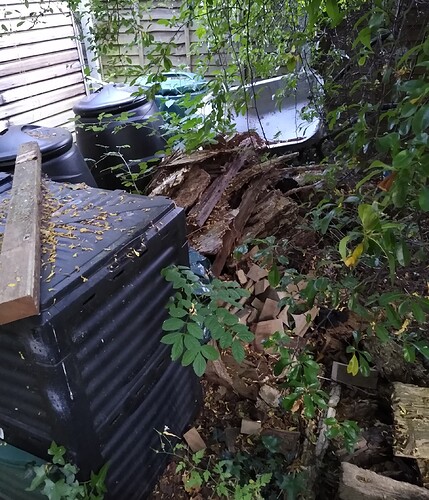 Five compost bins and the offcuts from my woodturning. I have no idea how many invertebrates live here, slugs, snails, woodlice, fruit flies, worms, wasps, hoverflies, lacewings. What you cannot see, but I know are there, frogs, toads, newts, slow worms, hedgehogs and stag beetles.

Behind the shed are the remnants of an ancient hedgerow that followed a footpath (or vice versa) that extended for about two miles. The other side of the hedge a school. When our children attended about 100 feet by 15 was the school wildlife area, a pond, a wilderness, an area where they planted sunflowers and vegetables. The school was absorbed by an academy that promptly tarmacked the area and put up an eight foot high larchlap fence. That was the point where we no longer saw hedgehogs.

I don’t know what the current pupils take away, at the weekend we visited out daughter at a house they moved into three months ago. In that time they have placed bird feeders, removed an area of “patio”, mown three quarters of the lawn. They have a no mow wild life area in which I counted about ten types of grass. We get weekly texts with pictures of the birds that visit, flowers that bloom. Walk around the estate, the stripy lawns, weeded flower beds, perfectly shaped feature trees…

I know which I would prefer. 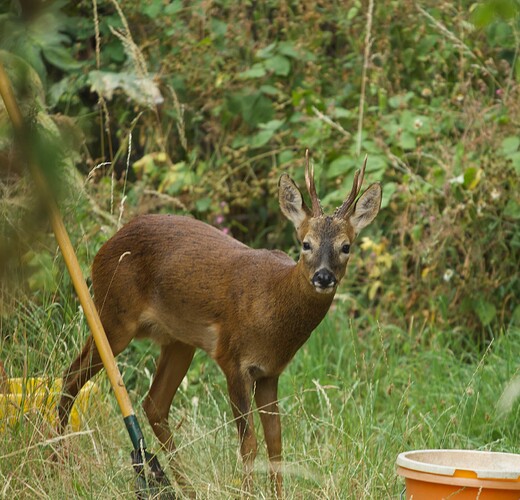 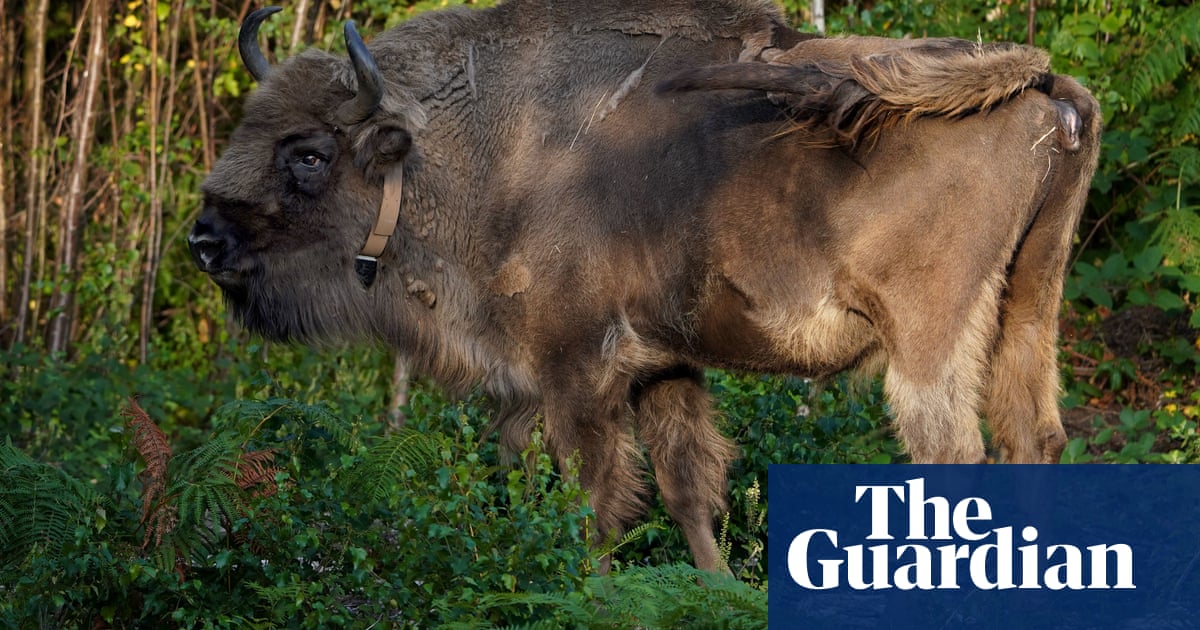 Making a comeback: rewilding in Europe gets a £4m funding boost

There is a national park in Mozambique called Gorongosa , it suffered badly in the civil wars and then was heavily poached. There are serious attempts to re-populate it and reinvigorate it.

Since I looked it up, I get frequent updates via Facebook , and they have brought back apex predators like leopard, wild dog .

Waitrose sells one of these coffees . Before Waitrose started selling it, I always bought one packet direct (quite expensive, with the postage) on a monthly basis .

I buy the coffee from Waitrose with my Amex, that gives me air miles (lack of green credentials) , the coffee supports the national park and girl’s education , and the grounds go into my compost heal and come back next year as a tomato or a runner bean .