I discovered JB Radio-2 and have been streaming via Roon. It’s like Radio Paradise but Hi-Res FLAC. The Naim app says it’s 192kHz 16 Bit… have to say it sounds very good. Anyone else listen to it?

No, but I’ll look it up in the next couple of days.

Me too - love the music choices and the quality of the sound. You can also log on to the JB Radio-2 website and pick up broadcast playlists.

Depending on your location, but if you go to https://jbradio2.ca/options, you will find an appropriate URL for you. 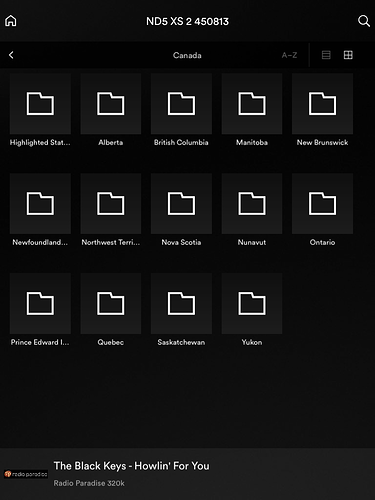 The website suggests it’s Toronto-based, so I think that’d make it Ontario.

Thanks for the tip off
I have it loaded as a preset in the regular Naim iRadio …
… it comes in as MP3 44.1kHz 320kb/s & sounds pretty good.
Very similar music & presentation style as my much played RP
Commercial Free Customer Supported
“When classic rock meets the blues,
modern rock mingled rhythmically with indie
and pop mixed with a bit of electronic music…
Welcome to JB Radio-2!”

Comes in at MP3 320 for me as well. This is via Tunein - I did try the URL for the web player on the JB Radio web page but Roon didn’t recognise it as a radio station.
It’s very comparable to RP - thanks for the tip, it’s very nice!
Does anyone have a URL for a lossless feed?

Thanks Flachead - that URL does indeed deliver 192kHz 16 Bit - thanks a lot!

Just to be picky - the 320 mp3 tunein link had a nice picture on my Nova screen and gave artist/track details - the high res feed has neither. Still very nice though

Flachead and Malla - Thanks for identifying a great Internet Radio station (JB Radio-2). I have added it to my stations on my Serviio media service. I find both the aac and mp3 channels play fine but presently having issues with the flac options (which appear to be ogg containers with flac content) and am trying to resolve what I think is a profile issue on my system so I can play these also.

One of the best Internet Radio stations I have found is The Jazz Groove see jazzgroove dot org.
They have two channels (West and East Coast) which I think are the same but time-shifted.
The direct streaming URL for the West Coast (Channel !) is http://199.180.75.116:80/stream
It is great as I can logon to the website to view the playlist in real time whilst listening.
I have discovered many interesting artists/albums as a result.
I then look them up on my Qobuz subscription and stream them again.

Another station is Venice Classic Radio in the Classical genre.
The direct streaming URL is http://109.123.116.202:8010/stream1
They have several streaming addresses and another one might be better for US listeners.
Again their website veniceclassicradio dot eu/en/ has playlist info.

I also listen to Rock on Radio Caroline (broadcast from their “pirate” ship).
The direct streaming URL is http://78.129.202.200:8030/;
They have two other different channels plus a USA time-shifted channel.
Ask if you want details but they are on radiocaroline dot co.uk

Jazz Groove is really excellent and sounds good too although just 128k, thanks for the tip. For those on vTuner you can find the west stream on North America / United States / California / Jazz

@ Paul_C: did you find a way how to play that station in .flac format with Naim streamers? I found out that for Minimserver there ist a plug in called MinimStreamer, that allows to stream and transcode radio stations. However I find that software rather hard to understand compared to others (asset and Serviio) I use. After hours I just managed to make normal stations play, which play anyway with the Naim app natively. But with the .flac format station I just get Error on the display. I don’t have any idea how to get it work.

@ Paul_C: did you find a way how to play that station in .flac format with Naim streamers?

I do not have a Naim streamer. But the answer is No.

I got both the mp3 and aac streams to play from Serviio as they are just normal streams.
I also got the two .flac streams (which I think are in .ogg containers) to stream from Serviio by adding an OGG transcode but only as MP3 at present which is not the desired outcome. I am still exploring the issue on the Serviio forum as it is of future benefit. Will post again if I get a resolution.

If I get it to work from Serviio it should stream to Naim and all other streamers.