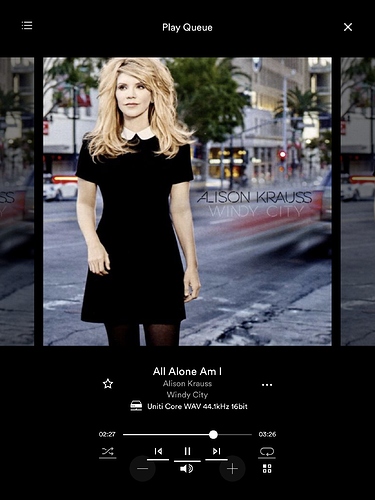 fullsizeoutput_495.jpeg1668×2224 425 KB
I have noticed that three lines have appeared on my iPad screen sometime today they are between the forward/back buttons and the volume control buttons as shown in the picture.

The iPad in question is a 2017 10.5 Pro Model but rather strangely the lines are not on my iPhone 8 Plus.

Thee lines only appear when playing from my Core to the ND555 via ethernet but are not on the screen when listening to the Iradio.

Has anybody else experienced this ?

Must be something in ND555 and/or Core with the iOS app. My NDX with NAS (Asset UPnP) on iOS app does not have it.
You also have lines under ‘Shuffle’ & ‘Repeat’ icons as well.

Mike, thanks for the reply I’ve had the ND555 for five months and this has only happened in the last couple of days my Unitilte is also the same rather strange?

Mike, just powered my Synology NAS up and played some tracks the lines are still present when using my NAS.

I think I will drop a email to Naim.

Have you tried purging the iOS app ??? Clear out both cache’s, delete the app, force off the iPad (simultaneously hold down ‘Home’ & ‘Power’ button until the Apple logo appears), reinstall the app.
It might not fix the problem, but its an unknown new problem, & for the sake of a few minutes, worth a go.

Hi Mike, Just done all that still the same I will contact Naim.

Hi Mike, I contacted Naim, William came back after a few minutes it was a setting in the iPad settings menu I must of swiped it accidentally.

The setting is called Button Shapes and when enabled it underlines text.

Good stuff, another for the memory bank.

I’d noticed the same three lines on my iPhone months ago, but never worried about it. Reading this I checked and found I also had “Button shapes” enabled. And deselecting it, the lines disappeared.

David, Will from Naim sorted this by an email reply in a matter of minutes superb service indeed.

I had spent some considerable time trying with no avail to sort.