iPod and Atom not talking to each other

I’ve just upgraded from a UnitiLite to an Atom.

On the previous system I had my trusty iPod 160Gb Classic plugged into the front USB port and I could access my stacks of playlists from tablet, app on Android phone, and even running the app in an Android emulator on my Windows 10 PC.

When I plug the iPod into either USB port on the Atom, it just doesn’t find it. I’ve tried rebooting both but without success. The USB port works OK per se because I can shove a passport-type USB disk into the port and the Atom sees the music on that without any trouble.

I’m a little baffled why the Atom doesn’t want to recognise the iPod - any ideas?

The usb sockets on the Atom do not support Ipods like the older units did. As you have discovered, only usb sticks and drives.

The 2nd gen streamers support AirPlay instead of the old ‘Works with iPhone’ certification that you used on your old Uniti.

Oh great. I wonder what the thinking was behind this downgrade?

So, not much use if you still use an iPod then?

Downgrade?
The thinking was I assume that not many people still want to hardwire a player into a streamer.
Airplay being more flexible and compatible with more kit.

This was an Apple requirement for AirPlay certification, I believe.

Just ditch the cable and use AirPlay. The old method of connection stemmed from the days when the 1st gen streamers were in development, lots of people used old iPods with no WiFi.

I do have my music collection in more than one place for backup purposes, so what are my options? I have a copy on a NAS drive and on the aforementioned passport USB disk but I find the app’s handling of playlists on disk storage rather clunky to operate. The contents of the iPod originate from iTunes on my Windows 10 PC - can I use Airplay from there to stream to the Atom or would I be entering a world of hurt?

I think you should be able to install a Upnp server on your NAS . The app should then pick up the Itunes files if they are selected in the upnp settings.

Just been tinkering and can play my Itunes music from the PC or attached iPod to the Atom. Happy days.

Cheers for the advice.

I am doing my best to get trendy and ‘with it’, honest!!

iTunes doesn’t seem to like NAS storage. Well no, I’ll rephrase…the WD NAS drives I have are badged as iTunes Compatible but when I tried to link my PC-based iTunes with them many moons ago, it became a complete nightmare i.e. multiple file duplicates, missing files/playlists, crashes, hangs, and the like. I now ‘copy’ my music to them using an iTunes alternative called MusicBee and the app’s handling of the music storage structure and playlists is like trying to drive a Ferrari whilst wearing clogs.

I know, I’m being picky but one of my work ‘hats’ for some 30+ years has been testing software user interfaces for continuity, flow, usability, bugs, etc. and the Naim app falls a little short of what I would allow past me. For example, when I was setting the Atom up earlier today, at one point I was presented with a message along the lines of “You can easily add Favourites by just pressing” (sic)…pressing what? Where? Is the user fully informed? Nope - back to the Developer(s) it would go.

If anyone from Naim is on here and would like a few suggestions for improvement, I work cheap - or they can pay me in hi-fi

If anyone from Naim

Join the fold! This is live now on the careers page. 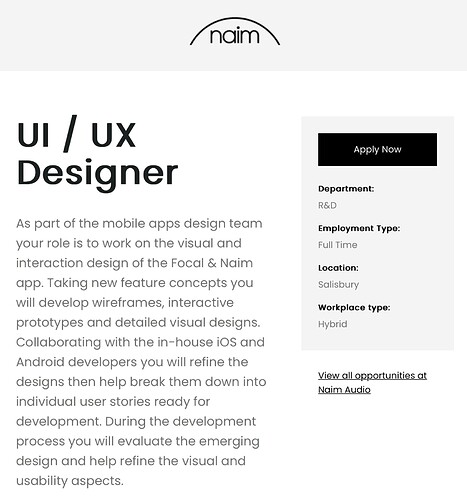 Try Chris’ suggestion then of Airplay.

Well, it does say they allow for hybrid working!

Interesting job. Oh to be young again. Alas, I am happy where I am