Is It "Just" Music

A quote from the Dire Straits favourite tracks thread, .(ack to HH) that raises a thought pondering question on what music is to each of us as individuals.
“I went off them when they evolved from a great guitar band into something where the sonic effects seemed more important than the music”

Is it “just” music we all get pleasure from, is it just the sound in time with elements of pitch, rhythm, tempo, dynamics & harmony. Is music alone an end in itself, does it alone invoke imagination that brings to you an emotion, a scene, an atmosphere ….

Or is music better enhanced with these non-musical elements; does the Private Investigations glass smash & the distant cat call evoke a damp dark night with something in the shadows ? Is that not just enhancing the atmosphere & the underlying story in the lyrics.

Do we need opera with the acting & stage effects, do we need Pink Floyd’s helicopter effects, what about those out of time/rhythm cannons in the 1812.

Personally all the above are elements of music I like, but I have yet to understand the point of some effects, the DSOTM alarm clocks in musical or imagination terms, and I have to admit that for me the beauty of ballet music is spoiled by the on stage noise of the dancers.

Begs the question, what is music?

Reminiscent of “Is it art?”…

Whilst I guess there are instances where it might not work so well! In general for me the additional/incidental sounds in or between the music to which I listen are in effect a part of the music, and it all fits as a whole. Much of Roger Waters’ music is a case in point (and Pink Floyd before his solo stuff, though that may have been his influence) - and I find his music particularly engaging.

Then of course there are the accidental sounds that have been recorded with the music, from the unintended catching of a musician’s aside to someone during the intro, to the regular rumble of passing underground trains during classical recordings in London’s Kingsway Hall - to me these are part of the atmosphere of the recording.

Regarding cannons in 1812, my assumption is that it was written that way because Tchaikovsky wanted a greater impact than hitting a skin stretched over a wooden frame, and when done well it certainly does!

As for opera, to me the essence of opera is the combination of music, theatre and the human voice, so very much the acting and stage effects are part of it, and a recording only a reminder of what it should be like, albeit with your eyes closed and a good music system you can imagine the scene in front of you…

Begs the question, what is music?

Is music just noise or sounds?

As my comments triggered the musings that led to this thread I feel I should say something. To me it depends on whether the extra sounds are part of an integrated whole. DSOTM is a concept album and the tills, chimes and other sounds are a crucial part of it. On other albums I feel that the noises are just added for effect and often turn out pretentious or simply annoying. I’d put the Dire Straits sounds in this category. They can also be there to cover up a lack of quality or interest in the music itself.

I have various live albums - one recorded at night in Africa where you can hear night creatures and passing trucks. It’s all part of ‘being there’ and I really like it. There are Keith Jarrett albums with his grunting and audience coughing, and it doesn’t bother me at all.

I love ballet and the sound of the dancers on the stage is part of it. Perhaps it’s about enjoying the real thing rather than a sterilised facsimile. Ballet music on record just isn’t the same without the live action.

Live opera is similar. I love the Met live transmissions, and of course live opera, where you hear the acoustics of the hall and the general noise of having an audience. A studio recording, where everything is perfect, just isn’t the same.

Rich you touch on what our brains interpret as music are just vibrations. I wonder how much of this interpretation is influenced culturally or socially? What is it that triggers pleasure from these, to coin a phrase, good vibrations?

I like the sounds that instruments make. I like to hear the difference between a Martin and an Ovation. Perhaps a Rickenbacker bass to a Fender. I am amazed at some electronic sounds that is in some music. And I love the sound of the human voice naturally reproduced. A good Hi Fi lets me here these things.

Of course, none of this counts if the music is shi…

I’m not sure that music can be considered as a single thing. Some of the music I listen to (particularly since my latest upgrade to S600s and NAP500) I do so for the simple pleasure of hearing the sounds that the instruments (or whatever) make. Such music may not have any deep, emotional, appeal apart from that (though the sounds of, say, cello, in themselves have an emotional impact quite apart from the music itself). So for me Booka Shade is interesting to listen to on that level. Then there is music like Rosemary Standley, and specifically her take on Tom Wait’s All The World Is Green, while technically not great, I find emotionally very powerful - or Country Joe and the Fish’s Porpoise Mouth which again in terms of recording and instrumentation is not particularly good technically is, I think, one of the most beautiful love songs. Or Hazel O’Connor’s Will You is an amazing evocation of first love (and has a fantastic Saxophone break).
And then there is Lift Music, and Shop Music - Mike Sammes Singers and other perpetrators of what is technically music but should be prosecuted under the War Crimes provisions of the UN.
Music is so variable and has so many different effects that it cannot be “Just” music. It is so many things.

Yes, the sound of a cello is a wonderful thing. Sixty Years on by EJ, She’s Leaving Home by the Fab Four, Jaqueline du Pre, I could go on…

Yes, some excellent examples.
Some of my favourite at the moment is Anja Lechner & Vassilis Tsabropoulos rendering of Gurdieff (album Chants, Hymns And Dances), some excellent playing there. And the afforementioned Rosemary Standley’s All The World Is Green has some wonderful Cello playing by Dom La Nena.

Theoretically you need rhythm, harmony and melody, not necessarily in that order, but I think if any one is missing for any extended time it fails. I’m sure we’ve all heard out of tune singing or pub bands who get faster as the song progresses or even a misplaced diminished chord. Are these still music?

Sometimes additional sound effects are added to create atmosphere. Who could imagine Quadrophenia without the sound of the sea, or the train, or even the kettle? These are essential to the integrity of the work as a whole, but they’re not musical.

I have several recordings of Wagner operas performed at Bayreuth where the on-stage noises just help to build the image in my mind, and even the audience noises add to the feeling of being there. So long as it’s not too much, of course.

On other albums I feel that the noises are just added for effect and often turn out pretentious or simply annoying. I’d put the Dire Straits sounds in this category

Well Nigel I’d have said when it comes to embellishments Dire Straits are minimal. Agreed Industrial Disease is somewhat pretentious, although fun all the same, but other than that? The cat and glass on Private Investigations are surely wholly in keeping?

If the music and the lyrics are good enough to convey the feeling and emotion you shouldn’t need to add cats and other spurious effects. But of course, one person’s spurious effects are another’s integral contribution. All hifi systems are different. It’s a shame you didn’t make it when we visited Naim last year. The speakers they used ripped the music apart and threw it at us. That’s when these noises can be irritants. With a system that holds the music together the noises become part of an integrated whole and just part of it. I’m digressing probably, and may need reminding what Mike was hoping to develop.

Well yes I’ve heard what that particular brand of speaker can do! But where do you draw the line with this? For the most part I don’t like too many guitar effects but some might say you shouldn’t electrify a guitar at all?

Music is for me to convey a feeling

…no matter what the music contains.

A Tragic, Happy, Sad or “Foot Tapping” feeling doesn’t matter.
Succeed the artist,…the musician conveys a feeling.
Then it’s music for me.

More difficult than that,it is not,…but at the same time.
That is precisely what is the difficult 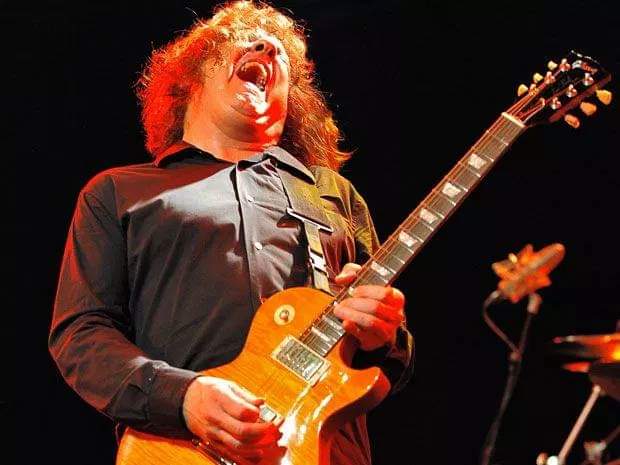 To illustrate what I mean.
Anyone who looks at this picture above,…probably understands,that the artist manages to convey a feeling.

If the music and the lyrics are good enough to convey the feeling and emotion you shouldn’t need to add … … spurious effects.

That’s a fair point, but whilst I can agree with other works, I don’t w.r.t. Private Investigations. In that particular section it seems clear to me that the composer is intending to paint a sonic picture of a damp, dark & sinister. The music - such as it is in that section - captures the atmosphere perfectly & is enhanced by these sounds, not least because of the timing of them is entirely within the music.

That’s a fair point, but whilst I can agree with other works, I don’t w.r.t. Private Investigations. In that particular section it seems clear to me that the composer is intending to paint a sonic picture of a damp, dark & sinister. The music - such as it is in that section - captures the atmosphere perfectly & is enhanced by these sounds, not least because of the timing of them is entirely within the music

It is just music, nothing more , nothing less, if you like it good, if not move on, simple.

I wonder how many people only like a limited selection because of perhaps peer pressure and not experimenting with other types because it’s not cool in their circle of friends etc?

No peer pressure on me, at school or later, not caring what anyone thought of my choice of music - yet there is far more music that I don’t like than I do, and the only music my parents liked that “rubbed off on me” was classical. I guess I’m just selective… (But much the same with other things in my life, so its just my character.)

I agree, and would add that travel has broadened my musical horizons, particularly the music of the diaspora, klezmer, and minorities such as the Roma (Balkan brass music and Hungarian tavern music). However, the current social seam of grime and rap don’t do it for me - I suppose this is a generational thing, but I don’t get on with atonal music and the likes of Stockhausen. Therefore there appears to be some limit to my musical horizons.