Is the NAS dead for audio?

One thing that worries me is the carbon footprint of online streaming. 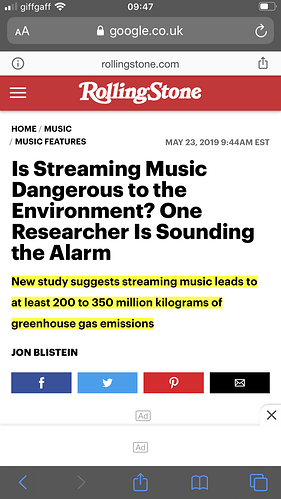 A bit like sat nav and old fashioned maps, I see cloud streaming and locally stored music as complementary rather than mutually exclusive.

A problem I often see is I can’t find the album I want on the streaming service. Okay the only site I would commonly check on would be spotify but they have the largest library so if it’s not there then it’s probably not at the various competitors either. Usually, if someone suggests a certain album or artist I’ll give then a quick play on spotify to see what I think. If the album/artist is okay then I’ll throw the money at the CD or download. However twice in the last couple of weeks I’ve seen a post on the “What are you listening to and WHY might anyone be interested?” thread and been stumped on spotify. So it’s either take a gamble with the CD or nowt, tbh, if it’s cheap, then I usually take a punt on the CD (amazon or discogs). It’s just an example of where limiting you self to what you can source from the various streaming platforms can be restrictive. I suppose it depends upon the genre of music you listen to. If you like fairly modern, mainstream, music then you’re probably going to be perfectly happy with what the streaming service can offer… maybe it’s an age thing

At least with my broadband contract I get 4G backup if my access is failed for any length of tine.

Me too. I’ve streamed Tidal through 4G too - I didn’t assess any SQ but it worked without dropouts

But the Melco and UnitiServ are NAS!

I can’t imagine a scenario where a local NAS is not my main streaming source to be honest.

My internet connection is rock solid and has had one outage in 6 years. 4K content plays instantly with no buffer time. And yet for music, while I’m happy using internet radio for music discovery, anything serious is ripped or downloaded. There are times I need to take the wheel and manually refine the tagging but not so often.

Ultimately, it’s important to me to have the psychological comfort of being able to totally unplug and go off grid and still have my music to hole up with. Whether that scenario ever has cause to become reality is another matter.

It won’t die here. All my music that I listen to on my system comes from my NAS - or what is effectively a NAS. I have a Gigabyte Brix PC with SSD carrying all my music files. Internet here is 1Mbs on a good day, disappears with frustrating frequency and is not to be relied upon. Plus, I would rather have the files myself than rely on some commercial company holding them for the rest of my life.

I guess the question is whether that is more or less than the global manufacture, distribution, and sale of physical media when those formats were at their peak.

I don’t make any claim to know.

I envisage a future 3000 post thread discussing the pros and cons of different generators… perhaps even the particular brand of scavenged petrol used for said generator or is derv better than petrol?

I envisage a future 3000 post thread discussing the pros and cons of different generators… perhaps even the particular brand of scavenged petrol used for said generator or is derv better than petrol?

For the doomsday scenario it would need to be an assessment of the effect on sound quality of the type of plant and variety of yeast used to make the ethanol for an interal combustion engine, or tge merits of specific designs of solar panel and storage batteries…

I’ll just run a generator off the hot air and guff generated by the Naim forum. It’ll go forever.

No internet, so no forum. Gosh. That really brings the consequences of Armageddon into focus.

No internet, so no forum. Gosh. That really brings the consequences of Armageddon into focus.

Might not be bad thing… IMHO there’s more bad than good re. the internet. The world would be a better place without, IMO.

Apart that forum, I have no real friends or family to share my hobby for hifi and music. So no internet would be sad.
A bit music, but no hifi/ audiophile friends.

I have just no problem with the term boutique. So I agree on that point.
But find Melco and even Unitserve/ linear ps better sounding than 2 dealer nas I could compare to.