Is this cheapest FRAIM alternative ever? ;)

Given my NAIT3/NAP90 only cost me £300 it’s fair to say I’m probably at the bottom end of the spending scale around here, until very recently they were stacked, (I’m trying to imagine your horrified faces) clearly that needed to be remedied so I made a small frame from some wood batten I had lying around and reused two IKEA glass shelves I found in the garage.
Glass seemed an odd choice to me but it cost me nothing to try, so I added ballbearings and speaker spike cups, (links below) and I have to say I’m pleasantly surprised! More of everything I liked already and more space and speed, total cost £11.45 which last I checked was cheaper than a FRAIM Lite
(upload://sF1fTyj24guxWY4CecjdTYTPwNK.jpeg) 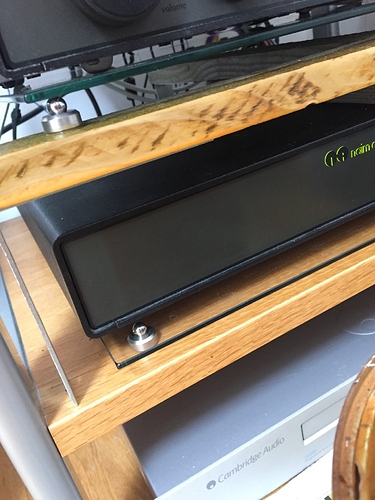 Can you take a shot of the finished product from further back please? I’m intrigued!

Edit: it looks like you already have an existing rack that you have added your new level to?

Edit 2: I was about to point out that your links breach the forum rules - and boom! They’ve gone!

Steady I’m not made of money

Hi NeilS
Yep sits inside a IKEA Journalist, must go I’m getting asked “why are you taking photos of The HiFi we’re trying to watch Hamilton!” 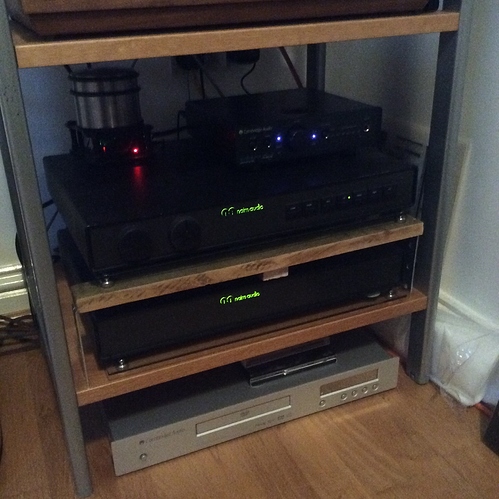 I appreciate that you’re on a budget & it looks rather good - well done!

I’d be thinking of a way to make your floating shelf sit on three points rather than the flat end of each bracket.

I think the easy answer is legs to screw to the 90 degree bracket would add some regidity and you can but a spike in too.

Cheers, I’ll look at terminating the legs better. What convinced me support was significant was a prior experiment with wooden cones, that made a difference alright, it ruined the sound by a surprisingly big margin. This is clearly better though I’ll confess I’m not sure how so many “hard” materials isolate. Do they act like some sort of low pass filter as though won’t resonate at low frequencies?

The criticism I have of your current isolation is that if you imagine removing the item from the top of your new shelf, then place a big disco speaker next to the rack and play a fixed low(ish) frequency at high volume, I think your shelf would begin to “walk” across the shelf below. You don’t really want that.

So a single point of isolation on each of the three legs would prevent that & I think you’ll notice a difference.

Is that a Lidl doorstop I see at the back. I thought I was the only person ever used those for vibration reduction.

I have Pi/Allo DigiOne and that’s a John Darko tip, I couldn’t hear much / any difference but it stopped it moving around, but then my youngest daughter asked if I’d been spending money on the stereo again! Quick double blind she could easily identify when it was on or off, I can hire her out for personal shopping duties.

And that one, from a member, not bad ? 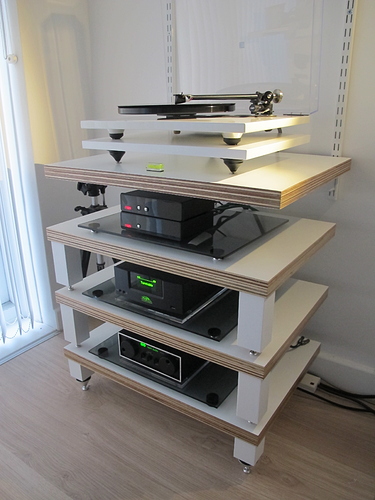 I love the way that more shelves can be added and the turntable just moved up !

Thanks for that FR

I remember that set up - its currently boxed up and stored in my loft! Construction is simply 18mm hardwood plywood sandwiched and then painted. Next time I’d laminate the ply for a more durable finish.

Equipment all the same, but I managed to reorganise my studio to allow more vertical space to fit a Rega wall shelf and and still have the space to employ my old 90s Soundstyle rack, which was often combined with Naim equipment in the 1980s and 1990s PF (Pre Fraim!) … 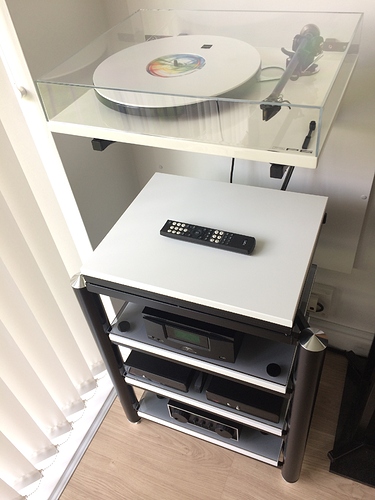 Some great budget ideas: as someone who’s system is pretty expensive by the standards of normal people (who they?) but often regarded by forumites - in a non-critical way - as pretty budget, I’m all in favour of cheaper inventive solutions.

Talking (vaguely) of a pre-Fraim paradigm, what was considered the best support option ‘back in the day’? I’m thinking 1980s CB times in particular. What were the common recommendations from Naim/dealers back then?

I seem to remember dealer equipment racked and demonstrated on Sound Organisation (which I bought and liked) and Target in the mid 80s when I bought my first kit. Then Soundstyle came along with either their fixed or modular stands (late 80s / early 90s IIRC). I thought this approach was really neat solution having three legs for ease of levelling, and a new level could be added as the system grew.

I have door stops on my pi’s to, it’s not for sq as they make no difference but as they are so light as soon as you attach a decent cable to one it moves any which way, with a heavy door stop it’s going nowhere easily. That’s the reason John Darko uses them, I thought it was a good cheap idea.

I’ve heard Darko say he can hear a subtle difference but yes mostly cos any darn cable either pulls it off the shelf or up in the air!