So often I hear how good Japanese releases are. I must have dozens of albums that are Japanese reissues/releases/remasters and they’re generally excellent.

Why are they generally the best releases to go for? What do they do to the albums that no-else can?

I’m not sure they are always the best. If we’re talking LPs then the Japanese always seemed to be able to get the vinyl, the pressing and the presentation right, and the Obi strips and extra inserts that came too were always rather lovely to have. However, while the vinyl was usually very clean, and the pressings generally immaculate, the sound was not always that great. Best was when they pressed from an original cut - then the results could be superb. However, local cuts could be variable - digital had entered the chain in a lot of places by the mid '70s and it was still quite rudimentary with a definite “early digital” sound signature.

As for CD, most of the very early CDs were pressed in Japan. But even here, it’s a bit of a minefield. Some sources were good, others not. There was also a fair bit of pre-emphasis used in the very early days, and if you can’t compensate for that then the results can be way too bright.

Purely related to CD, some great recent Japanese compilation releases have made their way to me. Linda Ronstadt, Kool and the Gange, The Smiths all spring to mind as having some releases in Japan that simply don’t exist in any form outside of Japan. Those spring to mind also because the mastering on them is superb and there is no rough equivalent to the album elsewhere. It does mean having to create all the metadata from scratch though when ripping and nabbing album art from Amazon.jp

Which is odd because the mastering and compression applied to Japanese artists puts those albums firmly in the unlistenable category. I honestly mean the discs are used as coasters or make it to the bin - the compression is that bad.

As for more general stuff like versions of albums available everywhere, there are sometimes Japan-only bonus tracks.

Since I’ve built 80% of my collection whilst living in Japan, I’m not always aware a release is unique until years later.

Sue me but the obi attached to CDs have little value to me and I generally bin them along with supplimentary Japanese translation books of the liner notes (they make it hard to shut the case).

I’ve a significant amount of Japanese import CDs from trips to London and Manchester in the early to mid 1990s. The sound quality is variable but when it’s great it’s really great.

When I worked at Tower Records’ flagship store at London’s Piccadilly Circus in the 1980s, I was given the task of doing stock transfers from the stores in Japan (I had a VERY rudimentary knowledge of Japanese) – Piccadilly was famed for having the biggest and broadest selkection of Japanese LPs (and to a lesser degree, CDs) in the UK at that time. As a result, and thanks to a 30% staff discount [off cost, not retail!] price, I was able to build up a collection of about 600 Japanese LPs.

As @Richard.Dane says, the vinyl was always silent and flat, the packing superior, and there were often bonus cuts; but the sound wasn’t always better.

Although it often was - for example the early 1990s MMG-pressed “Led Zeppelin Analog Series” LPs I have sound great. Similarly, I have every Floyd LP from Piper to Final Cut (and including Relics, Works and A Collection Of Great Dance Songs) on Japanese vinyl and they all, with the exception of Piper, sound wonderful. The 1976 Toshiba-EMI Pro Use DSOTM sounds amazing – quite unlike any other cut of that album, very “big”, very lush and very wet. Whether it’s better is of course a matter of opinion but it certainly sounds different.

I also have all the Joy Division, New Order and Durutti Column LPs that Denon cut in the 1980s for Factory/Nippon Columbia, and they sound bloody great, as do my late 70s/early 80s RCA Bowies, an 1970s “Electric Ladyland” and some Island and ZTT albums on Polystar.

I worked in WC1 in the 1980s. A few shops in Charring Cross/Soho, and latterly Tower Records in Piccadilly kept me well stocked with Japanese imports of my favourite stuff. The CDs can be variable, as mentioned above. The vinyl was always top quality, as was the packaging and print quality.

More care was taken with higher quality starting materials and it showed. The crap we still paid significant money for, from the mainline high street record shops was frankly the industry taking the piss. Same as they always had and always will. A selection of my Japanese vinyl would occasionally be ceremoniously played at the week end (usually Sunday afternoon). The whole process, from reaching for the sleeve, to putting it back again, was a very carefully performed ritual. They were also copied onto MA90 without noise suppression and these tapes were used for playback 99% of the time to prevent wear and damage to the vinyl.

I couldn’t get my hands on a CD player fast enough, to break free of this semi religious and often tedious mucking about. A shame CDs sounded so rubbish initially. But at least they were cheaper than buying an LP, sourcing a Japanese version of it if I really liked it and making a copy to meal tape. 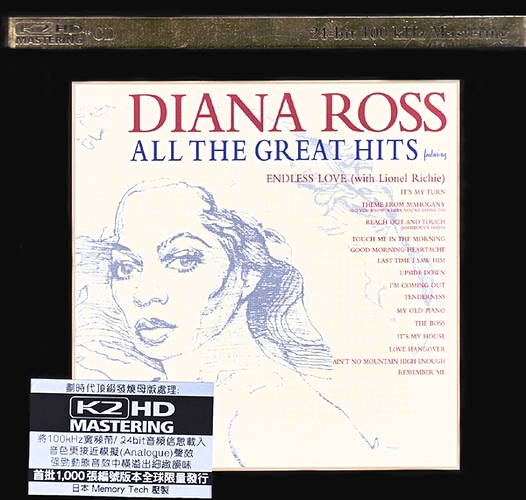 Yeah most Japanese pressing sound great but this one…
Clipping and loud very loud… and expensive.
As a fan you tend to buy everything that is released but this one makes you go back to the 2000 pressing