Not sure if this should be here or Home Theatre but I think it raises an interesting question.

How much does accompanying video enhance your musical enjoyment?

Had managed to 85% declutter the old listening/AV room by around 6pm last night.

Did I really want to shift an active SBL system from A to B them, no.

6-7 year old 1080p DLP projector plonked on an occasional table in front of the sofa.

Projector and an AppleTV 4k powered by an extension lead from the alcove.

Wait for it, audio!

Turn to audio - had snagged my daughter’s HomePod some time ago to test, so figured that was a quick audio solution so plonked it on a table below the projected image and started playing music videos and later TV, audo via Airplay from AppleTV 4k not wired.

As per thread title, my jaw dropped - the Homepod produced unbelievably enjoyable room filling sound on concert videos and family TV (current Dr Who which is surprisingly spectacular).

The whole setup probably cost little more than a £1000 but I’d happily live with it visually and sonically even in mono.

Will be interesting in coming days when I move the active 282/2x252/ SBLs/LP12/‘proper’ sources in to see how they compare.

Apple discontinued the original Homepods - they seem to be darned good, even in mono.

It’s a shame they got rid of optical out on ATV as Airplay can be fiddly with lip sync issues, but all seemed in-sync last night over Airplay to the Homepod.

I bought another 3 Homepods before they sold out, primarily to give me a pair for compuer usage and allow daughter to have a stereo pair in her room.

Apparently they supprt Dolby Atmos so it might be even more interesting to see how unobtrusive small form factor devices work compared to my full-blown older 5.0 surround system. (5.0 as my Epos 14s went so low as rear surround speakers I didn’t think I needed a sub). 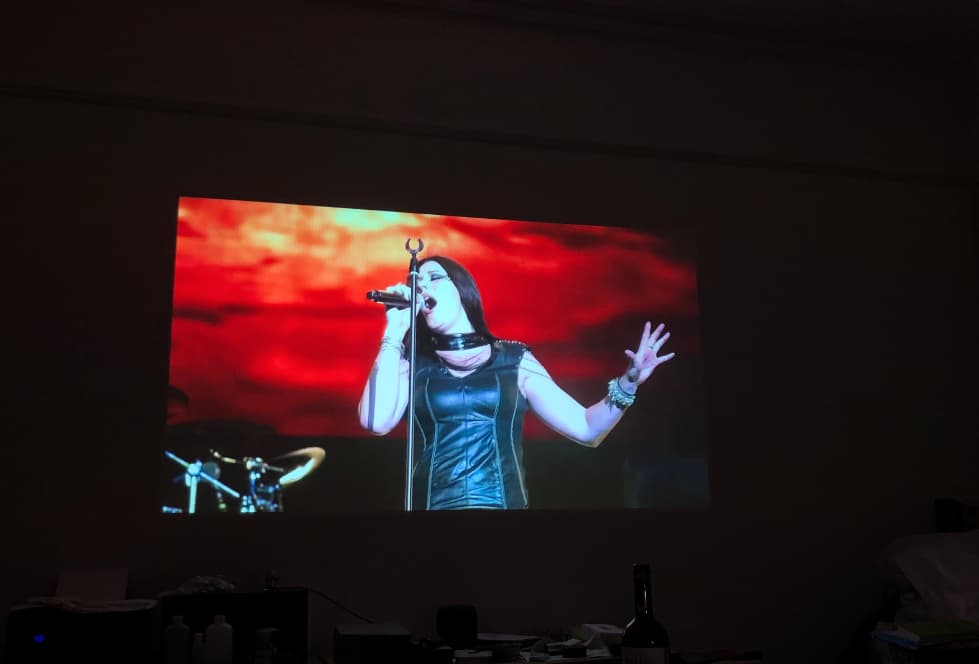 I do have a couple of speakers in the ceiling for atmos but not sure if they have really done anything much - not sure what I have watched that has had atmos either. But watching stuff on apple or Disney is just great fun - interesting it’s possible with simple speakers too. I love the projector view (not got a screen myself yet but the wall is going to be painted yellow so will need a screen)

That wall unlike the other 3 is an off-white, just thought I’d try it before getting a screen (and painting the 4th the same colour!).

Immediately below Floor the vocalist is the Homepod, bottle of wine is far closer to seating and projector in front of sofa so may look closer to screen. Bottom left below screen there’s a Project record cleaner/assorted fluids and an Epson printer to its left.

Rather than behind in the bay as it used to be the projector is temporarily in front of the sofa, I’d probably get another 40% screen size when it goes to the original position behind the sofa above our heads.

Projectors are such great value for money.

I just added ‘AV’ to thread title, but didn’t really intend this to be AV only.

Many of you must have comparatively inexpensive combinations which punch well above their weight.

I run ATV 4K through my main system and the sound quality has certainty improved quite markedly with Apple streaming over the last year or so.

I connect the ATV 4K to the TV using the HDMI audio/video ports, then run an optical audio out to the NDX2 with the TV set to PCM audio. For the 4K bluray, I also run an coaxial output to the NDX2 to bypass the TV.

A Qacoustics soundbar screwed into the wall above the tv has amazed me for the £150 I paid for it!

Thanks that’s also what I do myself. Yes I agree that Apple TV 4K improves the sound quality

ATV 4 models onwards lost optical out. I used to use Airplay to a Nova which gave lip sync issues fairly frequently. I now use HDMI ARC to the Nova. Interestingly that could pose issues in the other room as an older much longer HDMI cable is not HDMI ARC compatible, nor is the projector. May have to resurrect a beast of an AV amp which I hope has 4k passthrough though probably does not have other newer features.

The only way to connect to a Homepod is Airplay which is one of its popularity failures, no aux in or Bluetooth.

If you run a long ARC connection, you have to use something called a balun to run the signals over Cat6 and then reconvert to HDMI. I had to do that due to an outdoor TV that connects to in wall audio. The amps are all in an indoor cabinet/rack, so my installer used some sort of boxes to do that. Works great, no lip sync issues!

I had a long powered HDMI cable purchased several years ago that worked well even without power, but it didn’t support ARC.