I am not asking for names - I know the forum rule - but are there any stockists in the UK mainland. If not, I will stop looking

Have you contacted them direct and asked ?

Not yet. They are French and do not show any UK dealers on their website. If no luck on the forum I will have to gird my loins and do a bit of schoolboy French!

Bon chance mon ami!
I’m sure @frenchrooster could assist you.

Could unfortunately not assist . I can only read via google that there is a dealer in Dublin, the Listening suite, who have them.
I don’t see any UK distributor.
Maybe buy online, from France?

I can highly recommend the Dublin dealer (actually their showrooms are now in Wicklow, not far from me). I have had them out to me over the last few weeks setting up my modest system from scratch and it is now sounding wonderful.

I was in their showroom last week listening to some equipment and I am thinking of trying the JMR Lunna floor standers. The place is run by two guys, one a former studio engineer and they are great to deal with. I’m sure they could tell you all you need to know about the speakers you are interested in.

I see from your profile that you have a full 500 series system with Kudos Titan 808.
Jean Marie Reynaud don’t play in that category. Is it to downgrade or for a second system?

I see LSFAN is so impressed that he’s taken his monniker from the shop! Fair play to him. It is for a secondary system to replace Kans which are fed by an old Unitilite. Which are the right JMR speakers to go with the Unitilite? I worked out that Dublin was a supplier but it’s a long way to go speculatively. That said, what’s not to like about a weekend in Dublin’s fair city!

Ah - it’s LSLFAN actually and a reference to Leeds - no connection to the dealer!

But a phone call to them might give you the information you require regarding matching - they usually get back very quickly (as my bank balance will unfortunately testify to!!).

So why bother specially with JMR , if I may ask? You have a lot of speakers in UK to go with Uniti, like Proac tablette, Pmc, ….

I will have to gird my loins and do a bit of schoolboy French!

Or use Google Translate. But do a reverse translation to check before sending!

JMR speakers shouldn’t be dismissed offhand - a friend of mine has a pair of Orfeo Supreme, they sound excellent.

Yes, but they are not distributed in the UK. And the OP needs speakers for a second little system.
I heard JMR once at dealer place, didn’t liked them. But other enjoy a lot.
However I think they are not particularly exceptional, and many other brands are easier to demo in UK.

Merci beaucoup, Monsieur frenchrooster. I am glad to see that Brexit has not made you unfriendly to nos ros-bifs. I went on their website to inquire about UK availability. It asks for far too much information. I gave up

One other aspect: the aesthetics of these JMR, in general, don’t do justice to the french elegance

Agreed that if the OP lives in Britain, there’s little point in getting speakers that are not distributed here.
A lot of people like them however - but I agree with you concerning looks (the wooden housing for the tweeter looks terrible).

I owned a couple pair of Reynaud’s including Duets. Some of the most musical speakers I’ve owned and have had a menagerie of Naim, Linn, Spendor’s, Totem. AE1’s, Neat, Russell K, blah, blah, blah. I leant my pair out to a friend without any fanfare who had a SN1 and CB Nait 2 and when I retrieved them a month later his comment once gone was “Jim Morrison is no longer in the room”. The Reynaud have a liveness (is that a word?!) which is unmatched. My friend immediately ran an ad and got a pair of Bliss Silvers and immediately sold on his Harbeth P3’s. Believe that was about five years ago and last I heard he still loves his Reynaud’s. The photo is of my Duets but his room and photographic talent.

No speaker is all things to all people but they come awfully close as very easy to drive and not fussy about rooms and have the great transmission line bass. The older models to me our even more special as the father was a chamber music fan and for me likely one of the best speakers for that genre but play it all. So yes I am a fanboy but sadly broke up my French system of Audiomat, Actinote and Reynaud during a period of audio insanity. I’ve recently gotten another French amp and will be looking for another pair of Reynaud’s.

I’m always surprised in how little is known of this brand as they embarrass many better known brands when it comes to that elusive musicality. This is a hobby after all and for me it has always been about taking the road less travelled…which is how I first come across a Nait 1 so many moons ago. At the very least make an effort to hear a pair. 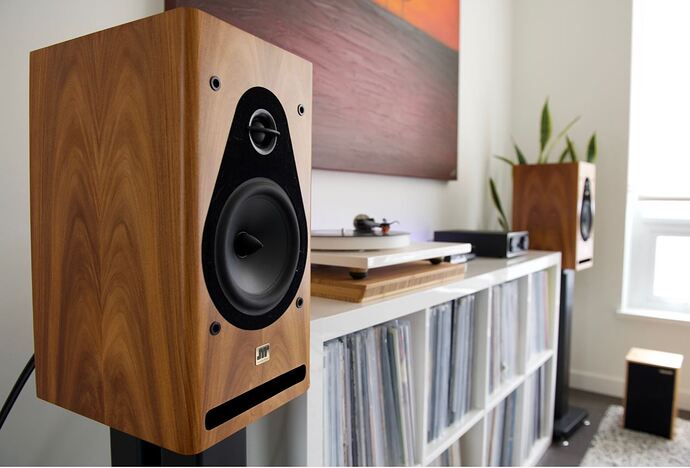 Darn it! The search goes on. I had just about binned the idea but you have re-ignited it. Only joking, you are right - it’s a hobby and a multi-factorial one, at that. What’s the right level/speaker to replace or be a brother to the Kans?

Brother to Kans? Likely not a close kinship in either design or sound signature as owned Kan2 and stands for many years and only other speaker that came close for me was nSats which I adore. Having said that the Duets (Bliss) are a whole other level of musical enjoyment with just a bit less spice but a more satisfying meal offering many more courses than a Kan.

I ran both Twin MkIII and Duets happily with both a Nait 1 & 3 but also with Olive shoeboxes so the UnitiLite will readily match any of JMR current stand-mount offerings such as Lucia, Folia Jubilee or Bliss Jubilee. There is a great deal of guidance on the Amherst Audio site as Bob Neil is likely the English speaking expert on the brand which he has imported into North America for many years.

I tend to play in the used speaker market and you being so close to France I’d like to believe it would not be difficult to source Bliss (aka Duets) or Bliss Silvers. These would grow with your system should you move up the Naim amplifier food chain. Unfortunately the distribution of the JMR has been spotty in Canada until last couple years but like a lot of French gear they seem to be happy with fulfilling demands of their local market vs taking over the audio world. As stated earlier, JMR speakers are well worth the effort of seeking out.